Meandering Away From Damascus
by Brian Spears 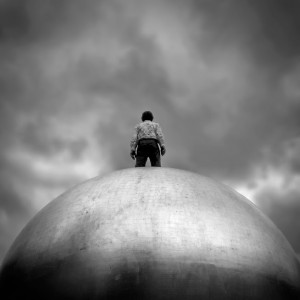 I was baptized as one of Jehovah’s Witnesses in 1984 at the age of 15. I’d been raised in the church and looked at fellow Witnesses around the world as family. Eleven years later, I left the church and with it, my families. That might make me a metaphorical orphan, though I usually think of that condition as one which happens to a person rather than one which a person takes an active role in. It’s like that definition of chutzpah which involves children who’ve murdered their parents asking the court for mercy because they’re orphans now. Only I didn’t kill anyone. In a sense, I died, which I guess makes me a reverse orphan.

Or it makes me a Jesus figure, only atheist, (I wear sandals and have a beard, though, so that part’s close at least.) and this second earthly life has lasted way longer than three days.

My journey away from belief wasn’t the instant snap to the opposite pole you hear about so often in discussions (criticisms?) of the New Atheist movement. Very often, according to these narratives (rarely written by unbelievers, I might add), there’s a reverse Saul-to-Damascus moment, where the former believer has an epiphany that everything they’ve believed is false and suddenly they’re overcome with the power of rationality and skepticism. I’m sure those people exist–they must do, as their believer counterparts are out there; I knew my share–but just as they’re a rarity in the believing community, there aren’t too many who identify that way among non-believers.

This much is true: when I left the Witnesses, I never considered joining another Christian religion. I was tired of doctrine and had begun to see how contradictory the Bible was, and I needed a break. I explored the vibe of other churches–I attended midnight mass during the first Christmas I celebrated (which I still celebrate, atheist tho I am); I went to a Baptist church with one of those huge choirs and danced in the aisles, fully enraptured in the joy of the moment; I sat with some Unitarians and listened to them plan the work they were going to do in the community–but none of this was with the intent of joining. I was exploring in the anthropological sense, experiencing worlds I’d only read about through the lenses of Jehovah’s Witness literature. And while I saw that these places were not quite what I’d heard, neither were they the kinds of places that I wanted to be a member of.

The biggest part of my journey might be due to a change in habits. For 26 years, I’d gone to a religious meeting three times a week, and done public preaching at least once a week. When I stopped going, it was like the ringing in my ears had stopped, but I’d grown so used to the ringing that I hadn’t noticed it was there in the first place. I started to hear other stuff for what felt like the first time. I got to be a different person without feeling like I was performing for a group of people, or more so, for an invisible Father who was watching my every move. Mind you, I wasn’t an unbeliever yet–I still bought into the idea that my parents’ beliefs might be correct and that I was giving up  future eternal life in paradise in exchange for this freedom. It’s just that I was okay with the trade.

But imagine that: suddenly you have an extra 15 hours per week on average to explore yourself and this world you’ve only ever seen through a very limited and sheltered perspective. What would you do? You’d get high is what you’d do. You’d trip balls and drink until your head exploded and try to have sex with everyone and maybe you’d look for the religious experience in it all, because everything you’ve ever done has been in the context of religious experience. You’re looking for epiphany, for ecstasy (not the drug), for a way to grasp the universe in your teeth and shake it like a puppy does its favorite chew toy. And eventually you realize that church isn’t popping into your head as much anymore. You’re having these insights and revelations and maybe you’re still attributing some of that to a deity or cosmic force, but the pastor/elder/priest voice you’re used to hearing interpret this stuff is fading, and you’re doing more of the work on your own.

At least that’s how it worked for me. I can’t really say when I first admitted to myself that I’d stopped believing in a personal God who interferes with/aids people, because it just happened, natural as breathing. I made a brief stopover in agnosticism, that comfortable way station for people who understandably don’t want to take a definitive stand on the big question, who are more at ease with saying they just don’t know, but once I realized that what I’d thought about as God couldn’t really be defined as “a unifying force in the universe,”* I made the jump.

And I think maybe I became a better person for it. I know I’m not as judgmental as I used to be, and I feel like when I do something nice for someone, I don’t do it with the expectation that some invisible being is crediting me for it as one small plus mark against a miles-long tally sheet of all the bad shit I’ve done in my life. I don’t hate myself as much as I used to, that’s for sure, and because I look at this as the only life I’m absolutely sure I’m going to experience, I try to get a lot out of it. And that affects every part of my life, from my art to my politics to the way I treat strangers and family alike. Contrary to what many religious folk claim about atheists, we are not nihilists. Rather, we recognize the importance and immediacy of this life more than anything else, because we’re not looking forward to heaven, whatever that looks like, or paradise on earth or the next spin on Fortuna’s Wheel. This is the one we’ve got, so we’ve got to do it up right.

* A little note about this definition and why it’s important. On the question of whether or not there is some grand, unifying intelligence in the universe that may have contributed the spark that set all this in motion, i.e. what existed before the Big Bang, I am still agnostic. I don’t know what it was, probably can’t know, and am at peace with that. Some people call that God, but if that’s God, then it doesn’t really matter if I believe in it or not because it’s not looking for worship, or at the very least, ins’t punishing us if we don’t worship it. The God I am pretty sure doesn’t exist is the supernatural being that knows all, sees all, and occasionally sticks its finger into the lives of individual humans and either makes things awesome or really, really shitty for them. There is absolutely no evidence for such a being, and until someone produces repeatable, empirical data proving its existence, I work from the assumption that it doesn’t.

Brian Spears is the poetry editor of The Rumpus and author of A Witness in Exile (Louisiana Literature Press 2011). He lives in Des Moines where he currently teaches poetry at Drake University.