Bread or Alive by Daniel Fraser 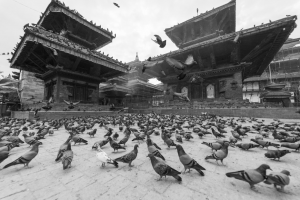 I’m not in hospital anymore, I’m in the garden. At the back, there are trees. Maples with big flat leaves, a beech with a bent trunk, something with berries. It’s a bit of in-between land pressed in by houses; brambles and a broken shed, a kind of nowhere place. Cats and foxes use it for fighting and fucking and pissing, sometimes all at once.

I’m half-dressed and throwing stale bread over the fence so birds can eat it. A few sparrows watch me; there’s chirping. I’ve got this chunk of baguette ready, all hard and crusty.  A voice from somewhere else but somehow still inside starts talking and telling me that my whole life is there inside this piece of bread, that the bread knows my future like some tea leaves or a woman at the circus, and when I throw it the bread will map out my future for me, a kind of prophecy.  If it sails straight over I’ll win the lottery, quit work, fall in love, buy an island, become a famous painter, live forever, and never be sad again. If it doesn’t make it over the fence I’ll stay miserable, swallow a nest of wasps, cry into the abyss, get stage four bowel cancer, and be dead within six months. I hold up the bread lump. It’s only a stupid game but I’m tense now, like everything’s real. I make the sign of the cross and focus myself like an athlete on TV. My heart shakes.

I go for a shot-put/basketball-hook-shot-style throw. The bread goes flying up. It hits twelve branches, ricocheting through the leaves, before finally scraping over the fence with a limp thud. Along the way, part of the bread detaches from the main life-trajectory, fails to clear the fence, and falls down into a dark patch of ivy covered in bird shit and spiders. I feel a bit confused and a bit depressed, like there is a tarot reading in front of me that I don’t understand but know is bad because all the cards are upside down and on fire. My head makes a pun like ‘violence baguettes violence’ and then forces me to hear a version of an Elton John song but with all the lyrics now about bread. I say ‘Talking Breads,’ and then ‘Bread or Alive,’ out loud to Hilda who is lying under a bay tree letting things crawl up inside her fur. She doesn’t move when I talk about bread. I pet her and tell her I’m stupid and bread is stupid. She purrs.

My phone rings. I don’t know the number but answer anyway. A machine pretending to be a woman tells me I have been in an accident that wasn’t my fault. I put the phone down. There’s a message from Clara, ‘how are you?’ for some reason she’s attached a picture of Christmas tree.

‘A woman just called me,’ I tell her, ‘a robot woman made of insurance. She says I’ve been in an accident and now the world owes me money. She told me nothing was ever my fault.’

Clara writes, ‘cool,’ and then, ‘maybe you were in an accident, you hit your head and now you can’t remember. This is all a dream.’ I smile in a way that makes me wish she could see me smiling and write, ‘I think she means life, life is not my fault.’ Clara types, ‘stop being you,’ and then a set of symbols that should have translated into a smile and a kiss but have got all clumped together. I like Clara. Clara lives with me. When I took an overdose she came to the hospital and told me not to take another overdose. I want to tell her the story of the bread oracle but decide to wait until she gets home.

I’m upstairs now. My head is warm. The laptop is warm. Sweat trickles down my arm. I look up “amnesia” in an online dictionary and make a joke either to no-one or the government agents living in my webcam about not remembering what it means. I notice the sky. The cloud has broken up, there’s blue there now. I take two more lithium tablets and sit on the sofa drinking tea. I put the TV on and switch to the 24 hour news channel, just news forever. People are dead or they are still dying, animals are dying, plants are dying, there is not enough ice and no more trees, everything is either underwater or on fire. I want to feel sad but don’t. I am in a box made of medicine. All the drowning and burning passes through me, like music I don’t really care about but leave on anyway because it’s already on and it’s something that’s happening, eating up time, helping it go.

In the sky there’s a lot of sun. A squirrel happens. Birds move about. The last third of my tea is cold. I put a new teabag in the cold tea-water and fill the mug back up from the kettle. Steam rises. I look out of the window and at the window at the same time. The glass is smeared. Hilda rolls over in the dirt. There’s no wind. I put on overalls and go into the garage. There is a painting on the easel. White squares on a white background, lower down some grey streaks, all even like grass but not green or connected or alive in any way. I put a sheet of gold leaf in one corner and crinkle it. I add more white.

I feel damp and dry at the same time. My tongue is all glue and needles. I say the word ‘tropical’ for no reason and click my fingers like I’m about to dance. I put down the paintbrush. A sort of anxiousness shaped like a hollow sound whirs up from an undefined place inside my belly. I start to think something bad will happen, a big kind of all-encompassing death, the stars and sky swallowed by a black storm of space fireworks. Then I think I want it to happen; yeah fuck it, bring it on.  No, it wasn’t me, another inside-outside voice. I don’t want it to happen. Keep the stars, keep the sky. I look in the bread bin, it’s empty. I find two slices frozen in the freezer. I unwrap the frozen slices, press one to my neck. I like the icy bread feeling. I slap myself with cold bread. It feels cold. I stand in the garden and look at the scrubland. I pretend I can hear a crowd roar. I hear them roar. I pull back my arm, feeling the bread-frost crawl up my fingers, and get ready to try again for a different kind of life. 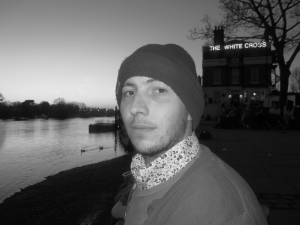