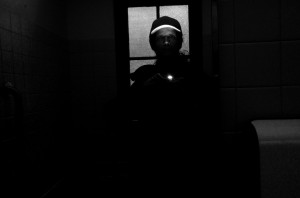 Me and Vassily, one day we take the el. I like riding the train. Vassily, he likes driving, but his limo is in the shop, getting an oil change plus detailed. I hope they clean the piss out of that car. The front seat is a fucking pigsty. I think we’ve talked about this before, but yeah. He’s kind of a slob up there. So we hop on the Blue Line; he wants to head out to the airport, to O’Hare, see what everyone else is driving these days. Maybe that’s what limo drivers do. I couldn’t care less; I just want to get out of the neighborhood for a minute. I used to go to the airport when I was a kid, watch the planes take off. Man. That was so cool. Back then you could even walk onto the planes without a ticket. One time I was with some buddies. We walked around, went to the cockpit, were shooting the shit with the pilots, talking about flying and whatnot. After about 10 minutes of talking and fucking with all these switches, one of them says,

“So hey. Going to Kansas City, huh? Do you have family there, or…?”

The pilots laugh. “You are now,” they say.

“Hold on a minute,” he says around the cockpit door. “Don’t close that up yet. You better let these boys out. I guess they don’t want to go to Kansas City.” “Hahahaha,” he says. “Don’t forget your wings.”

But now, nah. You can’t do that anymore. Shit. Can’t do nothing no more. But still, it’s ok to look around, see all the different people. Like the woman who knits her own hats. Who lives alone. Who’s prepping for old and age and solitude. Cool people.

But you meet all kinds of people at airports. And sometimes coming or going to those airports.

Ok. Well maybe you don’t meet them, maybe you’re better off not meeting them, but you meet them in your heads, and well, yeah. You know you shouldn’t meet them.

We met a couple of them. On our way home.

They got on the train at Belmont. I know that neighborhood.

So I’m looking at these two guys, occasionally in the face, but mostly their reflection in the glass. The one is pretty intense, and his eyes move around a lot. I’m pretty sure his name is Boy Joseph, full name only, and NEVER the initials. His buddy is Ned Lick (usually rendered Nedly).

This Boy Joseph cat’s got red medium length hair held back with sunglasses, like a manband, a guy’s hairband, he’s a 42-year old Irish gangbanger eating a sandwich, mouth wide open the whole time, bologna and miracle whip and shit coming out when he chews, black tank top, Black Panther leather jacket one or two sizes too big, a shitty version of Gary Oldman’s Jackie from State of Grace, whitegold eyebrows and a red, red face, smugasfuck eyes looking at everyone on the train as his future victim. And if you peeled off that skanky tank top, you’d find that he’s kind of guy who jerks off to the Nüremberg journals and has bathtub drain plug rings in his at-home nipple piercings.

Nedly is his crew-cutted duller than a boiled egg fart sidekick with the low-key perpetually surprised face of a barely-functional dipshit whose plodding approach to criminality is as rigid in its application as his sinister sometime-boss and all-time “best friend” Boy Joseph.

Vassily is kind of nodding off, dreaming of Ukrainian goat fucking or whatever, and doesn’t see what’s going down here, so I keep going, checking them out.

Boy Joseph and Nedly lost the benefits of their whiteness at about age 23 and then the longer prison stretches came. These two are up to more no good in one day on the outside than most people can imagine in their heads—drunk, high, or flat out lunatic. I look close right quick when I see they’re preoccupied with intimidating my fellow train lovers, starting to zero in on a victim, and looking at their eerie glow under the buzzy lighting I think white folks aren’t pale, they’re just continuously haunted…and for them, the fascination with Lestat and Hannibal Lecter, those cleaners, those refusers of freckles and the shallow and the subpar, reveal that haunting.

I’m not afraid of too much. Sometimes I think about things too much, like the conversation you have at that certain age; the one that connects old to young, when you have to decide which is worse, waking up in the casket under six feet of dirt, or headfirst in the locked oven, the gas jets just turning up. Like that. But people? Not too much. I remember this one time I was working at Dreamerz and The Mentors played upstairs. My girlfriend at the time (who is way less afraid of people than I am) refused to wait on them, so they were more belligerent than usual. They finally came downstairs as I was closing up the bar. Because I am who I am, we were all getting along good, having some drinks and doing the white. I still had to close up though, so I was wiping down the tables after doing lines. I finished one and I looked up to see Il Duce leaning over the bar to grab something out of the cooler.

I walked over, grabbed a cocktail straw out of the dispenser on the bar next to the napkins and stuck it in his ass crack.

So, yeah. Not afraid of much.

I watch these two watching people. Well, ok, let’s be real, it’s Boy Joseph watching people, and Nedly digging blackheads from his neck and smelling them. Boy Joseph’s eyes light up when he spots, on this heretofore arrestingly dull day, a woman, Misty maybe, but really Ruth, or Lisa, who looks like a stripper on her day off trying hard to not look like a stripper on her day off. That she looks this way is not in any way an invitation to victimhood, but Boy Joseph and Nedly…don’t care.

She knows it, knows that look Boy Joseph is giving her.

She looks up at the route map above the doors.

Next stop we’re about to head underground, and I watch her calculate, say fuck it, and make to get off this goddamned train.

“Why doing this to poor Vassily?”

“Just trust me, man. We’re getting off at the next stop.”

“Fine, fine. But owe Vassily drink. Is this Polack neighborhood?”

If we get up now, it won’t look like we’re following Boy Joseph and Nedly who I know are about to get off and pace this woman.

We stand at the doors at one end of the car; she stands at the other end.

Boy Joseph and Nedly get up, stand behind us. All I can smell is bologna and curdled miracle whip, white bread and rank vodka. Maybe even some Richard’s.

When we hit the underground, the lights kick on in the car and buzz back the reflection of Boy Joseph staring at my neck. Vassily senses what’s happening, does what he does.

“Holy shit, smell like some goddamn bologna here,” he says.

Fuck. I try not to laugh.

Boy Joseph runs his thumb and forefinger down the corners of his mouth.

Nedly farts, or has exhaled and needs to see a dentist.

The train stops and we get off.

“The doors are closing.”

I slide my eyes over to the windows whipping by and watch Boy Joseph watch Misty.

She stops by a stanchion. Waiting for the next train, looks like.

Boy Joseph and Nedly look at each other. Scheme. Try to figure out what’s up.

One train goes by. People come and go.

The platform clears out.

Boy Joseph and Nedly dart their eyes around. Nedly pisses off the platform, but never hits the third rail. Too bad.

They stare at her. Try to get her attention. Get bolder. Threaten her with their grimy white faces. Look over at us, but we just chill.

She gets up from the bench, walks over to the other side of the platform, looks down the tracks for the train, the one that goes to the airport. It’s all quiet over there.

They walk around the maintenance room in the middle of the platform, come out the other side, make directly for Misty.

And just as the train comes in, she pushes back.

Theodore C. Van Alst, Jr. is an Associate Professor at the University of Montana. His short story collection about sort of growing up in Chicago, Sacred Smokes, is forthcoming from the University of New Mexico Press. His fiction and photography have been published in The Rumpus, Entropy, The Raven Chronicles, High Desert Journal, Indian Country Today, and Yellow Medicine Review, among others. He is co-editor and Creative Editor for Transmotion (an on-line journal of postmodern indigenous studies) and his edited volume The Faster Redder Road: The Best UnAmerican Stories of Stephen Graham Jones was published 1n 2015, also by the University of New Mexico Press. 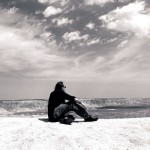