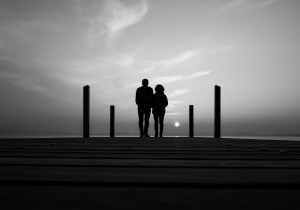 I found your fingernail in the living room. Chances are, it’s three months old and has evaded anywhere from six to nine tussles with my Dyson, and that’s miraculous, because, you know, Dysons are famous for their inimitable suction. But no: you are survived by your fingernail. I imagine this particular one—an uneven, milky curvature— once capped your middle finger. This makes me laugh.

I can and cannot believe that you are survived by such a nuisance. Such a sad relic, calcifying peacefully in a bed of loop carpet until I had the chance to step on it. Your middle finger’s fingernail sank into my sole like I was silly putty.

You took me to task for things like leaving food out overnight, or a little splash on the toilet seat, but you clipped your nails everywhere: the dining room, the nursery, our bedroom, the living room. Sometimes, at the kitchen table. A hallowed place where we used to divide dinner into threes and ate all we could before I absentmindedly left the lasagna out.

Clip—pause—clip—pause—clip. A symphony of tiny slaps. You collected them on a Dixie plate, but every now and then one would ricochet off the clippers like shrapnel and we would never see it again. Until we stepped on it. Or vacuumed it. Or our son tried to eat it. It was a nasty habit.

I liked when your nails were still attached to your fingers. I liked when they were long enough that you could comb them through my hair, pop my pimples, scrape scabs of toothpaste off the sink, dig sunflower seeds or Play Dough out of our son’s nose. You were better than any pair of tweezers, stronger than needle-nose pliers.

When I think about your sufficiently glorious fingernails, I think about the night that albino lizard made its way into the bathtub. You hadn’t even noticed it until it climbed right up onto Adrian’s plastic turtle, which you had hysterically forbidden me to throw out when I tried.

I remember how I’d gone to grab a cup from the kitchen to trap it, but you took matters into your own hands. You pinched him by his tail—too tightly, when he started to squirm—and tossed him out the small overhead window. I told you he must have been drawn to the porcelain for camouflage.

“It’s pitch black out there. Essentially you flung him to his…”

You were quietly inspecting your nails with the kind of focus I hadn’t seen in months. I realized that you were trying to toggle something free, something was lodged underneath of one them. You set a rubbery morsel in the middle of your palm and started to cry.

“What?” I stilled your shoulders with my hands and trying to get you to look at me.

Your eyes were bright pink. “It was an accident.”

“Hey, it’s ok.” I stared into the center of your open palm and wondered if it really was ok.

We slept that night with the windows open, and I suspect it was because you still wanted to apologize.

Your highs and lows got harder to manage after that. You hauled your body through the day and come night you collapsed on the couch, or the bed, or in the middle of the floor. Just you and your paper plate full of tiny crescent moons. One rogue nail for every translucent heap. Your keratin—bendy bone, our son called it—scattered everywhere.

Jenna Lyles is pursuing her MFA in prose at the University of Alabama. It is there in Tuscaloosa that she teaches English Composition and serves as an associate editor for the Black Warrior Review. Her work appears or is set to appear in Sweet and Calamus Journal. 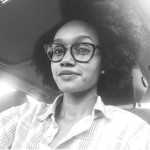