An Interview with Holly Lyn Walrath, Author of ‘Glimmerglass Girl’ 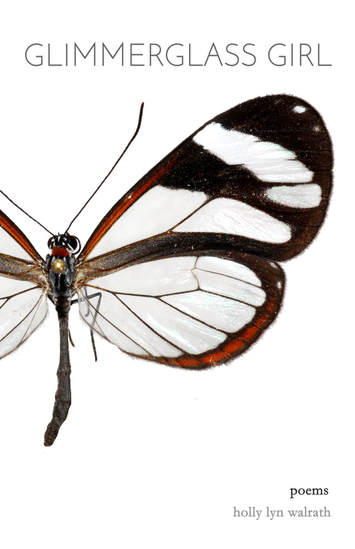 Holly Lyn Walrath is the author of Glimmerglass Girl, which is forthcoming from Finishing Line Press.

Glimmerglass Girl has earned a lot of praise these past few months for its stark contrasts of innocence and nostalgia against themes of modern womanhood and femininity in these troubled times. Can you tell us about this juxtaposition?

While I acknowledge that a lot of this body of poems is drawing from my own experience, I think many women feel at odds with the modern representation of woman as needing to be both strong and also vulnerable. We’re made to be strong female protagonists, but we also need to show weakness in order to be accepted. Even though we are starting to define femininity in new ways, there are still a lot of pressures put on what that term means. The metaphor for this is a poem in my book named after the glass-winged butterfly, called Espejitos in Spanish or “little mirrors.” While this butterfly appears delicate, it’s actually quite toxic to predators and capable of great strength.

Where did you draw inspiration for Glimmerglass Girl?

When I was looking at my body of poems, I realized I’d written a lot of poems about femininity and so I drew from those to piece together the collection. It’s strange because many of the poems are several years old, so in some ways it feels like I was remaking a previous version of myself, maybe to move forward or maybe just in homage.

I think as it pertains to being a woman, we’re always remaking ourselves in a kind of perpetual motion, as you state. We have versions of ourselves for social media, for our parents and family, for the outside world. When are we ever truly ourselves? In some ways, I wish I could retain the qualities of my younger self, who was more willing and flexible, who didn’t care as much what the external world thought. It was an uncanny feeling–like seeing myself through a time-warped looking glass.

I understand that Glimmerglass Girl is also illustrated. How does this inform our reading of your poems? Is there a subtext to the illustrations?

The images in Glimmerglass Girl are all older images in the public domain, many of which are from nature field guides or vintage representations of women. The images are meant to be a bridge for readers to imagine different interpretations of the poems. I love the idea of writers playing around with visual elements, and for this collection I was certainly drawing inspiration from writers like Rupi Kaur who use art and words. I’ve collaborated with artists in the past for ekphrastic projects and so it felt right to me to include images that have historical meaning or else interact with the words in some way.

Let’s switch gears and talk about your writerly life. You’re a very busy writer! You’ve hosted panels, led workshops, and hosted readings, all the while producing a vast body of work across a wide array of publishers. How do you do it? What’s your routine?

It’s really hard for me to find balance, ha. I went several years working in a non-creative field and I think my desire to do everything at once just comes from being obsessed with writing. Writing and the writing community never cease to surprise me. I rely so much on the writers around me who inspire me and give me support, so it’s really hard for me to learn to say “no” once in a while.

My routine changes daily, but on good days when I have the time, I wake up and find myself on my patio, reading or writing, watching the birds on my feeder. Some weeks this doesn’t happen because freelance work gets in the way, or else simply life intervenes. But I’m happiest when I can carve out a little time to write a poem. After that, I can go work on other things with a feeling of completeness to my day.

May we ask… who are some of the writers who inspire you? What about them inspires you?

The work of Ursula K. Le Guin is a constant inspiration–both in her personal life as a champion for free thought but also in her writing, which was so clear and extraordinary. I love the work of spoken word poets like Denice Frohman, whose poem “A Woman’s Place” was adapted for a video that appeared during the Oscars this year. Sofia Samatar’s newest speculative memoir “Monster Portraits,” illustrated by her brother Del Samatar, is another work that gives me hope for my own writing.

What’s your favorite genre to write in? Why?

My first love is poetry. I started writing poetry when I was very young and I go back to it constantly. For me, poetry is a place where I can grapple with the issues in the world and my own emotions. I’ve only recently started pushing my work to a place of experimentation and trying to do new things with my poems like exploring speculative themes. So poetry seems to be changing with me as I age, and I am just here for the ride.

What speculative themes do you find yourself exploring these days? Are there any themes you’ve had on your radar that you’ve wanted to explore (but haven’t yet…)?

I’m interested in women’s bodies as representative of the uncanny, so I’m exploring witches and creatured women a lot these days. I’m interested in the work of marginalized writers that takes a trope or slur and turns it on its head. I’d love to write more poems about space and science, even though I’m not a scientist.

Thank you for taking the time to talk to us! We appreciate it. Where can we pick up a copy of Glimmerglass Girl?
Glimmerglass Girl releases August 3 and is available from Finishing Line Press for pre-order. It will be on Amazon and all the other regular places after release.