A Review of Robert Vaughan’s Microtones
by John Riley

After reading Robert Vaughan’s Microtones over the period of several days, I am still uncovering new facets. As befitting a series of poems that take us through the sometimes gritty and always exasperating story of a family, the perspective is always shifting. The poems thrive on confusion combined with temporary insights that seldom lead to permanent awareness. Vaughan knows that the deepest mysteries are often buried in what at first appear to be moments of revelation.

The mystery starts early. In “When the Time Comes,” the young narrator observes the pleasure his parents take in watching catastrophic events on the evening news over dinner. Already an outsider, he watches as his parents absorb these unsettling images from the outside world. Clearly, there is much to fear out there. “They like the gore,/the strange happenings in the world,” he says. The parents have become so successful at objectifying the danger that when the gore strikes close to home they are able to objectify it as well, to keep the “awful” thing that happened to a six-year-old neighborhood boy safely sealed outside the kitchen door by insisting the boy brought it on himself. We know it is a foolish confidence the parents have allotted themselves and the narrator is growing into the same understanding. In the later poem “Legacy,” death has struck close to home. There is a photo on the piano of a family member, perhaps the narrator’s sister, who has died. But even now, when death has entered the family’s home, its terrible randomness is denied. She had “died on her own, by her own stupidity.” Her death must be sealed from the living just as completely as the earlier death of the neighborhood boy. While “When the Time Comes” death is sealed outside, in “Legacy” the narrator slips the photo into a drawer. 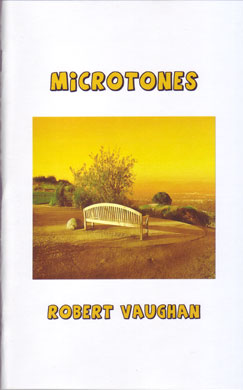 Throughout Microtones, the mysteries of birth and death, in their inexplicable randomness, are developed with a deft hand. Eventually, for the narrator, the ability to see deeper into his own life and those around him leads to a tenuous wisdom. The final poem, “Wrestling with Genetics,” takes place after his father’s death. By now, the narrator has learned that death is not all-powerful. “The sports gene I get from my dead father . . . He’s the tetherball attached to my pole,” he begins. The sexual imagery underscores the continuation of his father’s “genetics.” But he has acquired more than the “sports gene.” He also inherited the tendency to “run the bar tab higher than a kite.” Vaughan personifies the narrator’s struggle with this legacy by staging a fight between the dead father and son over the car keys. In the process we see that death has drawn the father even deeper inside the narrator. He wins this time and wrestles the keys away, but he knows it’s a temporary victory. “And for once, just this time, he won’t barrel down a back road . . .” He is free tonight, but “just this time” reminds us he will continue to wrestle with his father’s heritage.

Microtones acknowledges these flashes of insight earned through experience, but Vaughan is too wise a poet to think that in the end the narrator holds more than a few nuggets of wisdom. The book may close with a temporary victory over his father’s worst traits, but it also warns us those few nuggets of hard earned wisdom could just as easily be gambled away.

[Editor’s note: author Robert Vaughan’s work has appeared in Literary Orphans‘ twice. once this issue with Aretha, and once in the Marilyn issue with The Bagpipe Refrain.]

John Riley’s fiction and poetry has appeared in Fiction Daily, Smokelong Quarterly, Connotation Press, and other places online and in print. He is an assistant fiction editor at Ablemuse.latest Nike release | Nike