a nod is as good as a wink
by James Claffey 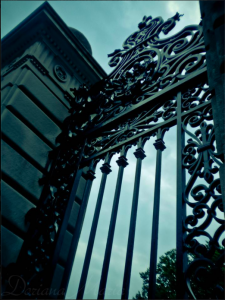 Down there, the filthy blankets and beer bottles, 40-ozs for cider drinkers, liver problems, cirrhosis, the smell of frying bacon, birdsong, even though they’re only pigeons. To die, to die, to die I go, the cobblestone road shining like fish scales in the sun. In school they made me learn the words to “the Lake Isle of Innisfree.” Singsong, merry-go-round. Yeats liked the young girls, he did: pince-nez, peeper, one-eyed giant. Rusting cans of Bachelor’s beans, there’s your two brave men, now. Monkey suits and monocles, dapper feckers. She over there used know the inner workings of fifteen-hundred file cabinets, government ministry, high heel shoes, severe hairstyle. Never know it to look at her now, pink shiny leggings, torn Ugg boots, Guess American flag t-shirt. Inside of her thighs looks like a crudely plucked Christmas turkey, the hole from the barbs wide and oozing. Life and life and o say can you see by the dawn’s early light, before she arrived home with a mother in the John of Gods, paralytic. The apple doesn’t fall far. A nod is as good as a wink to a blind man.

Caught looking at day-old pastries in a trash can behind the coffee house, away with the faeries since the fall from the ladder, paint can, yellow walls, the powdered sugar snow in the sunlight. Hands shaking, week-old underwear sticking to cold skin, oh first communion, and the host in my hands, body of… sticking to roof of mouth, fingers interwoven, holy, holy, holy Lord, God of Hosts. Silence in court, muteness, the house taken away. And the loose change in torn pocket, collected in a rusted can, missing teeth, the way the space holds a hunk of pastry prisoner. House sparrows on the eaves, triangular beaks, like the old Pyramid orange drink from school. Fingers hooked in pants, grin on face, sing a few bars of “Biddy Mulligan, the pride of the Coombe,” before lapsing into fantasy and watching mother spread the table for tea. Go on, move along, now. Does she believe in God that one? Not a Christian bone in her body. Husband mustn’t tickle her apostrophe much. Reach in now. Deep is where the good stuff is hidden.

In the Shelbourne Hotel the diners used need jacket and tie to slurp from the trough. Saw the news today, four dead in train derailment. Soft skulls, must have been a bumpy ride, neighbors’ luggage flying from overhead bins, and the time my own mother packed a suitcase and threatened to leave. “Alive! Alive-Oh!” The top drawer empty, mother’s pretty things gone, and only on the therapist’s couch did the door shut and she came back in to apologize for frightening the wits out of me. In a fog, surrounded by haze, a lonely place for me and my thoughts. Might be able to bore my little finger into the crab-leg and get the meat out. You have a disease, she said, and smiled at me with those eyes. Worked hard, plenty of back pay when I left. Had a cake for goodbye, they did. Hair like fire, her best feature, and I want it back, but what’s under the newspapers there? The old fellow used kick the dog at night, quiet him down, he’d say. maybe I’ll go back to the shelter, take a bed for a few nights. Three stone faces on top of the bank building. Gaping mouths, manes too. Kick the habit, straight-and-narrow.

Spoiled bananas, browner the better to ward of the big C. That chap over there has a face that’d curdle cream. Look at the pale cheeks on him, a real delicate flower. What if I walked over and laughed in his face? Hazard a guess that he’s an accountant. Or an actuary. The color of that tie. Puce. The mother would say the shop assistant saw he came down in the last shower. A good laugh they must have when they sell the unsalable things to the naive. Do they feel guilty? Drops of rain fall, pock-pock-pock the plastic containers. Up umbrellas, pierce the clouds. Might freeze tonight. Sleep under Crossguns Bridge. No bugs in the rotted mattress. Too cold. Ignore me when I try to buy a newspaper. Still like the crossword. Body of Christ, last refuge of sinners. Lost my watch in the shelter. Some shitehawk stole it. Light-fingered. Better off outdoors. Closer to nature. Closer to God. Closer to death.