A Host of Sparrows by Frank Caliri 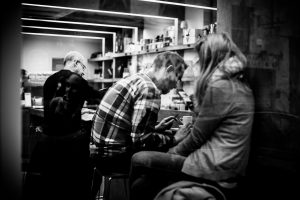 “Tomorrow things will be back the way they were.” His voice echoes throughout the sedan as she leans into his chest, sliding her hand in his. He’s reading the pre-op instructions, a list of directives both drab and amusing: Eat only a light meal six hours before your appointment. Underwear must accommodate a maxi pad. No thongs. Remove genital piercings.

“It was romance that got me into this mess.”

“We’ll go to Hennessy’s tonight and forget about it.”

Why he offers their favorite haunt is beyond him. He can’t decide if it’s nostalgia or if he’s entered some perverse season of self-loathing. He feigns a cough and closes his eyes, hoping the moment passes. But it doesn’t, and he finds himself swimming a tributary of distant memories.

Boston’s Irish flood the streets, hordes flowing through Hennessy’s front door, the smell of chlorine, stale beer, and sweat running amok. Choked by the crowd, he defends his spot with the perseverance of a badger until distracted by a girl who’s killing it on the dance floor. She’s in a full St. Paddy’s getup—shamrock-green shirt, necklace, nail polish, and top hat with black ribbon and gold buckle. He watches her from underneath the bar’s green-painted ceiling. Her rosy cheeks billow as she sings “Brown Eyed Girl” along with the crowd.

Pathetic dance moves guide him to her, his earthy brown crew neck a hazel sandbar in an emerald sea of revelers. He’s been green-adverse ever since a student from the LGBT campus center told him the color clashes with his skin tone. She taunts him for his lack of spirit.

“So sad,” she replies, taking his hand.

His thumbs poke through her belt loops, guiding the two of them along the dance floor, tiny beads of wetness sprouting from their brows. He likes how her weight falls heavy on her hips.

They eat warm Irish nachos while sitting on barstools by the window, cold leaking through the windowpane. He studies the cheddar cheese and sour cream that sticks to her fingers before licking the fat and protein from her knuckles. She pulls away, then offers her hand again, smiling, snickering.

He pumps himself into believing St. Paddy’s Day is for kissing and takes the plunge without asking permission, her mouth dry and taut. She smells of lavender, a scent he registers only after her lips part.

The next morning he’s listing on one side of the bed, watching the girl dial her number into his phone. For months they’re inseparable, sharing thoughts, bodies, toothbrushes. Enduring extended periods of loudness and silence. They burst into laughter at things no one else thinks funny and binge-watch Easy on Netflix, laughing at the absurd imperfections in other people’s relationships. Secrets are shared, plans are made.

With one eyelid half-open, he peeks warily into the morning light, hoping to gaze upon a nature reserve, an arboretium. But he doesn’t. He’s in the city at the corner of Commonweath and Alcorn, where his walls crumble as the cold floodwaters of misery run him through.

He shrugs, and his eyes sour.

He shuts off the sedan’s engine and unlatches the driver’s side door, startled when the cold midmorning wind blows it wide open. He comes around to the passenger door and steers it along its hinges. She draws up to him, resting her head on his shoulder.

“I appreciate you,” she says.

“Appreciate? Love? That’s nuance for ya.”

“You know you’re my numero uno.”She doesn’t want to go inside and asks if he’ll walk her along the parking lot perimeter. A strange awareness settles over him as they arrive at a large brown dumpster full of red plastic bags and cardboard boxes, imagines a gaggle of human flesh cackling from within, stuck to the waste of everyday life. Seems ridiculous, he knows, but the images remain just the same. Then two songbirds sing under a boxwood shrub, and their charm puts him at ease.

Inside, a woman in blue scrubs calls her name. She rises and steps forward while looking back, pale-skinned and nauseated.

“Good luck,” he mouths as she fades down the hallway in her newly styled lilac-gray chop, plump fingers playing with the strands behind her ear.

He sits as a bystander, an escort, away from those who’ve come for pelvic exams, cancer screenings, and pregnancy care. A woman plops a Vanity Fair magazine atop her budding midsection, and her graceful curves peck at the fertile ground of his mind. Maybe he’ll have a family someday, given the right time, the right woman.

Hours pass before she returns, escorted and sedated. He takes the white plastic bag handed to him and nets her around the waist. The two tromp forward, the scent of mild soap wafting from her skin.

“How are you?” he whispers.

She doesn’t say, and her silence lingers.

He understood she went in without presumption, loose thoughts regarding a swift, opaque scraping and cleansing of her insides, and now wonders if the tools of extraction have unsettled her. Or maybe she’s finally come to her senses and will no longer mind-drift when he prods her about their future together. Or perhaps she’s decided to stop dating other men, ill-suited rough-and-tumble who offer her no hope of a future, almost as appalling as her stepfather, whom she was candid about from the beginning.

He knows her love for him is twisted and noncommittal and as real and evasive as truth itself. As far as he knows, he’s the only one she let proofread her #MeToo tweet before standing in solidarity with the other women, and whom she asked to escort her here.

She folds herself low in the front seat while he closes the door and comes around the driver’s side, examining the contents of the white bag—pill bottles, sanitary napkins, post-op literature.

They coast along Commonwealth Avenue through the heart of Brookline, and he offers his hand. She returns it to the gearshift. She’s turned away, and tears mark her shirt.

“You said you wanted this,” he says.

“No one wants this.” Later she adds, “I do appreciate you proposing.”

Sweet? It wasn’t even mine.

The drive along Route 1 morphs into a study of self-reflection, a silent prod into the consequences of decisions made as he tries to make sense of their nearly three-year, on-off whatever it is. Why he alone isn’t good enough for her is beyond him. Last summer, after various incidents of self-sabotage, she acknowledged something wasn’t right. Possibly unresolved anger related to the molestation was holding her back, so she moved out of her parents’ house to make a clean slate of it. But the shenanigans continued—lost her job, overdosed, withdrew from the university.

“You don’t have to stick around,” she says.

He wonders if she means this afternoon or in general. He doesn’t ask. The audacity with which her troubles present themselves astonishes him, and for the first time, he questions his ability to right the ship. He wonders what obligations society has assigned him in this situation.

As they roll in front of her apartment, he unlatches his seatbelt and feels her arm come across his chest.

“Okay. What time should I pick you up?”

He leans into the seat, groping behind it for the white plastic bag. “I’ll call,” he says, thinking he will.

He heads south along Storrow Drive, winding along the bank of the Charles River, the water high and running loose. The sedan speeds forward, toward the university, its speakers flaunting the hammer of rock and roll as dank, fishy air flushes through the vent flaps. The morning wind slackens to a breeze, and his mental fog begins to lift as he watches the platinum river shimmer in the distance, a host of sparrows take flight.

Frank Caliri lives in Dallas, Texas where he is currently working on a collection of short stories. A writing workshop junkie, his most recent fix was satiated at the 2018 Yale Writers’ Workshop. When not writing, you can often find him taking afternoon naps with his dog, Remington Gunn, drool, both human and canine, pooling on the couch. You can connect with Frank on Twitter @FrankCaliri or at frankcaliri.com 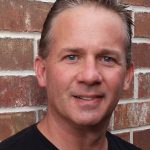