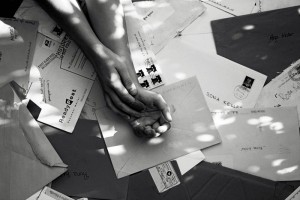 locked out of the world (how many

none of it reaches the bottom

where I sit – the concrete sinks heat,

pulling it into the earth.

Compressed by the building’s weight,

I’m the only one to visit you in jail, to get pulled

up into Tower One and never see a window.

The crackling of the telephone

and the cutting out.  What could constrict

such a short line – your voice still

loud in my head though barely coming through.

We only talk for a short time, half-hour

maybe, about the food and the screams

and the psychotropic straitjacket prisoners pull on themselves –

how one man forgot his meds and robbed a bank,

not his fault.  He’s gentle on his meds.

Being White is real here, not just PC shame –

Man is slain in his Twin Towers cell, you hear.

White leader looking out for you.

We bump fists, bookend the glass with knuckle

and you walk by the guard, slip

into the brick maze of the psychiatric floor.

We don’t talk about the four glass pieces

or the pill-bottle of shake, the knot of resin,

the months of missed community service,

As I’m pulled below the city by the metro,

the prison cold seeping from me,

I wonder how long you’ll claim this history,

how long until you’ll rewrite these months.

Denial is not only an overcoming;

it can be armor,

the power to take pity on yourself, rewrite your mind.

But how long will you remember the sounds

of the prison night, its chill and orange glow?

I shake his hand, and look into his blue, deep-set

eyes, and he is still my brother, but something

has changed.  In his voice, or in his posture,

the old gods of narcotics and self-medication

have been defeated, burned from each synaptic gap

and replaced by the gods of recovery and relinquishing

with an intensity that comes only from knowledge.

Some kind of light lingers behind his eyes –

Everyone in the room can sense it.

Even the ceramic owls on the mantle look on curiously.

He knows it, too.  He has been

blessed, he says, and can’t wait to bless others.

He now lives to spread his faith

in not-himself, and that’s who’s here.

I’m impressed by the ability of language to create

the self, his vernacular forged from 12-step

and his red-letter edition

making a new self, a mind reborn.

Sitting beside him, now,

I think of the rehabilitation house

where he stayed for months, scraping

grease from hundreds of dishes and from his mind, I suppose

and chain-smoking to press order into the world.

Some sequence he could control.

I think of him sleeping in his matchbox room

with three other men, reliving his addiction

until the last years felt

less real.  Soon, even that house will

no longer be real, just some musty dream

had by the city, if cities could dream.

Maybe the unmaking of the terrible is what recovery really is,

a kind of deconstruction of the self made imperfectly.

Sitting beside my brother, I picture all the movement

required to convert the mind, the rearranging of neurons

and the harnessing of their charge, until

they fire in order, one after another, almost without effort.

Cody Deitz resides in Los Angeles where he is a Master’s candidate at California State University, Northridge.  There, he studies poetry and teaches composition. His chapbook Desert Sacrament was a finalist for the Uppercut Chapbook Prize and he has been awarded an Honorable Mention by the Academy of American Poets.   His poetry has been published in various literary journals including Ellipsis, Chaparral, Split Lip Magazine, and others.   He is currently at work on a full-length poetry collection 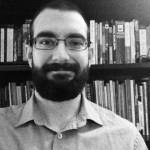