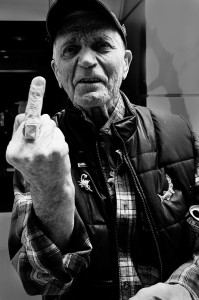 There was no melody mellifluous and majestic as the hornets humming and swarming from the honeycomb in the yard, until Dad stuck his genitals into their nest one morning when we were drinking plastic cups of yellow lemonade with pulp. We were swinging on the truck tire Dad hung from the fattest branch of the tulip tree. He had to climb a ladder to reach the nest. It was his first day home from the turquoise clinic where we collaged the walls with boogers while anemic nurses dished out meds to keep Dad placid, and this hornet incident–as unfortunate and heroic as it was–was nothing worthy of disturbing his freedom.

Mom needn’t know. We wanted the family to stay together without dementia pulling all the punches. Dad swallowed a fist full of Viagra with his lemonade. We could hear him grunting and going at it with the energy of one of those orange clawed creatures fighting for the largest corner in the lobster tank at the grocery store. He went atavistic; turned into a savage. They covered his body and oddly he turned into a perfect spitting image of a lucid beekeeper connecting with the specimens we had grown up with.

Dad never let Mom contract the workers who wanted to murder the wasps; those rugged men with plumber’s crack, who warned us that our summers of cohabitation were numbered. The wasps never bothered us. We feared neither stings nor disturbances during barbecues and drunken debauches jumping through the lawn sprinklers.

In winter, they froze to death, but every spring they would return.

Dad would nap in the afternoon to the drone of hornets. We observed his scrotum and mutilated penis, swollen enormous and purpled, engulfed with hundreds of wasps as he stumbled away from the hive. He somersaulted into the swimming pool and we watched him drift toward the drain and rub himself against the grate. He floated upward.

We did can-openers without taking off our shoes or clothes. We could hear the hornets buzzing above the surface as we swam. They did not sting. There was nothing that needed to be reported. Dad swam butterfly from one end of the pool to the other, the turquoise ripples engulfing his shape, decrepit diving board reflected in his sunburn.

We could see things clearly swimming with Dad naked and engorged. The man he was; the neighbor he shall become; the father he will never be.

Mom swaggered in and grabbed the pipe. She did not knock. She thought we were smoking weed. She tried to hold the meth smoke in her lungs. We encouraged her to exhale. That shit will freeze your lungs with little crystals, someone said. Mom took a huge hit and held it until she started gasping. She whispered to get in the Malibu.

Mom slumped behind the steering wheel. Her fingernails embedded in the cowhide. She tried to stick the key into the dashboard odometer. She could not speak, so I helped her start the ignition. She pulled onto the empty road.

Mom was grinding those yellow incisors. Her hands were shaking. She was sweating. She wrestled the turn signal with one arm as if she were clutching a dick. I was worried she would rip the lever from the vehicle.

She pulled into traffic and veered into the field. You could see the cow pondering the Malibu. Her eyes were watching as we approached. She mooed. She smashed into the windshield and then the hazard signal melody was all we heard; that and Mom’s breathing.

There was no moment to hide. Her skin closed in. The wipers washed away the blood as we waited for Mom to say something, anything.

Who Takes Care of the Nameless One?

Spring breakers with lobster sunburns were pissing into a gutter of ice chunks, steam rising from the melting urine into our eyelashes, when the old man started bleeding. It seemed to be coming from his urethra and the stream grew pink and orange as pissers on both sides targeted the top of the trough where soggy concrete splashed chins. The man was humming Nazi anthems and the bathroom was evacuated with the energy of fireflies falling into the Pacific.

The man finished his business and swaggered toward the sink. Teenagers donning half-empty Corona bottles entered and pontificated at the bloody chunks and puddle dripping down the drain. One of them broke a bottle and the glass cut the old man’s foot, but he did not mind. Bathing suits the shade of blood, the old man handed me a paper towel and slapped my back where the fresh sunburn made it sting.

I drove Dad to the hospital. Doctors diagnosed him with Alzheimer’s. That was not the difficult part–he had an enormous inoperable tumor in his prostate. Dad was given seven months to live. That was eight years ago.

The tumor continued to grow until Dad sliced it from his body. He was in a coma for seven months. He was unable to remove it entirely and they were forced to operate on the mess. Turns out, this act of courage saved Dad’s life. After that, the tumor began to disintegrate and now the only signs of cancer are the constellation of scars and subtle deformities.

We stay away from spring breakers, but there is something about this time of year that keeps Dad pissing blood, and we intend to discover the root cause of this phenomenon. We are renting our house to the degenerates who will debauch themselves amid the sandy labyrinth where Dad trapped us. We will live upstairs, and in return, the spring breakers shall pay nothing. What the fuck could go wrong?

I hawk cheese sandwiches next to the nitrous oxide machine. We grill them and serve them to teenagers. Dad bleeds each day as they bronze themselves in the swimming pool on inflatable rafts. When the month ends, they remain. Dad keeps them around because they make him happy. He can remember all their names and recite them alphabetically, but has no clue about the nameless one who takes care of him.

The bleeding stops. Dad continues to funnel beers, chase them with shots of Don Julio. He sits by the pool with inebriated coeds in the shade of palm fronds. The grill cheese\ and margaritas have made many houseguests gain weight, but Dad never comments. The kids make him youthful, his mind lucid and not focusing on removing things from their proper places.

Spring break lasts beyond Easter and Christmas and many of the kids’ parents have arrived to take them home. Nobody leaves. The adults join the debauchery. Dad adds a couple more names to his repertoire.

I ask Dad if he remembers anything. He calls me Arkansas, and I ask if he recalls that day we went to the hospital when he first got diagnosed. He nods and stirs the ice in his lemonade.

You can see the scars from his surgery when he swims. A gutter of yellow ice melts above the hot tub. The grill cheese is in the air. Dad is emaciated. I can count all his ribs, almost rip them out. Someday Dad will swim deeper than usual–into the drain in the bottom of the pool, his blood red bathing suit will disappear.

The Inertia of Spit Mucus

We needed to cross the river. We were a couple hours into our hike. We smoked thirteen Marlboros so our pace was belabored. The current was swift. We concocted a loogie spitting contest and hocked phlegm at dragonflies. There were submerged boulders that could be jumped. I trailed behind. We were halfway between muddy banks when the hornets attacked. I remember thinking shit, there’s so many. We jumped into the stingers. The swarm blanketed my neck. They clung to our t-shirts. My instinct was to unbuckle the backpack. It splashed and floated downstream. I chased the shoeprints. They screamed and protected their ears. The river went on forever.

On the other side, we pulled stingers from our suntanned bodies. We had sprinted until our lungs burned and hornets were entwined in our clothes. When we were finished tending to our wounds, we realized that the water bottles were in my backpack. The river was polluted. There were urban legends about diseases bestowed upon hunters who drank it. We did not want to encounter those hornets again. Besides, we had a couple bottles in the other backpacks. We would be okay. We just needed to take it easy. We lit four more smokes and shared an orange Gatorade.

We walked and scratched, our welts glowing in the sun. We had lunch in a field of poppies: submarine sandwiches and hot melted blueberries. We had never been this far. There was a rusted twin-engine airplane adjacent to the tulip trees where we would walk into the hills. I sat in the cockpit peeling spider webs from my sweaty face. They were jumping on the roof. Rust and dirt spilt onto my head and down my shirt. Something bit my toe. We ran from the wreck when we saw three turquoise eggs. There were horses and a fence we hurdled in order to chase them. Frank impaled himself on the rusty fencepost. I could see the bloody splinters. It went through his neck and his feet dangled a few feet from the ground until the weight broke Frank and the post from the fence.

Frank coughed and launched a bloody loogie. It would have won the contest–it flew so far across the poppies. There was not much blood escaping from the exit or entry wounds, but it gushed from Frank’s nostrils and the loogies continued unabated. We laid him in the shade of the Tulips and debated what to do. Frank was in shock, his eyes flying saucers. I held him in my arms. We offered water and realized there was not enough to carry him on our shoulders. We did not want to risk dropping him into the river. Jumping would be impossible.

We considered running for help. But there was not enough water for a sprinter. We had to ration the remaining bottles. We rubbed our hornet stings. We offered Frank a hot meatball sandwich but he forgot how to eat. His fingers were filled with splinters from the fencepost. He was peeling the wood with his nails. He lost his sunburn; his face was white.

The thunderstorm washed away the blood, but we did not think to collect rainwater to make a run for help. Frank was lucid and then he would drift away. He would walk into the poppies and mumble to himself. He sprinted, his arms balancing the fencepost.  We chased him. He drifted into the lightning.

Frank was faster than usual, as if he had to stay ahead of us in order to survive. Perhaps he understood something we were not ready to admit. He bounced from rock to rock with the fencepost glimmering beneath a pocket of sunlight. We shouted his name but he never looked back.

We rested to drink, but Frank did not show any signs of slowing. We could see the hornets hovering around his head. Our cramps burned and ached. We scratched our bellies till they bled. My thumb reeked of Marlboros. Surely, everybody would understand our reasoning. We would not be excoriated. Keeping Frank in the same spot was a wise strategy, but now he was gaining ground.

We sat for a smoke as this depiction of Jesus Christ climbed the hill and disappeared into the clouds. Frank would explain everything. There was nothing to worry about. We did the right thing. Our necks swollen with hornet stings, we carried Frank’s backpack, and launched loogies at the trees we would never climb. 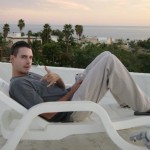