2011: On the Metro to Tahrir by Tamer Sa’id Mostafa

When the church blew to rubble and rebar

we left Alexandria in an enigma because gravity was a renegade,

that if these walls couldn’t stall the exodus

of picture frames braided with wire and d-rings to tile,

what can we ask of cadavers thrashed through craters

My father says it starts with an awakening

his father bringing him to al-Muqattam mountain

to see Cairo’s composite buried like voices under the city’s mosques,

mustered into aftermath. Their legacy is as lasting

as millstones, and the true stories

A man on the aisle tethers prayer beads

between his thumb and forefinger

for each powder blue bead sliding the twine

until tallying all ninety-nine.

He is their hydrangea strumming from an amber jellabiya

his eldered hands into mine

so I can feel him hunger

for the cypress noosed with bull’s-eyes

for his garland swallowed by the river

for the corpse that will sing to generations

Tamer Sa’id Mostafa is an-always proud Stockton, California native whose work has appeared in over twenty various journals and magazines such as Confrontation, Monday Night Lit, andMobius: The Journal of Social Change among others. As an Arab-American Muslim, he reflects on life through spirituality, an evolving commitment to social justice, and the music of Bone Thugs-n-Harmony. 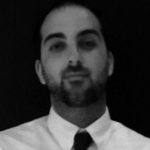