Breakfast in bed would have been ideal were it not for the wad of hair stuck to the fresh strawberries. You accept the nicely arranged tray your boyfriend sets atop the comforter and the kiss he delivers to your forehead as if you’re an ill child in a temporarily borrowed bed. It’s remarkable how many things a solid night’s sleep can transform.

He returns to the other side of the bed and resumes his place under the covers that had doubled as your fortress for the night. After snuggling against your side, he rests his head on the edge of your pillows and assumes the role of eager observer. His bare skin brushing against yours feels intrusive, even though you spent the night curled against it, welcoming its familiar warmth and comfort.

You shift and burrow as deep as your pillows will permit in hopes of postponing the unavoidable. There will be no small talk to distract you from that tainted fruit bowl. You decide it’s safest to begin with the food farthest from those berries. Two perfectly buttered, diagonally sliced pieces of raisin toast sit on a saucer—presented just the way you’ve ordered your favorite breakfast side countless times on your middle-of-the-night breakfast runs.

It doesn’t matter that you refuse to look at the fruit, that you forbid yourself to think about those furry things. As you chew the toast, you imagine bits of that hair getting stuck in your teeth, then rubbing along the side of your tongue as you work to swallow.

The orange juice pulp does nothing to ease your suffering. It clings to your gums and tongue just as unwelcome grains of sand do to wet feet. A glass of water would be perfect, but the only other drink on the tray is a cup of coffee, a steady stream of steam rolling from the rim.

You decide against the coffee. Some things are too sacred.

After eating two toast wedges, you consider how to attack the generous serving of eggs and bacon that occupy the tray’s center. You’re conflicted over whether to continue eating or to draw his attention to this issue in front of you. But you remember, the first person to speak about something ends up losing the battle. So you remain silent.

This isn’t working. How does he not notice the injustice just below his nose? How can he be oblivious to such an obvious thing? There has to be a way out of this.

With no escape in sight, you debate whether to go for the bacon or eggs first. Since your hand with the fork struggles to scoop a bite from the fluffy scrambled mound, you lift a bacon strip to your lips and bite down. A long strand of fat snaps back when you pull away. It dangles against your chin while you agonize over how to extract the bite. Since the stubborn string refuses to separate when tugged, you help it the rest of the way into your mouth.

This is just too much.

You shovel heaping forkfuls of eggs past your quivering lips, shoving whole pieces of bacon in between bites not ready to be swallowed. It’s no use. Your tongue feels like a furry, foreign object no longer fit for your own mouth. You gulp the remaining juice and replace the glass with enthusiasm.

“Aren’t you going to eat the strawberries?” he asks, his amusement about your voracious appetite now visible in your peripheral sight.

“Here.” You slide the tray onto his hip. “I saved them for you.”

He shifts around and pulls the bowl of berries closer. One side of his lip curls down, deforming his affable smile. He dips a finger under the hair clump, then reaches over the bed’s edge and flings his findings to the ground.

Years later, this is how you’ll remember him: his lopsided grin glistening with bright berry juice—the picture of an accomplished assassin. Breakfast, no matter when it’s served, will become a meal you avoid altogether. As for strawberries, you’ll never be able to even look at them again.

He savors the first berry, allowing it to dissolve in his mouth before swallowing. He offers you one, pinching it between the same fingers that moments ago fondled the fur wad.

So here it is—suspended in the air like a deflated party balloon moments before the last of the helium escapes—the answer to everything that exists between you. It hangs in the small space that separates a berry from your pursed lips. A series of juice drips dribble onto the sheet you’re still snuggled together under. Six drops actuate your fall from grace.

You fix your eyes on his, searching for a flicker of anything other than the ignorant disgrace that reflects back. Aside from their obvious disparity, you’re unable to unearth a single salvageable thing.

There’s nothing left to do other than slip away unnoticed, as unnoticed as a tangled mess that forms at the back of a drawer where things are continuously added, yet never sorted through. So you disentangle yourself from this tarnished scene. After dressing and collecting your few belongings, you crack his front door and slip out without glancing back to even shout goodbye.

The moonless night hangs overhead like a secret between lovers. You toss your bag onto the passenger seat and close yourself into the car’s silence. Your movements are automatic as you put the car in drive—your thoughts someplace else.

Pulling away, you feel like those lonely souls who leave their small, familiar towns, not once intending to look back. Like them, you continue traveling farther away until it becomes difficult to see the road ahead in the stilled darkness. Then, glancing in the rearview mirror, you see the scene of the miniature town and wonder how much of it ever really existed. 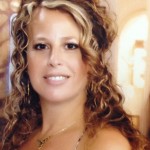