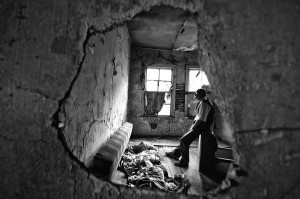 Or at least that’s what he says, your pop, mornings when you find him dawdle walking around the kitchen, dazzle-eyed and tart with the smell of Morgan. I was inside the bottle this time, he’d say. And Mom twists her face, slams their bedroom door.

Pop becomes a different man when he gets inside the bottle. He disappears himself. A little scotch and soda water, he’s a brand new guy. Mom is onto his act though, says it’s not that new. You can see for yourself, she says. God I know I gave you eyes.

The new guy is taller than Pop (You can see for yourself.). He wears cotton tank tops and flexes his arms when he talks. He’s a smoker, too, and hours after he’s left the living room you can still smell the air of him. The way a spent match takes over your coat pocket, some stale thing that settles into the fibers. And look at how he eats, Mom says, pointing with her fork across the table. The new guy chomping pizza. Cheese looping from his mouth, thick and white as spit on a bulldog. He’s a problem, she says, stabbing her plate. A big one.

It used to be Pop worked a dry week and only brought out the new guy on off-days. Sundays mostly. It worked like this: Pop got inside of the bottle and New Guy got out. He used to jump up and down, pumping his fists whenever the Raiders took the over. New Guy yelled at the screen, cursed refs. Fucking Magoos, all of them, he’d say. When they scored, he did a little Juba dance in the living room before spiking the remote, sending broken pieces of plastic everywhere. And Mom would slam their door, then, same as she does now, but gently gently. Soft because she knew, come morning, Pop would be on his hands and knees, picking plastic out the carpet fibers, a white-flag look on his face and eye-owe-you in his mouth. This was when he was still working the Frito-Lay factory at the foot of Grant Avenue. Back then he’d stuff Hefty bags full of potato chips and shoulder the goods like a velvet sack, and you’d get fat on chips till the salt split your tongue. Then all of a sudden he’s laid off and spending more and more time climbing into the bottle, practicing his magic trick. The only chips he shoulders these days are proverbial.

This is what you know: New Guy speaks in quids and pro quos but does not like ultimatums. You know this because he says so. All the time. He says so in church when he skips the wafer line to abuse the Eucharist cup, streaks of burgundy in his beard. He says so at the supermarket, full basket in the check-out line and the card ain’t cutting it. Run it again, New Guy tells the clerk, winking at her like God didn’t give Mom eyes. Third time’s the charm, right? And when Mom drops a stack of bills onto his lap like an anvil, her face all what the fuck? New Guy is out the door without a word—a skinny sweaty man, shadow getting long.

Sometimes Pop defends the new guy. He tries to play at devil’s advocate. Let go and let God, he tells us. I mean, it is what it is, right? And then he goes on about the new guy isn’t so bad, after all; how if you only knew what it was like being a new guy; how difficult it is to catch a break with those wrists of his, thin as they are; to shoulder the world with arms so small. Cut the guy some slack, Pop says. Atlas gotta shrug sometime, right?

New Guy shrugged off another job search today so he could stand in the doorway and pick paint chips off the lintel, drop them onto the kitchen floor. Mom is at the stove, putting matchsticks to the pilot light. Sauntering up, New Guy palms her bathrobe pockets from behind, pulling her into his crotch and holding her there till she squirms free. I’ve got the gas on, Mom says in a voice like she means it this time—a snapped string on a guitar. You want to blow us up? She cocks her arm and throws the box of matches at New Guy, hitting him square in the mouth. And then it’s like everything in the kitchen stops to see what he’s going to do, except he isn’t doing anything but staring at the floor as if he’s counting up the matches. Mom cocks her head like she wants something from him that he doesn’t have.  And now, seeing he doesn’t have it, she walks out the room, leaving New Guy behind. Alone. Standing there like some lone General, surveying land shelled to rubble on his order, and what he surveyed he didn’t like. And for a moment you can see Pop again, a flash in the face, some gathered force quaking in the eyebrows. Behind the eyes, a man tied to a chair, gagged stupid and bleeding. He opens the freezer door, snags a bottle from the icebox—brown liquor, swashbuckler on the label—and brings it to his lips.

Daniel Riddle Rodriguez‘s real name is Daniel Riddle Rodriguez.  He is a full-time student and father from San Lorenzo, California, where he lives with his son.  Previous publications include Juked, Prairie Schooner, Gulf Stream Magazine, Fourteen Hills, and others. Grand Prize Winner of the University of Montana’s 2015 Chapbook Contest, his book Low Village is forthcoming. He is thrilled to be here. 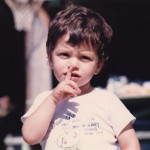