It took a really tall one to see it. The balls are always coming. It’s a benefit the neck is as flexible as a goose debating take-off. Down it goes, chin on chest. Woosh. Balls fly by, just inches above, they graze the premature bald from your head.

They’re “at it” all right. They never stop. You say rabbits, I say nah. You say moisture. I say gay puffy cotton clouds. You say boxer briefs, I say pillbox hats, before Dad dated Joan Collins in that dream where Joan duked it out with Mom.

They would hang upside-down in our garage. Suspended from rafters. He tried to clean all the blood and gore away. But it seeped into the cracks like sewage. On carnival July days it stank. We had to skate outdoors or we’d gag.

Robert Vaughan leads writing roundtables at Redoak Writing. His writing has appeared in hundreds of print and online journals. He is a Pushcart Prize nominee. His story, “Ten Notes to the Guy Studying Jujitsu” was a finalist for the Gertrude Stein Award 2013. His story “The Rooms We Rented” was a finalist for the Gertrude Stein Award 2014. He is senior flash fiction editor at JMWW and Lost in Thought magazines. His chapbooks are Microtones (Cervena Barva) and Diptychs + Triptychs (Deadly Chaps). His first full- length book is Addicts and Basements (Civil Coping Mechanisms, 2014). 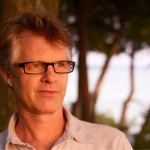