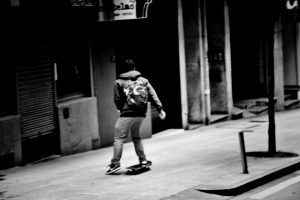 Philip and his mother met Dr. Laila at the international clinic next to the school.  The fact that the clinic was so clean only pointed out how little it had to offer, other than imported medicine and basic tests.   Philip’s father arrived after he was X-rayed and a nurse had wrapped a gauze bandage across his forehead and jaw, which seemed more like a commemoration of his skateboarding accident than a medical treatment.

“You look like you’re ready for Halloween,” remarked Philip’s father, stepping on a cigarette as Philip and his mother walked out of the clinic.  His bushy eyebrows were getting greyer, but Philip’s father still had the same flat stomach and broad shoulders as in the high school photo Philip found in a box marked “Mom’s stuff,” along with her keepsakes from Bangalore and Dhaka.

Over the next few days, the bruise around Philip’s eye spread like an ink stain, his jaw cracked every time he opened it, and although the double vision was starting to diminish, it was almost impossible to do homework.   Five nights after his fall, when his aching eye socket kept Philip awake, he heard his parents talking as he went to the kitchen to get some water from the cooler.

“But you heard Dr. Laila say he shouldn’t fly anywhere until it heals.”

“Why isn’t Laila an actual doctor?”

“Is that really the point here?” fumed Philip’s mother.  “And this is the same doctor who tells women not to sit on the ground because it freezes their ovaries.  Give me a fucking break, Scott.  This is Tashkent.  We’re in the stone age here.”      The kitchen table rattled and a hollow plastic bottle bounced on the floor.  Philip’s father sighed and the refrigerator door opened.

The next morning Philip’s mother told him they would be flying back to the US so that he could see an ophthalmologist in Hershey.    “You get to start summer vacation early,” she said with a thin smile that creased her freckled, suntanned face.  Her eyes looked puffy.   They were leaving in a week.  Philip’s father would stay in Tashkent during the scorching summer, when most in the expat community cleared out, until Philip and his mother returned in August.

The night before Philip and his mother’s early morning departure was the yearly “hot” party at the headmaster’s palatial home, and his parents insisted that Philip go with them. That afternoon, his mother spent twenty minutes turning over cushions in search of her green reading glasses so she could read the recipes for the carrot cake and fruit salad she wanted to bring to the party.  Philip’s father helped chop the fruit.  “Slices, not chunks, Scott,” muttered his mother, clamping the lid on the compost can.

Philip carried the large bowl of fruit over to the headmaster’s home, which was fronted by a large courtyard with topchans covered with brightly colored pillows, a swimming pool, and even a small basketball court.

“Hot,” according to the invitation, was what you made of it.  Some joked that the party was a challenge to see who could still pull off sexy.  One couple showed up as a jalapeño pepper and a thermometer.   Philip’s mother had chosen a straw cowboy hat, halter top, and jean shorts.    His father wore his usual tight t-shirt, slacks and sandals.  He headed right for the designated smoking area where Marlene, the principal’s wife, and a few others joined him.  Philip trailed his mother into the kitchen to put down the fruit and cake.   He went back outside. The expat kids whose parents had failed to find them babysitters sat on one of the topchans eating potato chips and watching YouTube videos.  Philip’s mother now joined scattered groups of embassy employees, NGO workers like her and Philip’s father, and teachers from Philip’s school, daring them to drink the fermented mare’s milk that she had bought at Chorzu bazaar; exactly what she did last year.   Philip knew his mother didn’t actually enjoy the bazaars, she preferred shopping at the brightly lit Korzinka supermarket on Pushkin Street.  Stocked with Russian canned goods and overpriced cheese, Korzinka was the closest thing to a Kroger in all of Tashkent.   In late March during Navruz, the paper and tufts of grass placed among the plastic-wrapped produce reminded her of Easter and the egg scavenger hunts they used to make for Philip together.

By ten, some of the younger kids were already asleep and two of the sportier adults climbed the fruit trees planted in the courtyard, shaking branches and singing off tune while the band set up.  Philip’s father and Marlene sipped glasses of wine together, sitting shoulder to shoulder at the edge of the pool.

Turning his face slightly to the side, Philip said hello to each adult he passed on the way to the kitchen including his English teacher Ms. Patterson who was dressed as a baked potato wrapped in aluminum foil.   As Philip gathered a few handfuls of sour cream and onion chips onto a paper plate, his father walked through the kitchen clutching a DVD, trailed by Marlene and a few of his other expat friends.  He was the unofficial leader of this chosen group, all marching into headmaster’s plush den with the enormous flat screen T.V.  “Hey, Philip,” his father said as he passed by.

These movie parties within parties had become increasingly popular; more for the scotch tasting that followed the viewing than for the dark, edgy films that Philip’s father chose.   The movie for tonight was about a struggling Czech immigrant wrongly accused of murder and sentenced to death. Throughout the movie, the woman escapes into daydreams of soaring, Hollywood-style musical numbers.  Philip found the DVD a few days earlier on their kitchen table at home and watched the first thirty minutes.   The movie seemed to have no point, other than to be strange and reckless, to leave the viewer confused and uncomfortable.

As Philip poured himself some lemonade, Marlene came back into the kitchen.  Her denim shirt knotted at the waist.  The plastic orchid behind her ear had tilted forward.   Marlene asked Philip if he was going to watch the movie too.

“Not your cup of tea, Philip? What kind of movies do you prefer then?” she asked, pulling out a bottle of tonic water from the refrigerator.   Philip didn’t like Marlene’s posh accent; nor did he like the quick, shallow hugs she gave his mother seemingly every time they crossed paths.

“That’s OK, Philip.  You don’t need to explain.”  Marlene placed her hand on his shoulder and gave him a squeeze like he was a soft toy.  She then took a brownie off of a tray on the kitchen counter, smiled at Philip, and headed back into the den, patting him on his chest as she passed by.

Philip walked back outside.   His eyes burned slightly from the chlorine fumes and incense.   The adults were now dancing to the 80s-themed band, made up of a music teacher, the director of the international clinic, and the German ambassador, all of whom wore moppy wigs, Hawaiian shirts, and sunglasses.   When some of the expats, younger and older, began jumping into the pool, Philip glanced at his phone and decided he wouldn’t stay much longer.

As he walked toward the gate, Philip looked back for a moment.  He saw Ms. Patterson sitting on a wicker chair safely away from the splashing, smiling and pulling her hair behind her ears as Principal Morrison picked up a piece of aluminum foil that had fallen from her costume, handing it to her along with a beer.

Philip heard a basketball hit the pavement.   Philip’s mother was shooting drunken airballs with Philip’s twenty-eight-year old basketball coach and his girlfriend.  She slapped the ball with an open palm and attempted a two-handed hook shot that ended up behind some large flowerpots.

Philip pushed quietly through the gate.  He had his house key with him and would rather just go home and try to sleep for a few hours.   Let his mother wait for his father to walk home with her.    Until then, she could dance with her friends or even chat in the open with Marlene if doing so would make her feel better.   And it wouldn’t be a problem if she had, in the end, to walk home alone, even if it were very late.

Poorly sealed, above ground gas pipes gave off a faint rotten egg smell.  Some of the courtyard doors were still open and he heard people inside.  In a few, Philip saw red embers underneath large cooking pots.  Philip emerged onto Shota Rustaveli, the potholed main street with broken crossing lights that runs toward Bobur Park.   Philip walked on the crumbly, uneven sidewalk under a billboard of President Karimov smiling down on a family eating from a table covered with unblemished apricots, almonds, apples, a stack of lepyoshka, and a giant bowl of plov.

Karimov was back home after a trip to Turkey and traffic was now being blocked off for the motorcade.  Police lined the street, including plainclothes SNB officers carrying automatic rifles hidden in what looked like tennis racquet bags.  As the black sedans and police escorts shot by, Philip walked as slowly as the people around him:  carefully, expressionlessly until the trailing Mercedes vans passed and the police radios stopped squawking.

Philip picked up his pace and pictured his parents back at the party: eyeing each other, bickering, and showing off.   The red taillights of the cars now let back onto the street were still fuzzy.   Philip pulled his phone out of his pocket and read a message from his mother:   “Where did you disappear to?  Want to walk back home together? Still need to finish packing!”

As Philip approached the headmaster’s house for the second time tonight, he could just see the inky outlines of tree branches pushing over the high walls of the pitch-dark courtyards.   Up ahead, his mother stood outside the gate under a dull street lamp.  She was wearing her Penn State sweatshirt and holding the cake pan and the big empty bowl from the fruit salad.  The gate opened for a moment and music and laughter splashed out from the courtyard.     Philip’s mother reached forward as someone handed her a forgotten serving spoon, and the door abruptly closed again, darkening the street. Philip walked up to her and took the bowl and pan.  When they got home, they finished packing and, as Philip lined their suitcases up by the door, his mother called a taxi to take them to the airport.

Dan Shiffman is a Secondary English teacher at the International School of Hamburg.  He previously taught in the US, Japan and Uzbekistan.  Dan recently published  College Bound:  The Pursuit of Education in Jewish-American Literature (SUNY Press) and creative nonfiction in The Chariton Review and Hobart. 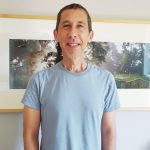