Nobody sees a flower really; it is so small. We haven’t time, and to see takes time – like to have a friend takes time.
-Georgia O’Keeffe, Self-Titled Autobiography, 1976

Georgia O’Keeffe was born in 1887, known for being a prolific artist with a long career (she died in 1986 at age 98). There is a lot to get to know about O’Keeffe that is insultingly sidelined and dismissed. While her telescopic paintings of flowers are legendary and well known, her paintings were varied–skyscrapers of New York (to the right), landscapes and animal bones inspired in her beloved chosen home of New Mexico, surreal paintings such as Ladder to the Moon, her paintings of barns (e.g. 1, 2) inspired by her home state and family roots in Wisconsin, and even her unique sculptures.

What is less known about O’Keeffe, is her tenacity. In 1918, O’Keeffe struggled with a very rough bout of the Spanish Flu–the same pandemic that would go on to kill an estimated 50 million people worldwide, with 675,000 occurring here in the United States (CDC). She left her job (and luckily for her had the privilege and wealth to do so) to quarantine and recover. This image of O’Keeffe (below) was taken during the midst of this pandemic by her future husband and then lover, photographer Alfred Stieglitz–this photo series is a riveting artistic and romantic examination of the personal toll on the body the pandemic inflicted as the two lovers looked down death’s door. 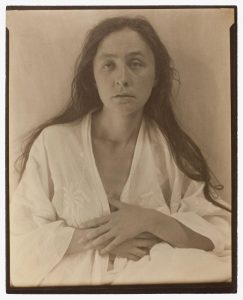 Portrait by Stieglitz in 1918

Friends, we’re going through a tight wind. I wish I could write to you about the sunrise after the night, but my mind keeps getting pulled back to the darkness. In the compiling of this issue–there were several writers who never responded to acceptances or who ceased responding mid-communication. I don’t know if this is due to people retreating and taking care of their psychic energies, prioritizing in a physically and economically dangerous time, or if it’s something more morbid. I don’t know–but I do know that in my time here since our founding in 2012 that has never happened before.

In our night I look back to 1918. I look at the people we almost lost, like O’Keeffe–Louis Armstrong, Edvard Munch, Richard Wright, Raymond Chandler, Franz Kafka, and so many more. I wonder about the names we’ll never know as this pandemic like all pandemics before it devastates the poor and systemically oppressed disproportionately as Where’s Minism? and familiar racism strengthen their hold. While the discussion of WWI’s repercussions on writing, art, economics, sociology, and political theory is endless–the more deadly 1918 pandemic is often shelved. I wonder what the impact the pandemic had on the rise of blues and jazz and postmodernism and surrealism were.

Where I can capture some light, is by looking into people like O’Keeffe and their persistence. I don’t know what it was about O’Keeffe that fed her burning desire to create–but as she lost her vision in the 1970s and went blind, she continued to add to her catalog–resorting to sculptures and the aid of family and apprentices–continuing to create until her body of work numbered over 2,000. I think there’s a lesson there, that to stop creating due to pride in asking for help is selfish. That we are more together than we are alone.