An Interview with The Kernal 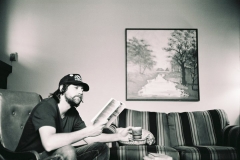 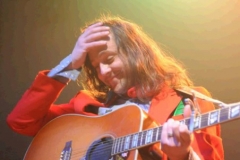 Based out of Jackson, Tennessee (a small town in between Memphis and Nashville), The Kernal is a singer-songwriter who, as he calls it, plays “imaginary country music.” Listening to his debut album, Farewellhello (which comes to you hand-delivered by your postman as a digital download code packaged inside a beer bottle), this is an apt description. Farewellhello has a wonderfully worn-in feel to it; like it was custom built for long drives.

With its Johnny Cash-style rhythm section, the playfully plucky opener “Where We’re Standing” is a great introduction to the record, welcoming the listener in with its beautiful simplicity. But don’t let that simplicity fool you, there’s a confidence here that allows room for each song to breathe, giving way to subtle surprises in each song and at times a real sense of humor. While rooted in the nostalgia of yesterday’s country sound, it also feels incredibly modern. This complexity builds an intriguing tension within each song, which never feels forced. Each subtle movement feels natural, progressing the sound of the album from track to track.

Moody and stark, “Homicide” is a slow build with a haunting melody stretched over a bouncy rhythm giving the song a steady undercurrent, ultimately speaking to the deadly nature of communication: “I know you know / there’s a homicide / every time you speak to me.” “Push Your Button” clicks along like a ringing bell and lyrically shows that The Kernal can weave a narrative through his songs like a Southern-fried Springsteen. The quiet “Lay a New Rag Upon My Head” follows each aching howl with an echo, like you can hear the room it was recorded in. But its on “Good-Bye Flowers” and “Mind Control” that The Kernal seems to be having the most fun. Darkly comical and elevating, even if you’re not one for the dancehall, these tracks will certainly get your foot tapping. The final track “Bull-Dozin’ Dream” reminds the listener that “rambling’s never free.” It’s the perfect send-off for a record that plays out like road music to somewhere and nowhere all at once. Wherever you decide to ramble, Farewellhello would make a good companion.

I recently spoke with The Kernal about Tennessee, songwriting, and the red suit that gives him his powers.

The Fiddleback: A couple years back you released the Mourning Birds EP under your name, Joe Garner. What’s changed since then? How did The Kernal come about?

The Kernal: The Kernal is a result from finding my father’s suit in the attic after he passed away. He played bass on the Grand Ole Opry and wore the suit when he was part of the house band. I’d grown despicably bored with what I was doing musically and decided to put on the suit and see what happened.

The Fiddleback: How did this album come together? Where did you record and how did that process shape the end product?

TK: We recorded the album all over Tennessee to two-inch tape on a mobile recording unit with Jeremiah Nave. The guy is an evil genius. That was a lively, gritty process. We’d find some place that looked rad and we’d figure out a way to get in there and cut for a few days. We recorded in a shed, a lake getaway, a few houses, a few studios in Nashville, another shed, and a garage. We used as our guide-album, Honky-Tonk Heroes by Waylon Jennings, so it’s not a perfect or polished album, but it’s specific to a time and various places where we rambled around together, which makes it a special record to me.

I suppose for a musician there’s a fence between exposure to what’s been done and what you’re going to contribute during your time, and living in Tennessee and around the Opry, I definitely had a belly-full of exposure to country, swing, and bluegrass music, and I’m just trying to learn as much as I can without falling off either side of the fence.

The Fiddleback: What are your favorite tracks from the album?

TK: I was on a Southwest flight one time while an attendant was giving the life preserver talk and she segued into instructions for those with children nearby. Of course, you take care of the children first. But then she said, “If there are A LOT of children around you, start with the smartest and work your way down.” The first one I’d put the preserver on is “Push Your Button” I guess. That one got me through a rough patch.

The Fiddleback: You recently completed production on the video for “Mind Control,” which was funded through a Kickstarter campaign. What was your experience with Kickstarter and how hard is it to get your music out there these days?

TK: I was ecstatic how easily we funded the project. We’d have been unable to pull something like that off without it, not being connected with a label and doing everything independently. As far as getting music out right now, I think it’s as difficult as it’s always been but in a different way than in previous decades. Websites like The Rising Storm show you only a slice of just how many great bands never reached the needle in the 60s and 70s, since distribution was so limited. Now a band can put a record out independently and be on a Best Buy commercial in two weeks, even though a million bands also released a great sounding album the same week. The task of rising to that shimmering surface is the age-old hurdle.

The Fiddleback: I’ve heard you call your style “imaginary country music.” Can you tell me more about what that means?

TK: I was reading about Bela Bartok (with whom I share a birthday), and one of his biographers described his music as “imaginary folk music” based on the way he implemented Hungarian folk music into his work, while somehow creating something all his own. In my mind, The Kernal, by putting on the suit, has put on generations of country music. My pop was raised on a sharecropping farm in Georgia and told stories of his uncle rigging up a radio in the middle of the yard with all sorts of metal dangling off the thing so they all could gather around and listen to The Grand Ole Opry. He knew he was going to be on that radio one day, and he was. I carry the thought of my nine-year-old, dirty-mouthed dad hunkered down listening to The Louvin Brothers when I put on that suit. But it’s all imagined. And plus, I live in 2011—I suppose.

The Fiddleback: How much has living in Tennessee influenced your songwriting?

TK: Some of the license plates here say “Tennessee Sounds Good To Me”—I agree, but I suppose for a musician there’s a fence between exposure to what’s been done and what you’re going to contribute during your time, and living in Tennessee and around the Opry, I definitely had a belly-full of exposure to country, swing, and bluegrass music, and I’m just trying to learn as much as I can without falling off either side of the fence.

The Fiddleback: What artists do you listen to and how do they influence you?

The Fiddleback: Tell me about touring. What’s been your experience? Where’ve you been and where are you going?

TK: Well I probably need a manager. It’s rewarding but also tiresome and wearying handling every aspect of being a band, and booking tours is a huge part of that. That’s a task that takes a lot out of me. Especially on a first record, it’s difficult to even get someone to listen to one song for consideration. We’ve mostly stayed East but have covered a lot of ground from Louisiana to Brooklyn, a lot of midwest traveling, but nothing really past Dallas, Austin, out that way. We’re about to do a run across Tennessee, and up through Indiana. We’re trying to stick to three or four-day tours right now. It’s about the only way to keep from going in the red until we have enough of a backing to really cover some ground.

The Fiddleback: What has the crowd response been to the new songs?

TK: These songs are really meant to be experienced live. It’s not a contemplative, Sunday-afternoon-drive record more than it’s something you go participate in. The reception has been great and we’re getting better as a band too, so hopefully we can keep me momentum going and not let the cart roll back down the hill.

The Fiddleback: Tell me about the title, Farewellhello.

TK: I lifted the name of the album from a Kurt Vonnegut novel called Slapstick. I like him a great deal. It’s based on the fact that when we say “farewell” to something or are forced to say “farewell” to something, we then say “hello” to a new thing. I hand-packaged the album download material inside glass beer bottles that are made to be broken ceremonially in the spirit of something the listener would like to say “Farewell” to. And, once the bottle is broken, I greet them on the inside with a hardy “hello” in the form of the album download. Initially I ran the interactive-packaging idea by my mom and she liked, so we went for it.

The Fiddleback: Your note to me said it best: “Sometimes, throwing something at the ground is the best way to get things done.” I broke my bottle the other day – it was cathartic, to watch something so tangible shatter and reveal something else entirely new. How does it feel to finally have your songs available to so many people? What are the benefits of going digital and not pressing a CD?

TK: Glad you broke it! I wasn’t sure if you were going to pick up on the reference to your poem, “The Teeth,” in that note—I twisted your line:  “Sometimes staring at the ground is the best way to get things done.” Good line. To answer your question, I’m not sure how it feels to have a lot of people spinning my jams because I haven’t gotten the sense that a whole lot of people have heard it. It’d probably be easier to spread around if I didn’t package the album in a mail-only beer bottle, but hey, them’s the breaks. The CD seemed fully obsolete when we were thinking of how to release the album, and I wanted something interactive to go along with the theme of the album so that’s where the bottles came from. No one listens to CDs except for the Baby Boomers, who actually probably will like this record more than people my age. Once again, them’s the breaks.