An Interview with Napoleon 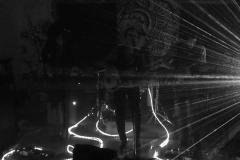 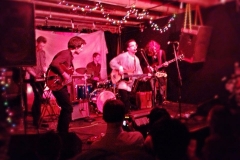 The first time I heard “Sarafan” by Napoleon, was toward the end of summer, right before my senior year of college was set to start. It wasn’t long before I started playing their debut album, Success, on replay. The irony of course being that the song, as well as the album, was recorded in the dead of winter in upstate New York. But I didn’t hear any howling winds or boot crunching snow in between the songs’ silences; just music, music that captured my summer perfectly.

The upcoming Brooklyn-based quartet is not a party band, nor is their music particularly dancey. It’s mellow without being soft; it’s meaningful without being preachy. “Secret Jar,” the last song on the album, questions anxiety and growing older and it ends without resolution and with ambiguity: “But I can’t ask much more, I know what I’m living for/but it grows/and it grows.” The low-fi sound and simple lyrics are at once familiar but innovative so nothing feels recycled. And when Napoleon plays in your room, while the sun shines through half open blinds and you sweat out your own frustrations with the adult world that so many of your uncles keep warning you about, you realize that you’re growing too. And that’s okay.

Hailing three of its members from Detroit, MI, Julian Roosevelt—who plays bass and sings vocals—and Julien O’Neill—guitar—had not met until both of them moved to New York City a few years ago and were introduced by mutual friends. Joining forces with Harrison Keithline on drums and Cory Sterling on guitar, the band is garnering critical acclaim everywhere they go—FUSE TV even named them one of the must see acts of 2012’s CMJ Music Marathon. With nods and influences as diverse as The Rollings Stones and Joy Division, Napoleon is about to hit it big. I met with Julian and Julien last month to discuss the album, the future, and what makes them more than “another Brooklyn band.”

The Fiddleback: You’ve said that Detroit means everything to you; tell me about the city, growing up and what got you interested in music.

Julian Roosevelt: The bands that came out of Detroit are just brilliant. I think—and Julien hates this word—I think you see a lot of edge. I lived in the suburbs of Detroit but my family was different because my father was a musician who also taught to the public school system and he was teaching the real Detroit—right across the street from Motown, Hitsville, USA. It was just an incredible experience and I only wish I’m half the man my father is. I’m very proud of him. We had lawyers, doctors and engineers, but my daddy was just a fucking bass player.

Julien O’Neill: I come from a pretty different background; I was raised all over Michigan and was by a single mom while she was in high school, so my first 12 years were spent in in family housing while she went on to university and got her Masters. And it sort of left a bad taste in my mouth with school, but I thought it was a very honorable upbringing. My first rock show was The Cure when I was still in her belly—I don’t remember it personally but I know it happened.

JR: I made my way out to the Manhattan School of Music. Once I was there, I was so excited, we were at the New York Philharmonic, and we were at the locker room. I remember, it was right before the orchestra gets up on the stage and we’re getting ready for the show and I realized I didn’t want to play classical bass. It wasn’t what I wanted. I thought about having this band and naming it Napoleon—lots of layers—guys come and go but I finally found the guys I have now and we got a drummer and we finally got the band going. This is what I want to do.

The Fiddleback: Since you’re a relatively new band and have had members come and go in the past, how hard do you have to work to maintain your relationships with each other?

JO: We’ve been writing songs for a while, since the two of us met, and we formed the band around June 2011, but we didn’t feel like a band until we found our drummer. We’ve been doing it for about 18-months. I think people really underestimate the family ties that come with this thing. The worst parts of you and the best parts of you come out and it definitely shows when we play live because there’s just this dynamic and it works.

JR: I think it’ll last…I mean, hopefully. It’s cool. We’re like a little gang, just doing our thing. We’re a band, man. We live together so personality counts a lot. When we jam in our basement, we’re happy to work together and that’s what matters. We’re on a roll.

The Fiddleback: What’s the song making process like? How does it evolve from the page to the studio?

JR: I use a typewriter to write. I just got an iPhone but I think it’s the most evil thing to exist! Social media? I hate this fucking thing. But I’d say “Sarafan” is the one I’m most proud of on the record. I said what I needed to say and what I felt at the time and I think I did justice to those feelings. I’m really proud of that one. For a lot of the songs, I am the sole lyricist. I create the foundation and then it sorta gets… I love lyrics but in a non-Britney Spears way. Sometimes it’s so hard to say the easiest things so I make sure I work really hard to say them, like: I love you. So when I’m singing it, I mean them. Now, I hate the word “love” but I want to make it something that isn’t so simple. I want it to be honest.

JO: It’s all about the recording. I’ve written a little bit for the new album, but the end product sounds so different from what we start with because you’ve got all of us contributing and mixing and adding our own thing to the track. It’s almost cocoon like, and the butterfly comes out at the end.

I use a typewriter to write. I just got an iPhone but I think it’s the most evil thing to exist! Social media? I hate this fucking thing.

The Fiddleback: Why name yourselves Napoleon? Do you just have a thing for short Frenchmen?

JO: I came in after the name was in place. I don’t relate it at all to the historical factor. I think it means something wholly different in the music word. When I think of the word, I think it’s a word of power and that’s what I liked about it.

JR: In one way, you’ve got this complex going on, and it is a really sad story. It’s just a cool name! I was watching PBS and it was something about him, one of those historical documentaries.

The Fiddleback: What was your first musical memory?

JO: I’ve thought about this before because I find it so interesting. My favorite song when I was five years old was “She’s Electric” by Oasis. I was five when that record came out and that was a big deal and I remember that cassette tape in my mom’s Corolla. “She’s got one in the oven,” totally sarcastic and dry lyrics but beautiful melody. Also, “Some Girls Are Bigger Than Others” by The Smiths. I had a big association with pop music growing op.

JR: The Cranberries, “Dream.” I was five years old. And as far as the other memories concerned: the Rolling Stones! Late Stones, early Stones, are a huge influence on me, on us, the band. I hate it! I hate that I love them.

The Fiddleback: There is a lot of New Order energy in Success and the sound of the band. Who besides Joy Division and the Rolling Stones are you influenced by?

JO: I’d say T-Rex, a lot of contemporary artists. We really draw our own influences in our own way. We have an underlying funk influence that we don’t talk about too much. Motown is a big deal, like Marvin Gaye, just the soul of that. I’ve always been the musicologist of the band and for everyone else it’s always just been sort of a feeling.

JR: We grew up out of Detroit so we like a lot of funk. I grew up with Blues. But as far as influences it’s about being in and out and being plugged in. It’s little things, being creative and hoping that someone feels something.

The Fiddleback: What was the recording process for Success like?

JO: We recorded the album around January of last year. Kevin McMahon, the producer was someone we knew we wanted to work with. And when we got there, to Marcata, it was very cold in New Paltz in upstate New York. I personally cannot think of the album without feeling my body temperature dropping. McMahon would put the heater on as high as he could, but we played it all live, 14 hours a day for three days. If I would ever go back and do it again, I would do it in the summer.

JR: It was frigid!

The Fiddleback: Kevin McMahon is highly regarded as one of the most innovative producers around and has produced records for Titus Andronicus, Swans, Real Estate, and The Walkmen. What was it like working with him?

JO: He knows what you want as a band but he knows what he wants as well so he’s not going to let you go too far down the road. With us being a young band in the studio, it was our first big jump. His ability to say no to you is a great trait. He’s in it for the final product and his name is on it too. He knows when the flaws work. He’s a teacher, a coach and a mentor. He wants to see you succeed.

The Fiddleback: You’ve said you don’t want to be classified as just another “Brooklyn Band.” What defines a BK band for you?

JO: A lot of Brooklyn bands are riding off the wave of what they were when they first started, like TV on the Radio, with the idea that what you’re doing is important enough that someone is going to catch on and take notice. We’re not the only ones who’ve said that.

JR: It should just be about being real.

The Fiddleback: What’s next for you Napoleon? Are you working on a new album?

JO: What we’ve done so far is we’ve recorded a new single, “Moonlight,” and we’re looking for representation. But I’d like to record an album this year and release it the next, in 2014. We don’t want to take our time. We’re still honing our style and producing something every year, or two years refines it. And our sound has definitely evolved since we started. I don’t think it’s completely there yet but it’s getting there.

JR: You just keep moving cause there’s so many sounds in rock and roll.