An Interview with Andrew Smenos 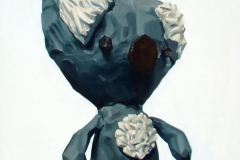 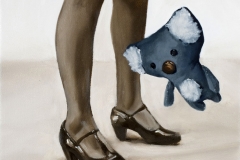 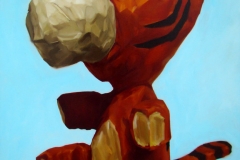 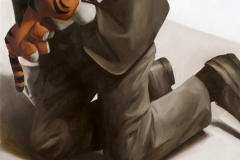 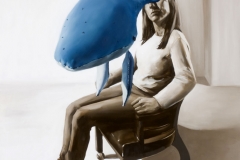 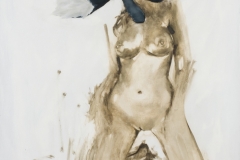 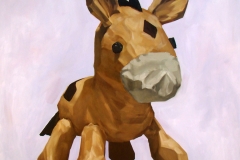 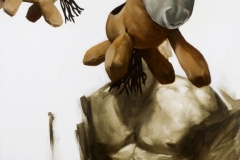 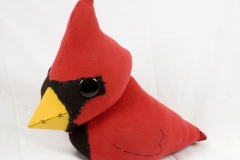 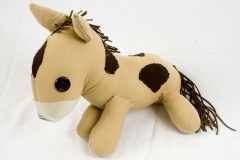 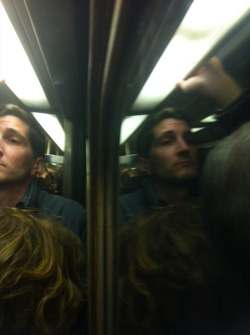 Despite the initial impulse to “awww” at Andrew Smenos’s cast of cuddlies, his body of work urges us to do more than croon baby talk.

Through his sculptures and paintings, Smenos, a Brooklyn based artist, comments on the nature and framework of our childhood images by presenting us with carved, sewn and painted theriomorphic caricatures (aka stuffed animals) that recall a sense of playfulness. Two of his recent collections—Carved Animals and Stuffed Animals and Figures—display Smenos’s mastery with creating luminous, three-dimensional cartoon animals that hover in front of blank canvases or float across monochromatic paintings of human forms. The anthropic sketches, which would otherwise be the central subject in most drawings, challenge our ingrained associations of realism as a dominant mode of portraiture by arbitrarily stamping the human monotypes with characters from his team of stuffed animals. The montage is puzzling, and your brain glitches while trying to make sense of the misplaced cartoons.

Likewise, his fabric and wood carvings tinker with your mental wiring. These pieces look like they belong in a toy store; however, viewing a painted cartoonish carving of a blue whale in an art gallery may cause you to question the very notion of “cute” or ask yourself why we as adults premeditatedly categorize these forms as “kiddie.”

The Fiddleback: Tell us about your childhood. Where were you born and what were you like growing up?

Andrew Smenos: I was born in Chicago. Here is a story that might shed some light on what I was like: I was maybe 10 or 11 and I went to a friend’s house to see if he was around. He wasn’t home, and rather than come back later, my immediate thought was to build a note telling him I had stopped by. I wrote it out in twigs, stones and sticks. It covered half his drive way, and took an hour. It made perfect sense at the time. I was almost finished when they drove up.

The Fiddleback: How did you get into art, and when did you decide to study it?

AS: I can’t remember starting. I do remember being at a big family dinner somewhere as a real little kid. Everyone was talking and eating and getting on; I saw my dad quietly doodle an angel on a napkin. It was really good.

The Fiddleback: When and how did you begin whittling (carving) and sewing?

AS: Recently. The sewing I picked up three years ago, and whittling is about a year old. Although, I have always made stuff with whatever was around. I never really saw any materials as off limits. The wood and fabric work best at the moment.

The Fiddleback: What did you take away most from Ringling College of Art and Design, and what lessons from your formal education do you incorporate into your work?

AS: The most important thing I walked away with was a real deep ingrained need to figure shit out. I understood the mechanics….it was time to take everything apart.

The representational tradition is what I focused on and that seems to be the longest lasting aspect of my formal education.

The Fiddleback: Your work features paintings and sculptures of caricatured animals. The sculptures are carved out of wood and then painted; others are stuffed and made of fabric. What inspired you to create these portrayals of toy animals? How did you gravitate towards using these materials?

AS: The concepts were always about portraying the duality in perspective. We walk through life glass half empty or glass half full. I kind of see it as both at the same time. Things are hard, but if you view it with cynical thoughts you won’t get anywhere. Same goes equally for the good stuff—everything needs to be tempered with the opposite. That was when I started to create my own visual vocabulary. I knew I couldn’t use anything that already existed as a metaphorical reference so I began creating the necessary iconography.

The concept always needed to be reflected with the use of the medium. The stuffed animals were easy because there was a solid enough connection with childhood. Those were a fun and simple way for to me switch gears from the construction of a painting to a dimensional fabric form. The wood came later and was something I had always admired. I knew the stuffed animals worked, but they were always used in juxtaposition against another opposite idea. I wanted to consolidate my metaphors. Wood made the most sense. It was immediate and showed your hand. I liked how much gesture I could create with each mark. Even if I were making a sculpture representing the softest, cutest creature, it would still come out gnarly and primitive.

The Fiddleback: The animal images remind me of the plush toys I cuddled as a child and recall a time of innocence. Why is this theme so popular in your work, and what interests you about this human association?

AS: I once realized that at a certain point life was truly care free, and it will never be that way again. That captured my imagination.

The Fiddleback: How does our view of “cute” morph as we mature? Is your work a commentary on how adults re-appropriate or change their perception of “cuteness” with the passing of time? If so, what occurs during this span that influences such a restructuring?

AS: Adult people tend to be very disconnected from whimsical kid stuff. They tend to shun the stuff that once made so much sense to them…like sinking the stepping-stones that got you so far. The stuff I make is more about finding balance and making peace with the things that got us to where we are now. Also making dark jokes about the strange world we have come to. Hopefully push some buttons while I’m at it.

People often say my work is cute. Some people use it as a pejorative despite the urge to look more. Others [use it as] the deepest compliment knowing the word doesn’t begin to describe their full reaction.

The Fiddleback: Your collection, Stuffed Animals and Figures, features monochromatic oil sketches of human forms obstructed by colored paintings of your recurring cast of stuffed animals. Describe what defines the union and/or separation between the concept of “cute” presented by the animals and impression of maturity portrayed by the sketches.

AS: That decision was based on the fact that I needed a way to have two distinct ideas happen at the same time in a simple way without a story. The figurative sketches are all subtractive painting, literally pulling the paint off the canvas to achieve an image. Then the animal painted directly on top of that sketch using a thick additive method. Two paintings on top of each other: The more “adult” image was painted in a dull brownish rusted green palette to contrast the bright colorful animal.

The Fiddleback: Are these pieces an attempt to shock and/or awaken your audience?

AS: Confrontation is fun. Especially when you have the element of surprise.

The Fiddleback: What is the most common reaction you receive from your work?

AS: People often say my work is cute. Some people use it as a pejorative despite the urge to look more. Others [use it as] the deepest compliment knowing the word doesn’t begin to describe their full reaction.

The Fiddleback: Your work is currently featured as part of the Theriomorphous Entourage exhibition. Talk a little bit about the show. How does your work contribute to the dynamic and overall message of it?
AS: The show was the brain child of Paul D’agostino. He is a great curator and artist. The exhibit was meant to talk to the idea of the boundaries between the savage and the cultivated—instead of an anthropomorphic creature, an animal taking on the features of a human. He wanted to deal with Threriomorphs, humans taking on beastly traits. He was very interested in my work when putting together the show because of the totemic nature of the sculptures and paintings…the parallels and associations between man and beast.

The Fiddleback: What are you currently working on? Will you produce another series staring the stuffed animals, or will you move onto something entirely new?

AS: Larger Sculptural pieces. These animal forms used in ways that will hopefully confound you.