An Interview with Otto Splotch 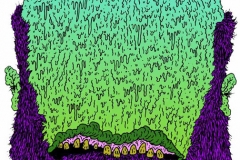 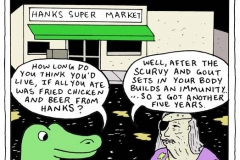 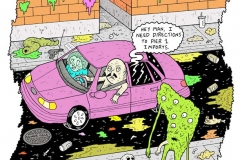 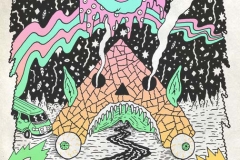 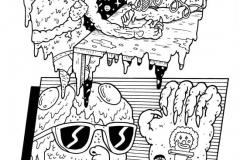 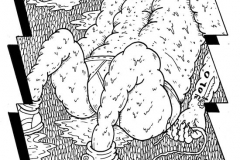 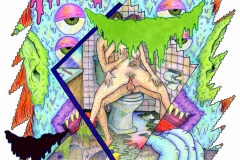 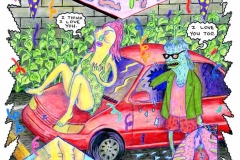 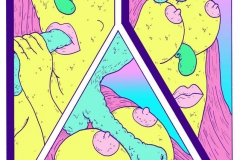 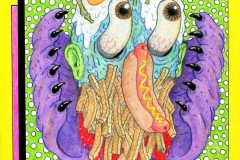 Do a Google search for Otto Splotch and you may stumble across everything from a YouTube video of the artist in a maniacal performance in which he dons little more than a diaper to a myriad of images in which regurgitation, flying eyeballs and dancing poodles are looped in sickening frenzy. His tumblr page alone could read like an epileptic narrative of nausea and schizophrenic exhibitionism. Pages from his most recent work are featured in progress, alongside countless creative exercises in which the web acts as a canvas.

Splotch has skillfully employed social media to fund his most ambitious project to date: his first full length graphic novel, Stink Helmet. The Kickstarter campaign for Stink Helmet, exceeded its funding goals—setting Otto into full time production of an intensely surreal, complex and disgusting publication, which he intends to have completed in time for this year’s Chicago Alternative Comics Expo (CAKE). To meet this deadline, as well as meet the personal goal of publishing his first novel before the age of 30, Otto has only four months to complete the work, which makes this a very exciting and white knuckle period for the Chicago based artist.

However, investors in the project as well as the general internet public—can see the fruits of his labors updated regularly, from which the neon pieces of the graphic fever dream can slowly be digested one contaminated piece at a time. Splotch has the unique position of an artist who is creating a work with a vast public network watching over his shoulder. This is just one of the ways digital media has shaped the climate for the graphic novelist or any artist.

To say that Splotch is just now arriving would be erroneous as any one can see from his back catalogue of comics, illustrations, and live readings that Splotch has paid his dues—self-publishing dozens of unique works influenced by the likes of Basil Wolverton and early David Cronenberg films. But his timing seems impeccably now, and his savvy seems to be paying off. As the world eagerly awaits the birth of Stink Helmet, Otto was gracious enough to entertain some questions about the state of the comic book and living hand-to-mouth as he follows his dream of being a graphic novelist.

The Fiddleback: You have worked as a commercial screen printer in the past. Do you think there’s any overlap between working in the screen shop and what you do in your artwork? Has that experience been valuable to producing comics on your own or in other ways?

Otto Splotch: Yeah, I used to work for a company called Flavor Paper, a hip screen-printed wallpaper company that’s now based in Brooklyn. I started doing a lot of screen-printing on my own and hand printing all of the comic book covers after working there. Also, I think after screen-printing other people’s art all day for two years, I got really tired of it and just wanted to be working on my own work all day instead. When I make art I treat it like any other job. I work at least eight hours a day (almost everyday) and have a lot of deadlines to work with. It’s just hard to explain it to my parents that my job is to make comics and art when I’m barely scraping by financially.

The Fiddleback: You appear to have the greatest interest in underground comics, citing Mat Brinkman as a favorite cartoonist. The experimental approach to storytelling seems to have had a big influence on your style. What other influences could you name outside of comics? What interests you more: style or story?

OS: Real life is my number one influence for making art. I base most of my ideas from stuff that’s happened to me: being hassled by some crack head in front of a corner store, some weird sex experience, living in some gross squat, being drunk 6 days out of the week, etc. I think the difference between me and a lot of other comic nerds is that my lifestyle isn’t as “safe,” so I think that comes out in my work.

The Fiddleback: What’s the most exciting thing about comics right now?

OS: Underground comics are starting to blow up, and it’s becoming recognized as an acceptable art form [and] not just for kids or comic nerds that are into fantasy adventure. There are a lot of comic artists right now that are art school grads (or drop outs) that found an artistic outlet in comics instead of some pretentious art gallery.

The Fiddleback: I’m guessing you’re pretty locked in to producing Stink Helmet at the moment. What’s that process like? What materials are you using? Are you doing anything different given it’s your first big novel?

OS: I did a lot of brain storming of different ideas and then wrote most of the script first and then story boarded the whole thing. When drawing it I use a non-photo blue pencil to sketch everything out and directly ink over. When I scan it in I just delete the blue, which leaves me with clean dark lines. Finally, I do all of the coloring in Photoshop. Most of my stuff has been in black and white, so for this new book it will be in color, which is really different for me. Having it in color is quite an upgrade from my old work. Stink Helmet is gonna look really sick!

Some people need and important job and to have a lot of money. I just want to have made a lot of badass stuff before I die.

The Fiddleback: Your Kickstarter Campaign has been fun to watch. It seems like a lot of work went into that alone, and that it sort of took a life of its own with the video, images, and candid wheelchair G-string photos posted to your tumblr. Do you see any overlap in your interests in performance, animation and the graphic images? Do you create the comics with live readings in mind?

OS: I like working in different mediums. Comics are just one thing that I do that ended up becoming my main focus. I like to make videos when I can, and I’ve done music and performance projects that have nothing to do with comics. When I write comics they’re written with the intent of being performed live, which helps with their over all quality.

The Fiddleback: Would you ever consider doing an animated work? What would that be like?

OS: Yes. I’ve done a little bit of animation. It’s extremely time consuming, but also really gratifying. I was planning on doing more animation after the Stink Helmet project is over. Maybe doing a thing where I have an Internet channel website with animated short movies.

The Fiddleback: One thing that stands out about your style is the crazy format of the frames. The geometric shapes that break up the images are also all over your drawings. Is that something you plan or does it just sort of happen that way?

OS: Yeah, I’m pretty strategic about having nicely arranged frames in my pages. I like how the shapes create a level of abstraction. Also, I think it makes the comics look kind of futuristic.

The Fiddleback: You produced Quarter Vomit while In New Orleans, and even though the world you created there is aggressively surreal, it seems like there’s some left over local color. How much of these comics are taken from your experiences, real life anecdotes, etc.? Has any of that changed since you moved to Chicago?

OS: I started Quarter Vomit because there is so much art coming out of New Orleans and most of it’s bad and says nothing about anything. It’s such a fucked up, surreal city, and I really wanted to point out all of the things that me, my friends, and locals have to deal with. Everything in Quarter Vomit is true. Some jokes might be skewed, but they’re all based off of something very real. If it weren’t true it wouldn’t be funny.

The Fiddleback: What role does technology play in your creative life? It seems like social media is important, but as far as the medium goes, what do you see as the future of the graphic novel?

OS: Well, I did a med study to buy a MacBook Pro last year. Ever since then I’ve been addicted to using the Internet and editing my art with Photoshop. I post almost everything I make on tumblr and Facebook, and it’s really helped promote my work. At this point in time if you’re a comic artist and you don’t promote your art through the Internet, you basically don’t exist. I’m sure that’s upsetting to a lot of people, but it’s true. I don’t think printed media and graphic novels are gonna go away anytime soon, but the Internet plays an important role in acknowledging their existence.

The Fiddleback: What inspires you to create? What keeps you moving on a big project like this?

OS: Two things basically. I have a lot of things I want to say about everything. I have weird ideas, people commentary, things I think are funny or fucked up, and whatever else that’s happening in the world. I kind of suck at articulating myself in social situations, so I try to say it through art, and I want people to know what I’m thinking. Also, I have different goals for personal achievement. Some people need and important job and to have a lot of money. I just want to have made a lot of badass stuff before I die.

The Fiddleback: What’s your favorite material to work with? Is there anything you’d like to try that you haven’t?

OS: I’ve ended up making most of my art on paper, mostly pen and ink, sometimes colored pencil. This is because it’s a very mobile medium. I can just throw it in a backpack and work on it anywhere. I’ve been wanting to do more public murals. I like stuff that a lot of people can see, and doesn’t cost that much money or is free.

The Fiddleback: What advice would you give to someone who aspires to be a cartoonist, graphic novelist or artist?

OS: Just do it. Nothing’s holding you back. It’s one of the cheapest and most accessible mediums to work with. Also, when coming up with ideas, just remember you can do anything you want. If you’re working with too many rules your stuff is gonna become boring and you’ll get stuck making something you might not like.

The Fiddleback: If you had to draw a picture of your muse, what would it look like?

OS: Probably some slimy drippy face with some glitter thrown in it.