An Interview with Elsa Mora 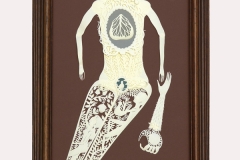 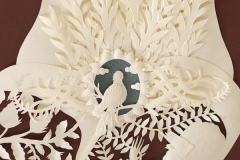 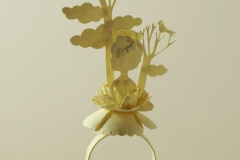 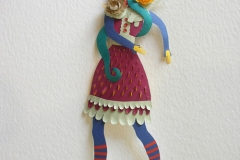 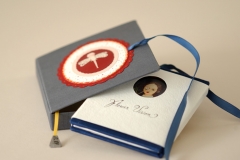 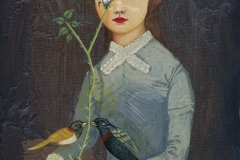 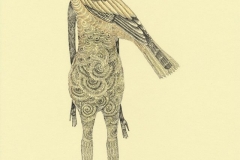 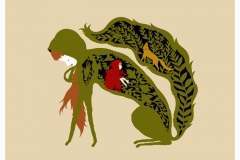 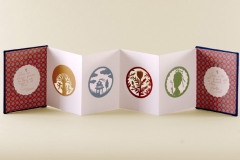 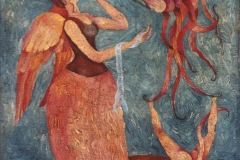 I first discovered Cuban-born artist Elsa Mora’s captivating papercuts on Etsy, and I was immediately captivated by her ability to create art that seemed very personal and self-expressive but also universal. But papercuts are only the beginning—or rather the end—of her body of work, which also includes painting and illustration, miniature art books and mixed media, all of which she documents on her five beautiful blogs.

Besides pouring over her blogs, you can also see her work in a forthcoming book about papercutting and in a show that opens in Los Angeles on April 16. Mora now lives in Los Angeles with her husband, who is a film producer, and their three children.

The Fiddleback: One of the things I admire about your work is the variety: painting, papercuts, book making, dolls, mixed media. What form did you work in first? Which is the most recent?

Elsa Mora: I started up by doing mixed media on canvas or paper. I have always had the urge to use different materials in my work, but a few years ago I became very curious about exploring paper. Papercutting has been my most recent adventure, and I am loving it.

The Fiddleback: How do you decide which tools of expression to pick up on any given day or for any given project?

EM: This happens in a natural and organic way. The tools that I use to express myself as an artists are like the words that I use to communicate through spoken language. It all depends on what I want to say. Some materials are better than others when it comes to expressing a certain idea. Whether I use paint, paper, fabric or any other material, the idea will tell me what material is more appropriate.

The Fiddleback: Despite this variety, you have a very unified style. Which of your life experiences most influenced the work you produce today?

EM: I would say that curiosity is what makes me produce the work I create. I can’t help but feel curious about trying new things, new materials, new ways to represent an idea. Regarding my life experiences, school was the first place that planted the seed of creativity in me. I had great, inspiring teachers who encouraged me to express ideas creatively.

The Fiddleback: I think I am most fascinated by your papercuts—I can’t comprehend the skill and patience involved in each one. How do you approach a particularly intricate piece like The Secret Hand? Do you do sketches, multiple drafts?

EM: I draw the general idea and then cut it out with a sharp knife, little by little—it’s pretty straight-forward. The interesting thing is that papercutting is not as hard as it looks. Some things look hard as a whole, like my paper pieces, because they include many details. But as I work on a piece I never focus on the final result. I just do the cuts slowly, one at a time, and enjoy it as if it was the only cut to do. It’s a matter of being patient. Then, sooner than I imagine, the piece is finished. This is a philosophy that I bring to all the areas of my life: Don’t get overwhelmed by anticipating anything, be right here right now, in the present, that way things will look a lot easier and they will also be more enjoyable.

The Fiddleback: What was the inspiration for that piece?

EM: The Secret Hand was inspired by the idea of developing our full (or secret) potential. I observe that many of us use only a small percentage of our real capacities in life.

The evolution of artistic expression from the most primitive human stages to the present is showing us that rules are dissolving.

The Fiddleback: How long did it take you to make it?
EM: I can’t remember, but maybe about a week or two.

The Fiddleback: I know from your blog that you have a studio right next to your home—how does art comingle with the rest of your life and vice-versa?

EM: My life and art are both connected with each other in a natural way. My studio is one more space in my life, a space for creativity, the same way the kitchen is a place for preparing meals or the bedroom a place to rest. I can’t imagine my life without art or vice versa.

The Fiddleback: Much of your work seems to relate in some way to fairy tales and fables—some immediately recognizable, others personal. How do you explain these elements in your work?

EM: I can’t explain it clearly. But I imagine that it has a lot to do with the important role that childhood played in my life. I had a hard childhood from every point-of-view; I had to grow up so fast (emotionally). Now, as an adult, I tend to re-visit my childhood often as a way to understand better who I am today.

The Fiddleback: Do you draw a distinction between art and crafts? Is there a point when one becomes the other, and does it matter?

EM: As human beings we tend to classify everything. Sometimes is crucial because it helps us understand the world we live in. But when it comes to creativity, I prefer not to draw any lines (unless I do it on a piece of paper). To me, the creative world is a free space where everything is/should be possible and welcome. The evolution of artistic expression from the most primitive human stages to the present is showing us that rules are dissolving. Today art could be craft and craft could be art; in the end they’re both creative expressions, they’re the same thing.

The Fiddleback: How did moving to America influence your work? Did your subject matter change?

EM: The biggest element of change has been having access to the Internet, which I had not in Cuba. The Internet has changed the way I learn things, because I can now search whatever I need to know and learn it quickly. This has expanded my knowledge. I have learned lots of things that come out in my work. The Internet also allowed me to start a blog and communicate with people from all over the world.