In the Shadow of Filmzilla 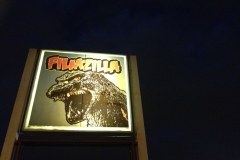 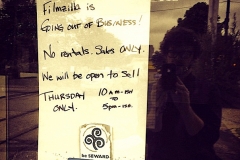 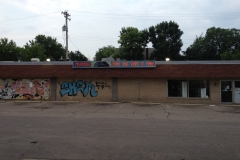 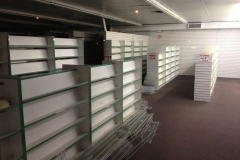 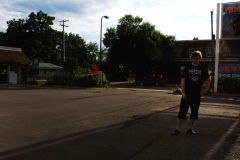 Of all things, my last rentals from Filmzilla were Seasons 1 and 2 of Life’s Too Short. If I’d known that upon returning the DVDs just shy of a week later, I would encounter a vacant storefront with a single handwritten sign reading, Filmzilla is going out of business! No rental—Sales only, I would’ve spent longer deliberating my weekly viewing options.

In shock, I slid the plastic cases into the return slot, as I’d done with countless titles nearly every week for two years. As they clunked into the wooden bin inside, I heard a vast echo spread across the darkened aisles as an overwhelming sense of grief washed over me. I smooshed my nose up to the window hoping to see the familiar faces reorganizing shelves or updating the catalog of Twilight Zone discs, but I just saw a dark room with expanses of empty racks, which once housed nearly 100,000 DVD titles. Overnight, it was gone. Gone were the (sometimes) friendly staff and the massive German shepherds, the back room where the porn was kept, and the regulars I tried to pretend I didn’t see go in and out of that back room every week. Gone was the seemingly endless sense of possibility that this cinephile depended upon as a sole respite from the chaos around him.

To contextualize this trauma, I’ll give you a bit of personal info: I’m a recent graduate from a Masters Program in Fine Art. I’ve recently revisited the “paying your dues” circuit of waiting tables just to make the rent each month on top of a romantic break-up, a fruitless battery of applications submitted jobs for which I am overqualified, and the acquisition of my rental property by a greedy slumlord. Things have been kinda fucked up. It’s often said, “Discontent is a luxury of the privileged,” but in this moment, as I stood outside this derelict building, something broke inside me.

On my brief walk home (less than a block from where the Filmzilla sign still towers as an entry point to the beautiful Seward neighborhood of South Minneapolis), a strange, familiar feeling came over me. I liken it to my sense of betrayal after watching Star Wars, Episodes I-III. Perhaps I’m feeling my adult age or finally shedding my naïve sensibility that there is a place left in the world for Filmzillas. As digital has all but eclipsed analog and Pixar’s replaced Jim Henson, the neighborhood video store has also become obsolete.

This wasn’t the best video store in the world, mind you. I could list a number of problems with their business model—but that’s beside the point. The point is that Filmzilla wasn’t a goddamned vending machine. It had a soul. It lived and breathed: Open ‘til midnight every single day. And even if I didn’t stop in on a given day, I could always count on seeing that Open sign, even in the dead of a Minnesota winter.

Now, I don’t care much for television, and I cancelled my Netflix subscription years ago because I can’t watch films on my computer. (It just feels wrong.) I realize as I write this I sound crotchety to anyone younger than 20. And that’s fine. Fuck it. I’m crotchety, and yeah, I’m bitter about watching the age of the tactile come to an end. But I want more time to hold the object in my hand, to pick it up, feel its weight, examine the text, the design, locate the director’s name, make miraculous connections to other bits of film history—things that are just as important as watching the film in my book. Browsing the shelves of a video store or a record store is really calming and cathartic, and if you’re a real geek, it’s also exciting. How else am I going to spend the next couple of hours forgetting my own mundane existence? At the end of the day, we all want something to drown out the loneliness, the anxiety, to dumb down the pressure of just being alive.

Filmzilla was a holdout; it was to video stores what Godzilla was to society: an ancient, fire-breathing reptile that rose from the ocean either to destroy civilization or protect it.

Our neighborhood had this beacon—a blinking light that signaled those weary of “the instant.” It was a great nostalgic comfort to revisit the days of the VHS, the laserdisc, the Betamax. Stores like Filmzilla take me back to the days when my friends and I would comb the aisles to find something we could rent that would thrill us. Usually it was something rated R or NC-17 (remember that?), something with fountains of blood or an occasional booby. And oh man, if they had the letterbox edition that was a treat. There’s a great bit in Tropic Thunder, where the lone cognizant, Kevin Sandusky (Jay Baruchel), rattles off an unintended soliloquy:

Kirk Lazarus: You talkin’ to me this whole time?

Kevin Sandusky: I was talking to whoever was listening.

This is an exquisitely placed bit of dialogue. It’s a solitary, thoughtful interjection by a naïve geek amidst willful idiots. The characters are self-obsessed, greedy assholes whose lack of integrity somehow makes them more endearing than their efforts to do anything good. The film weighs in on the shallowness of ruthless executives and Hollywood types by creating a flamboyant, expensive blockbuster. The likes of this cinematic reflexivity is nothing new, but this moment calls for pause. It works like an open admission that the studios and distributors have you suckered. The general populace is never going to catch all the onion-like satiric layering in Tropic Thunder, but there are just enough fart jokes and explosions to make it worth owning on Blu-ray to show you’re hip, just as owning a Laserdisc player back in the day established one’s affluence more than it made watching a film at home feel like being at the theater. The cinema is not improving at home or in the theater, but I am talking about films from an art perspective. I’m talking here about the films that need a home—not the Tropic Thunders, but the El Topos, The Forbidden Zones. Never mind that these days you have to be pretty lucky to catch these things in the format they were intended for—film projected on the big screen. Watching something like Apocalypse Now on a computer screen makes about as much sense Ted Turner colorizing Citizen Kane.

Perhaps the saddest thing about Filmzilla’s demise is that it received some of its best press after its closing. A blurb in the Minneapolis rag City Pages eulogized the store just three years after announcing its metamorphosis and relocation from Nicollet Village Video. What the owner had to say didn’t come as much of a shock: Amazon, Netflix, and Redbox made it nearly impossible to make ends meet. (Even Blockbuster has gone the way of the dinosaur, closing several hundred stores per year since 2010 in order to compete with online outlets.) Knowing that, I realized why I had never seen much advertising outside of the bold graphic logo that illuminates Franklin Ave. Sure, it was kind of their thing: They were plain. Inside, the decorations were sparse—inserts from DVD cases slapped up here and there; a signed press portrait of Fancy Ray McCloney. (I didn’t know who this was at the time, but I’d later come to find out he is the best looking man in comedy.)As it turns out, Fancy Ray was like a spokesperson for Filmzilla and appeared in their television ads.

At its heart, Filmzilla was a punk rock operation. If they weren’t screening some bad SciFi Channel movie, they played early Matador records through the sole TV monitor, faintly obscured by the whirrs of the disc cleaners. One dude had the same Motorhead shirt on every time I saw him, which was comforting. Filmzilla was a holdout; it was to video stores what Godzilla was to society: an ancient, fire-breathing reptile that rose from the ocean either to destroy civilization or protect it. It was a mythological beast making its last stand against the faceless throngs scurrying to the nearest Redbox.

Like Godzilla, the staff seemed wary of its clientele and suspicious of those opening accounts. People frequently stopped in to find a title, opened an account, and never came back. During the interview with City Pages, Chris Becker, the store’s owner, said, “We had people who talked about how great we are. The trouble is they loved the concept more than they actually loved coming in.”

As little as I knew about any of the clerks, it was clear they belonged there and believed in what they did. In two years I saw no turnover, and I can’t believe their loyalty had anything to do with the size of their paychecks. Countless times I saw kids come in to ask for applications, which were frequently unavailable because to my knowledge, Filmzilla NEVER hired. It was an exclusive group, which made my weekly presence there feel all the more special. They were like librarians in a DIY corner library. You were expected to follow the rules, to find the movie yourself first instead of bumbling up to the counter and describing the DVD cover. Going in at 11pm was my favorite time because it was quiet, and I could peruse the countless, obscure titles at my own speed. That was my time.

It makes me sad that I never got to know any of them. Our conversations were limited to “Looks like you’ve got some late charges on here,” or once: “How’d you like that Snuff Box?” I said I fucking loved it, and outside of that it was monosyllables and retail formality, frequently without a smile. It was my kind of place, and I miss the Motorhead shirt guy and the two guys who I think, but am not sure, were twins. I miss the steampunk-ish couple and their massive canines and the owner chain-smoking out front. As I’d walk in, he’d say: “You gonna need anything right away?”