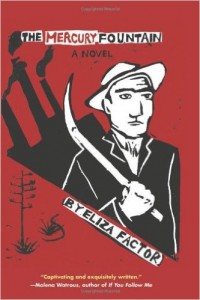 Eliza Factor’s debut novel begins with a scream. “The scream must have come from Casa Grande” is the first piece of information we’re given, other than the year, 1900, which marks the book’s opening section. The screaming voice belongs to Dolores, who is in the midst of giving birth to a daughter. A young boy, Ysidro, overhears the scream and runs off to find the proud father, Owen Scraperton. And here the view broadens to take in the world Factor has created, as Ysidro runs through the Texas border town of Pristina and descends several hundred feet into the earth to find Owen in a mercury mine:

The mine air wrapped around him, a rotten-egg smell of sulfur, made worse by the heat. He had smelled it before, on his father’s clothes, on the winds that swept through town, but never so strong. After a while he could detect whiffs of sweetness mixed into the rottenness, bits of earth amidst the sulfur and piss and sweat and smoke…The shaft grew darker. Hotter…He couldn’t hear anything. No men. None of the swearing or singing or drilling or hauling he’d learned about, no vigorous clamor of noble labor…

Voices remain important throughout The Mercury Fountain. Owen’s persuasive and commanding voice is a constant presence, the thing that holds this community together. Pristina is an improbable place, with its mixed population of Americans and native Mexicans, all guided by a set of Principles written by Owen that promote capital-letter concepts like Nature and Unity. At the same time, it is a mining town, a place of hard labor and, as you might expect, chronic illness caused by mercury poisoning. It is both separate from the world—in the sense that Owen attempts to craft a perfect community operating on the basis of natural laws and the dignity of labor—and inextricably a part of it—in that Pristina is subject to outside events like war, advances in technology, the rise of socialism, and the unstable market for mercury.

As a historical novel, The Mercury Fountain has an intriguing structure, covering a span of twenty years with broad gaps in between sections. Factor often chooses to begin a section in the aftermath of some major event, whether in the life of the community or the life of the characters. At the beginning of one section, Owen and Dolores are estranged. In another, they’re back together, their marriage seemingly repaired. This has the effect of forcing the reader to play catch-up. We must piece together the past based on the evidence of the present. This structure also lends the book a wistful atmosphere, a sense that people live facing backwards, though time invariably carries them in the other direction. The world moves too fast for us. Things happen before we understand how or why they’re happening, and all we can do is live with the consequences. In one of the most poignant examples, Owen arrives too late to save his daughter, Victoria, from having her tongue mutilated by two malicious teenage boys. She survives the attack, but the time it takes her to regain her voice (she must wear a cast for months), as well as the resulting fork in her tongue, create echoes that reverberate throughout the story.

There is a poetic logic here, as there is in much of Factor’s prose. When outside events intrude upon Pristina, they divide both the community and the Scraperton family itself. And once these rifts develop, they seem to have existed all along, fault lines that nobody should have expected to lie dormant. After all, the incredible substance on which Owen sought to found a utopia is a dangerous poison. In this central, tragic irony, might Factor be suggesting that no grand project can exist without a fatal flaw? Does the initial spark of a beautiful idea always contain, also, the seed of its demise? Here it makes sense to return to the novel’s beginning, to the opening scream that sends the boy Ysidro into the mine, searching for Owen Scraperton to give him the happy news of his daughter’s birth.

The smell was even worse now, sourer than it had been up at the top, and hotter. Like terrible breath. His abuela said there were brujas that lived in the mountains, witches that put spells on men and tried to lure them into the caves. He imagined that they’d have breath like this, hot and thick and black. They’d breathe on you and blind you.

Janaka Stucky | The World Will Deny It For You 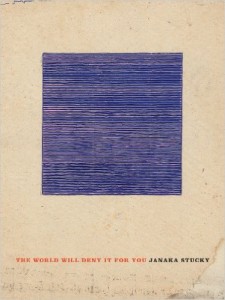 Selected by Cathy Wagner as winner of the 2011 Ahsahta Press Chapbook Award, The World Will Deny It For You brings together twenty-four stark and brooding poems by Janaka Stucky. The opening poem, “Suicide Balm,” is physically set apart from the rest of the collection with the inclusion of a blank page after it. In its entirety, the poem reads:

With its proactive speaker, this poem has a different emotional resonance than the rest of the collection. However, certain qualities overlap–the lipstick seemingly referring to a relationship, either a former or current lover, and the speaker willing to go all in even when it’s self destructive. The rest of the poems largely exist in the desolate landscape of lost or all-consuming love. And while some may think all-consuming love is a good thing, Stucky shows it as a dark, mysterious, and ultimately deadly force.

Throughout the collection, the poems carry a serious tone. Most of the poems come across as if spoken truth, occasionally even taking on a mythological tone of ancient wisdom. There’s a timelessness to the poems that is rarely broken with contemporary images or references–for instance, the mention of “phone lines” in “Each a Threadless Distance From Crow and Lineament” is the only thing that places the poem in a recent era. The poems also embrace mystery, hinting that there is something greater and unknowable out there. In “I Hope To Come To You With Nothing But Light,” the speaker describes, “Mild suffering / Secret invisible wonder” in which “I exhale my doubt and wait.”

Many of the poems contain sexual imagery–tongues, fucking, one person swallowing another or containing another. Even so, there also seems to be an intense loneliness occurring throughout. In “The World Will Be Desolate But Adam of Light Will Shine Forth,” despite having forty-nine children, the “you” of the poem is alone:

And you will tremble

In this way I own nothing
Can lose nothing

The poems are marked by their concise language and serious tone, but occasionally, there is an unevenness to the pieces. For example, in “The Heart Will Be Destroyed To Give Place to the Light Which It Might Have Contained,” the broodiness of the poem is interrupted by the childlike “bOOooOo” of the speaker-ghost. However, most poems successfully maintain a consistent tone. One highlight of the collection, “You Will Know Her Disappearance,” sees the lover leave and transform and leave again. It concludes:

Overall this is a strong collection by an emerging poet who is perhaps better known for his editorial work at Black Ocean. The World Will Deny It For You should help establish Stucky’s own voice as a poet, and it should give readers something to return to and ruminate over while they await the release of his first full-length collection, which hopefully is not too far off.

Gina Myers is the author of A Model Year (Coconut Books, 2009) and several chapbooks, including False Spring (Spooky Girlfriend, 2012). Her second full-length collection of poems, Hold It Down, will be published by Coconut Books in 2013. She lives in Atlanta, GA. 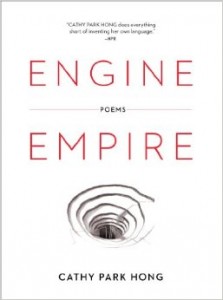 Cathy Park Hong’s Engine Empire is a terrifying study on imperialism in three narrative sections which turn political and lyrical traditions on their heads. The collection offers a novelistic triptych—the Old West, the New East, and a digital future. The three tales are given varied shape and voice, made distinct by their own rules and tricks. In the second and third sections, Hong speaks in direct warning to our ongoing development, and in the opening chapter, she renders the crazed Old West and examines it for the roots of our modernity.

The opening section, “Ballad of Our Jim,” is a rhythmic portrait of a band of outlaws, adventurous and enraged with impersonal hunger. This empire is untamed, the plains are untilled, and “All around us forts lie built and unbuilt.” The tone and diction is Hong’s own, a consonant-rich percussion that she commits to like an old world dialect. In “Man that Scat” internal rhymes and short, delicious lines offer quips like, “Sing my glotten track, / my Sierran Pastern, / I will loot in spades / these tarnishing yarns. / I cant my rambling / jabber like a carnage / starved lobo. / My yipping’s hazard.” The masculine spirit of “Ballad of Our Jim” beats with Yeatsian recollections. With “the prairie grass licking up in a widening, spiraling fire,” we hear “mere anarchy loosed upon the world.” Hong pokes and nudges at our own practiced retellings of this romanticized era. A series of oulipo ballads (Ballad in O, A, I respectively) offer new music to an old tale. The Old West flames out, childish and fragile.

In the triptych’s second fold, “Shangdu, My Artful Boomtown!” we are transported to present-day industrialized China. The verse is suddenly more intuitive, personal, lyrical. We begin to compare the Old West and the New East, their treacherous similarities and their unpredictable disparities. Shangdu is full of personas and character pieces, a mix of fantasy, absurdity, and the hard realisms of industry. In contrast to “Ballad of Our Jim,” the poems in the second section are richer emotionally, literary and pop culture allusions appear with invasive familiarity. We see more hints of the author’s consciousness peering in. The center of “My Artful Shangdu” is “Adventures in Shangdu,” a series of prose poems offering scenes of the city’s varied landscapes.  In “Of the Zoo on 6 Chrysanthemum Road,” we are warned, “Our forests are vast empty chambers. Hike to the deepest heart of our mountains and you hear nothing except for the wind’s hiss of all that has shamed you.”

At the edge of Shangdu, and the lead-in to the final section, Hong nudges us into cataclysm: “Beautiful bicycles, city of broken spokes, a thousand women floated to heaven. / Then I had a most marvelous piece of luck[,] I died.”

In the final turn, the engine turns inward, our consciousness a final, digitized frontier. In the poems of “The World Cloud” we are guided more gently into the author’s entirely imagined landscape. The fictive space gives way to Hong’s own despair, which speaks solemnly through the voices of “The World Cloud’s” imagined occupants. Speech, bodies, love, and consciousness have been occupied with digital growth and rendered useless. In “A Wreath of Hummingbirds,” she writes “I am afraid / I will infect you / after a virus clogs the gift economy: / booming etrade of flintlock guns sag. / Status updates flip from we are all / connected to we are all exiles.” Hong speaks of emerging technology, ubiquitous and alarming, with not a single tinge of glib social commentary.

Engine Empire is full of psychological worry and social anxiety. The transitions of past, present, and future allow for the gradual influx of the speculative: wild, threatening imaginings. The empire is dismantling, and we are left with overwhelming grief for the self. This is a dark, complex, and vital work, sure to stir necessary change in poetry’s evolving space.