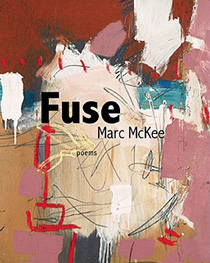 When seasoned poets, especially U.S. poet laureates, are asked about the state of poetry in America, they almost always respond with an overdetermined simplicity that poetry’s doing better than ever, citing vague facts about the number of people writing and the number of journals that exist, etc., etc. I never feel that optimistic about anything, let alone the state of American poetry.

Marc McKee’s FUSE, a full-length follow-up to his 2008 chapbook What Apocalypse? (New Michigan Press), is a brilliant and refreshing exception. Reading McKee’s poems—long, lyrical assemblages shot through with insane amounts of verve and ingenuity—I want to slap those laureates on the back outside a Cracker Barrel, spitting corn muffin remnants from my mouth while praising the might of American verse.

From the opening poem, McKee reminds us we live in a conditional universe paved with question marks: “If I started at the beginning / and told you everything, would you / stick around and would then everything / and would then everything else.” Even when McKee shows our lives spinning out of their tracks, our answer remains, yes. Behind FUSE’s avant-garde maneuvers lies a writer who delivers combinations with real punch and revels in the ability of language, however insufficient and disconnected from reality, to create new possibilities: “Gas pedal, shawl / of blitzy flutter as we drive north again / through the exploded phosphorescence / of Nashville.”

Throughout the book’s four sections, McKee sprints through an American landscape in which everything happens at once. Like crash-test dummies, we’re subjected again and again to folly and carnage only to discover what we already knew: “Daily we are rifled, / even our history of ideas can’t cope.” Speed is as much fun as it is painful, and FUSE traffics in the immediacy of experience—our accumulations and corrupted databanks—but also our experiments and willingness to wake up the next day and do it all again.

McKee’s only weakness is that he’s a poet of excess, but it’s an excess of such heart and charm and anabolic cleverness you soon forgive the spillage. In fact, you want the mess like you want explosions and a bad diagnosis to remind you this living “will not make you eternal.” 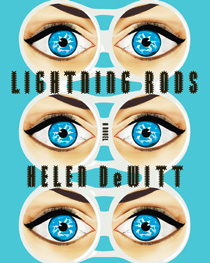 As satire has gained popularity and gone mainstream over the past several decades, it has also lost some of its focus. The term itself is now applied to numerous comedic sub-genres, from the gently mocking spoof to the outright parody to the bitter screed. All these various forms of comedy have become central to our culture, and ironic detachment seems to be the default mood of the times. As a result, satire in the older, Swiftian sense—where the satirist proposes a pointedly absurd idea and then follows that idea to its logical, if ridiculous or horrific, conclusions—has faded.

Helen DeWitt’s Lightning Rods is a satire in the traditional sense, and its publication serves as a reminder of what satire can (and should) do. DeWitt gives us Joe, a salesman so archetypical that he has sold both encyclopedias and vacuum cleaners. But these ventures have been unsuccessful, and we find him, at the beginning of the novel, living in a trailer, spending much of his time thinking through elaborate sex fantasies. And it is here that Joe experiences his eureka moment. He is marveling at the lengths people will go to in order to obtain sex, the risks they will take, and the accompanying shame they are often compelled to feel:

Well, if people are willing to take those kinds of risks you know there’s got to be money in it…Plus, if you could give people a way to get it out of their system they would be a whole lot more productive. They’d be happier about themselves. Because there had to be a lot of guys like himself, guys who didn’t want to be spending the amount of time they were spending thinking about sex, guys who given the chance would rather get it out of their system and concentrate their energies on achieving their goals.

And so Joe finds his entrepreneurial calling as the inventor and proprietor of lightning rods: women working in elite companies who are willing, for an extra stipend, to provide sexual services to men working in the same company.

Much of the material in the book is devoted to Joe’s early difficulties in implementing his modest proposal: finding the right women for the job, pitching his service to interested companies, and modifying the bathroom facilities in his clients’ office buildings to allow for workplace sex that is safe, efficient, and anonymous—in a word, professional. Large swaths of modern life fall under DeWitt’s comic gaze: sex, work, gender relations, and our pious attitudes toward productivity, salesmanship, and sexual propriety. Throughout, Joe’s audacious practicality and his commitment to a particularly American notion of common sense are DeWitt’s best weapons, forcing her readers to examine not just the book’s purported subjects, but our attitudes about them, as well.

DeWitt’s previous novel, The Last Samurai (2000), was a sprawling tour-de-force about a mother and her genius son, incorporating numerous texts, languages, and styles into the narrative fabric. Lightning Rods, by contrast, is much more tightly wrapped, not just shorter but also more unified in focus and narrative voice. As such, it may seem like a bit of a left turn for this extremely gifted writer. But the aesthetic preoccupation of the two novels remains constant: an exploration of how we use language to represent thought, and the ways that language can, in turn, come to guide our thoughts. Joe’s homespun, common sense clichés are not just a verbal tic. He genuinely buys into them. This tendency is amusing when he’s thinking in stale bromides like, “Never marry your mistress” and “We live in a flawed world,” or folksy witticisms like, “As a salesman, he knew that if you go around with your head in the sand, sooner or later someone is going to give you a swift, hard kick in the butt.” But when a lightning rod comes to him in outrage after having been urinated on by an anonymous male coworker, and Joe’s responses include, “Remember, Suzanne, we don’t know the whole story,” and “What he wanted to say was, if you can’t stand the heat stay out of the kitchen,” we begin to glimpse the frightening emptiness at the heart of the enterprise.

For many readers, these insights will be cold compensation for the lack of traditional character development or plot structure. And it’s true that the atmosphere DeWitt evokes often resembles that of an air-conditioned conference room. As a character, Joe has all the humanity of a Men’s Wearhouse blazer with the tags still attached. Some of the minor characters are intriguing, particularly Lucille, the lightning rod who solves many of the obvious problems with Joe’s initial idea, and Ed Wilson, the most enthusiastic early adopter of the new system. But these characters are swiftly shuffled off the stage in favor of new ones that exemplify some new dilemma. The novel’s true main character is the idea itself—it guides the narrative, produces the conflict, and determines how the characters act. As I was reading, I found myself waffling between queasiness at this lack of human emotion and admiration of DeWitt’s unity of purpose. This is certainly not a book that lends itself to hot chocolate and a warm fireplace. Instead, it insists that the wintery landscape of contemporary life doesn’t just exist on the outside. It’s crept inside as well.