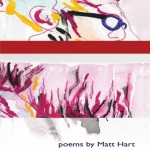 Matt Hart—to borrow a line from The Murder City Devils—has a “preacher’s mouth and a rock n’ roll heart.”

Light-Headed, Hart’s follow-up to Who’s Who Vivid (Slope Editions, 2006) and Wolf Face (H_NGM_N BKS, 2010) is largely a collection of interconnected sonnets organized around longer meditative poems. Like a low-orbit satellite circling the globe every 90 minutes, Hart covers vast territory taking snapshot after snapshot, transmitting data back down to earth about our loneliness, our triumphs, failures and false-starts. His ability to reuse and reclaim his own linguistic somersaults and roll them, tumbleweed-style, throughout the book’s 105 pages leaves you dazed and “bewildered.” Again and again, squirrels get mauled by hawks, the mail piles up, objects combust, and before long the world starts to look like an endless loop of “crash prevention videos.”

The sequencing in Light-Headed may not be new, but Hart packs in such an array of pyrotechnics that you can’t help but feel displaced, as if the “the summer blockbusters kept rolling forever / like fields of candied cotton and no one in the mansion / somebody willing with a ravenous expression / drastic in a suit of over-reaching black holes / […] somebody quick before the quick gets cutting / don’t hit the ground before you fall.” It’s this level of word-play and inventive associations that prove Light-Headed is not simply a sly, hip book (though it is), but something that continues to act on you long after you’re done. Throughout the crashes and debris fields, Hart insists that we shouldn’t ask for truth: “Nobody gets away from anguish. / The question is always / what to do with one’s hands.” 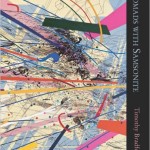 To describe Timothy Bradford’s style and skill is like trying to describe a new Lexus to someone in 1975—there’s a lot of ground to cover. But at the bottom of his work lies a fierce intellect and a microscopic attention to detail, both of which are on full display in his first poetry collection, Nomads with Samsonite. Poems from this stunning debut, like “Anthropology of Love,” a Sestina that repeats words found on a National Geographic spine, dissect their subjects, noting colors, attitudes, shapes, and proximities before recontextualizing them into a new consciousness. The sheer architecture of his work makes you feel dwarfed and thrilled at the same time.

Nomads with Samsonite, is part travelogue, part philosophy survey. Like the best travel and philosophic works, Bradford’s poems dismantle the adages about journeys and destinations, reminding us that we exist in certain time and place—a certain static mode of existence—which is why, “North, south, east, west, it matters not, just that we move.”

Chad Harbach | The Art of Fielding 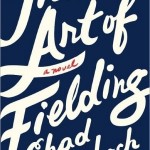 One of the most common baseball truisms is that failure is central to the game’s appeal. Even the best hitters, baseball’s historians and poets will tell you, fail to get a hit in two-thirds of their attempts. They trudge back to the dugout having failed, over and over again, all season long. And the next day, they will return to the field and go through the same motions, day in and day out, for months, years, decades. It’s enough to make one suspect that baseball is not about failure so much as repetition: the same basic set of tasks, some resulting in success, some not, repeated endlessly.

So it is appropriate that Chad Harbach’s debut novel, The Art of Fielding, begins with practice. Our hero, Henry Skrimshander, takes the field after a game to field ground balls. In the stands, Mike Schwartz, starting catcher and team captain of the Westish College Harpooners, recognizes Henry’s natural talents and recruits him to play shortstop at the small Wisconsin school. Schwartz, who is gruff and intimidating beyond his years, takes Henry under his wing, imposing a workout regimen and practice schedule to which Henry adheres religiously. Three years later, he is a star, a major league prospect, poised to break the NCAA record for consecutive error-free games set by his idol, the former St. Louis Cardinals shortstop Aparicio Rodriguez. Rodriguez, whose name will serve as a kind of double allusion for baseball fans, wrote a book that is one of Henry’s prized possessions (and is also titled The Art of Fielding), containing zen musings such as, “The shortstop is a source of stillness at the center of the defense” and “There are three stages: Thoughtless being. Thought. Return to thoughtless being.” For the first seventy-or-so pages, Harbach’s novel has a similar pastoral quality. I sometimes had to remind myself that the novel is set in the present day. Henry’s roommate, Owen, a fellow team member who is also openly gay, was often the vehicle for these reminders.

It’s also true that for the first half of the novel, Henry is probably the least interesting character. For one thing, we don’t know much about him. For another, all he does is work out and play baseball. We do learn a good deal about his surroundings, though, often by way of Guert Affenlight, a Melville scholar and Westish College’s president (who made a name for himself writing about homoeroticism in Melville and begins the novel suffering from a romantic infatuation with Owen) and his daughter, Pella, who, after several years’ estrangement, moves back in with her father and takes a job as a dishwasher at the dining hall. These two characters, along with Owen and Mike Schwartz, provide the book with much of its emotional core in the early going, as well as its narrative impetus. These characters also help broaden the focus of the novel beyond baseball, to include college life in general and the crucial role it serves for so many people in their transition to adulthood. In this way, The Art of Fielding is surprisingly Dickensian. Or, more accurately, Franzenian. Harbach is fascinated by the manners and mores of college life in the Midwest, and the ensemble cast is perfectly suited to elucidate the subject.

But for much of the novel, this leaves Henry as a kind of perfect void around which the rest of the novel’s world revolves. At least, that is, until he makes an error. That first error initiates a bout of crippling self-doubt on Henry’s part, which leads to more errors and a series of events that spur the plot of this ambitious novel. Henry’s failures—and his bewildered anguish over them—turn him into a deeply sympathetic character. Once he’s no longer an instrument of perfection engineered by the affably domineering Schwartz, we begin to see who he is. His character is forming before our eyes.

This struggle to find some kind of meaning in failure is what makes the book richer and more satisfying than one might expect from a baseball novel or a campus novel. Henry must finally face the emptiness of that near-universal American religion: the faith in self-improvement. Harbach characterizes Henry’s particular version of the faith like this: “Every day was like the day before but a little better. You ran the stadium a little faster. You bench-pressed a little more. You hit the ball a little harder in the cage…Hitches, bad habits, useless thoughts—whatever you didn’t need slowly fell away. Whatever was simple and useful remained. You improved little by little till the day it all became perfect and stayed that way. Forever.”

And in this way, Harbach succeeds in allegorizing the game without oversimplifying either his subject or his characters. He focuses less on what happens on the field than on how those events ripple out into the lives and fragile psyches of the characters. If you’re a player, baseball isn’t like life. It is life. And perhaps the daily experience of it—the routine, the repetition, the self-doubt, the labyrinthine workings of consciousness from moment to moment—isn’t so different from the experience of being a dishwasher or a college president. Regardless of a person’s vocation, one still has to reconcile oneself to error and bad luck and loss.

Occasionally, though, magic intrudes. And who could fault Harbach for introducing a little baseball magic into the book? Just look at the 2011 World Series, won in miraculous fashion by Henry’s favorite team, the St. Louis Cardinals. Or look at the coincidences and twists of fate that piled up on the final day of the regular season, which, if they had occurred in a piece of fiction, would be dismissed as implausible to the point of absurdity. Harbach, like his characters, has striven for perfection, but it is the pursuit rather than the achievement that holds our interest. If we catch glimpses of the rivets and bolts holding the whole thing together, so much the better. After all, that is what a novel does (as does baseball, or college, for that matter): assembles the various pieces of ability and experience into something that resembles a coherent whole, but isn’t quite. We’re always falling short, and thank goodness. Perfection is boring. The play’s the thing.