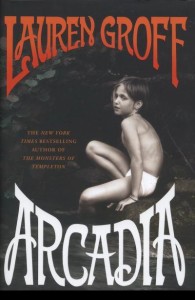 Lauren Groff’s second novel, Arcadia, which tells the story of the rise and fall of a utopian commune, begins as a fairy tale. The book’s central character, Bit Stone, is five years old when the story opens. Even as a young boy, he’s heard the tale of his birth so many times that he visualizes it as his own memory. The story goes: when Bit’s mother Hannah was pregnant, the community was no more than a ragtag collection of groupies touring with a charismatic musician named Handy. Born premature in the back of a Volkswagen Camper, Bit is, in the words of his father, Abe, “our miracle baby,” an emblem of resilience and good fortune whose story serves as one of the community’s origin myths.

A second origin story pierces right to the heart of Arcadia, both the commune and the book itself. When they arrive at their home on a chunk of land in upstate New York—an old estate that features a crumbling mansion worthy of any fairy tale—they find a curious inscription on the lintel: In Arcadia Ego. Handy’s wife, Astrid, begins to explain the roots of this famous phrase, Virgil’s reminder that death exists even in paradise: “But Handy interrupted loudly, No egos in this Arcadia! And they shouted for joy. Astrid muttered, No, not ego, it’s not what that means, it’s…But she trailed off. Nobody heard her but Bit.” So they fix up the mansion and build an impressively large and intricate village—including farmlands, a soy dairy, a motor pool, a midwifery, and more—all while blissfully oblivious to death lurking, literally and metaphorically, above their doorway.

But as the recounting of this incident suggests, Bit remains aware of the spectral presence. Roaming through the mansion in the early days of its renovation, he discovers an old copy of Grimms’ fairy tales. After reading them, he begins to see his surroundings imbued with magical and sinister qualities. When Hannah falls into a deep depression, refusing to get out of bed for weeks, Bit imagines her as Sleeping Beauty, and yearns to be the Prince who can awaken her with a kiss. When a friend’s mother leaves, Bit sees a bird take flight from the friend’s home and knows that it’s the departing woman. Even the ordinary details of his life take on fairy tale proportions—Abe and Hannah are always towering over him, while Bit seems to shrink in their presence. There’s even an old woman who lives in a cottage in the woods, and who serves as a grandmother figure for Bit, who has never known any family other than his parents, never met any people who are not Arcadians.

This, as one might expect, cannot last. But it is in the elegant unfolding of the community’s downfall—and the way each character deals with the resulting sorrow and disillusionment—that Arcadia becomes a deeply moving and resonant work. Groff has divided the novel into four sections, each corresponding to a different stage in Bit’s life. The second section, which takes place during his adolescence, charts the rapid growth of Arcadia and Bit’s infatuation with Helle, Handy and Astrid’s beautiful and troubled daughter. These pages are the book’s most turbulent, and they end with Bit departing Arcadia for the first time, a confused and heartbroken teenager. The third section finds Bit as an adult, a photography professor at a small college in New York City, struggling to raise his daughter, Grete, as a single father. Here, Groff adopts an elegiac tone, as Bit lives in a state of suspended grief, caught in the web his Arcadian childhood has spun. A New Yorker for many years now, he’s witnessed the attacks on the World Trade Center and the global financial crash centered on Wall Street, and he sees a city that “winces and holds itself more closely.” Feeling a keen sense of communal loss, he tries to define exactly what it is that has been lost:

It wasn’t what they believed; it wasn’t real estate or lives. It was the story they had told about themselves from the moment the Dutch had decanted from their ships onto the oyster-strewn island and traded land for guilders: that this place filled with water and wildlife was special, rare, equitable…It isn’t important if the story was ever true. Bit manipulates images: he knows stories don’t need to be factual to be vital. He understands, with a feeling inside him like a wind whipping through a room, that when we lose the stories we have believed about ourselves, we are losing more than stories, we are losing ourselves.

The novel’s final section steps a few years into the near-future, thrusting this child of the sixties two decades into the twenty-first century. A new epidemic is sweeping the world when Bit moves back to Arcadia to care for an ailing Hannah. And though Groff’s attempts to globalize the novel’s scope occasionally fall flat, it is in this homecoming—the newfound closeness of Bit, Grete, and Hannah, and their determination to be a family—that the story comes full circle.

In this way, Arcadia ends as a fairy tale, too—just not the Disney-approved version. Instead, Groff presents the starker vision of the older stories, the folk tales, which are all the more enriching for their characteristic gloom. Those stories never tried to hide death or sorrow, and happiness was never promised in perpetuity. Instead, Arcadia walks the same haunted paths that tales have trod from the beginning, weaving between two stony truths, the only ones that matter: the grim inevitability of death, the unbounded wonder of life.

Caitlin Moran | How To Be a Woman 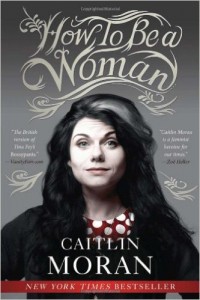 It appears, if one is willing to squint at a certain angle, that feminism is currently experiencing a bit of a renaissance in popular culture. Sitting gleefully between the self-imposed seriousness of Naomi Wolf’s Vagina, and the occasional preposterousness of Hanna Rosin’s The End of Men (both of which graced the front page of the New York Times Book Review) [1] is Caitlin Moran, an award-winning columnist for the London Times and author of the wildly successful memoir-slash-manifesto, How to Be a Woman. After perching atop bestseller lists in Britain for nearly a year, the book landed on U.S. soil this summer to generally breathless, ecstatic reviews. “Ingeniously funny,” insisted Publishers Weekly, while Slate wrote a profile-cum-love letter instead of a review.

And it’s hard to blame these reviewers for waxing so rhapsodically, because, at its best, How to Be a Woman is a tour de force of the most joyful kind. One may, in fact, find it difficult to put the book down, for fear of losing the momentum that Moran seems to effortlessly whip up. Her now globally recognizable patois—a witty, furious, call-‘em-like-I-see-‘em intelligence suitable for the Internet age—deftly handles the most thorny of topics, from porn (“What we need to do is effect a 100 percent increase in the variety of pornography available to us.”), to sexism (“Are the men doing it? Are the men worrying about this as well? Is this taking up the men’s time? Are the men told not to do this, as it’s ‘letting our side down’?”), to weddings (“a viper pit of waste and despair”).

Moran argues both for and against having children (she herself has two), but perhaps the most powerful writing emerges during her chapter on abortion. Freed from jokes and Twitter-ese, [2] she writes with brutal candor about her decision to terminate her third pregnancy. “I can’t have you,” she says sadly to the ultrasound screen. “The world will fall in if I have you.” She takes issue with two narratives imbued in every abortion debate: one, that women have unlimited amounts of nurturing to give; and two, that women automatically feel traumatized after undergoing the procedure, regardless of how pro-choice they are. The abortion itself, as Moran details it, is gruesome, but the guilt she assumes will burden her—“I am braced,” she writes, “chest out, ready”—never arrives. What’s startling and interesting about this is that Moran willingly goes to the center of the bone of her experience, refusing to hide behind intellectualism or statistics. “Feminism is too important to be discussed only by academics,” she asserts in the preface, and by God, she may be right.

In a 2009 CBS survey, 70% of women, when asked without explanation if they would self-identify as feminists, said no. However, when the question was prefaced with the statement, “A feminist is someone who believes in social, political, and economic equality of the sexes,” 65% of the same women agreed that yes, perhaps they were feminists after all. These are the very women—confused, hesitant , resistant to the stigma of “feminism”—whom Moran is chasing after in this book. “Do you have a vagina?” she asks the reader. “Do you want to be in charge of it?” If so, she concludes, “Congratulations! You’re a feminist.” [3]

So maybe Moran’s mass appeal means that certain elements of How to Be a Woman can be forgiven. Her over-reliance on capital letters, say, or the occasional rushed quality of the prose (she wrote the book in five months) can be absolved on the grounds that she has written a feminist manifesto that women and men alike want to read, [4] that has successfully bridged the gap between intellectual and pop culture. That subjects like pay disparities and class divides are eschewed for Lady Gaga and celebrity photographs is intentional, part of Moran’s Broken Windows theory: it only takes one shattered glass to ruin a neighborhood, so why not start small?

What I struggle with, having read How to Be a Woman with great delight, is not whether the book is good (it is very good), but whether it is important. Is it going to change the opinion of those 70% of women who wouldn’t call themselves feminists? Is it a book people will be reading five years from now? Ten years from now? Does it need to be? I can’t help but wonder what Moran would have come up with if she would have let herself sit with the book longer, what might have emerged if she had followed certain thoughts to a conclusion instead of a punch line. One can only hope that after completing both a film and television adaptation of How to Be a Woman, Moran will write a follow-up. Fixing broken windows is all well and good, but there’s still an entire glass ceiling to break.

1. One has to wonder if this cover is in part a tacit apology for the generally excoriated “How-To” issue of the NYTBR, whose cover featured only two women how-to writers out of eight, women who were assigned such weighty beats as “How to Cook a Clam” and “How to Raise Your Kids.” The same day the issue came out, Molly Templeton started a feminist How-To Tumblr in protest of the NYTBR’s regressiveness.↩
2. “Roflment” is used with abandon.↩
3. Later, Moran adds: “What do you think feminism IS, ladies? What part of ‘liberation for women’ is not for you? Is it freedom to vote? The right not to be owned by the man you marry? The campaign for equal pay? ‘Vogue’ by Madonna? Jeans? Did all that good shit GET ON YOUR NERVES? Or were you just DRUNK AT THE TIME OF SURVEY?”↩
4. Unnecessary personal digression: when I was eighteen, and just about to leave for Barnard, I bought a copy of The Feminine Mystique in hopes of preparing myself for the all-girls school. I only got about a quarter of the way through before discarding it, bored, for the chick lit which was very much au courant at the time.↩