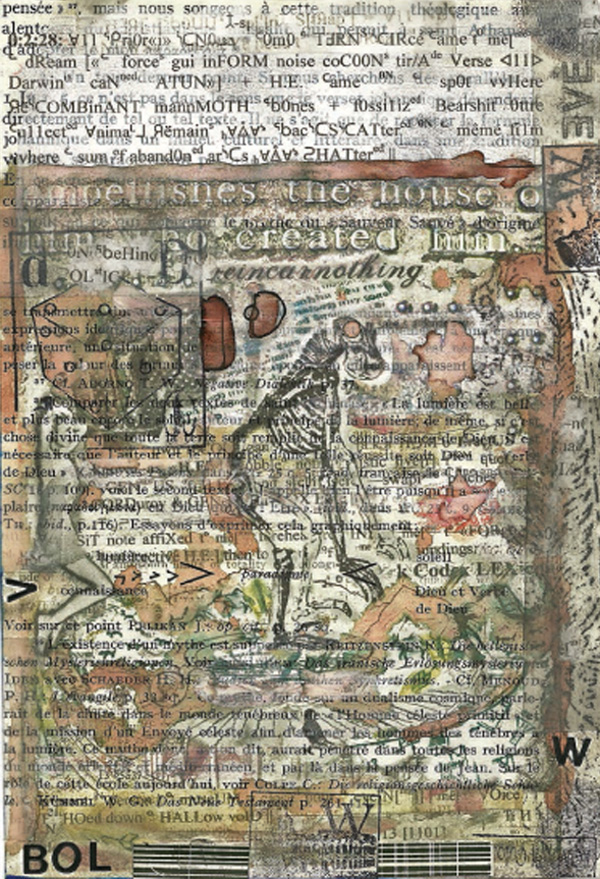 0:2:28: There is no need for police at the pole. No code has been established. All prior i’s embellishing the house of i who create i & i is we. LUCirce comes to us in a dream as tuna canned by Darwin himself. We come on the spot where recombinant mammoth bones & fossilized stare-shit are collected as «REMnant specimens» then re-projected on a screen lashed to the shattered ribs of the prior ark. Call us armchair geologists. The movie moves us in ways we didn’t know we could be moved (in reference to a 2-d inertial frame). 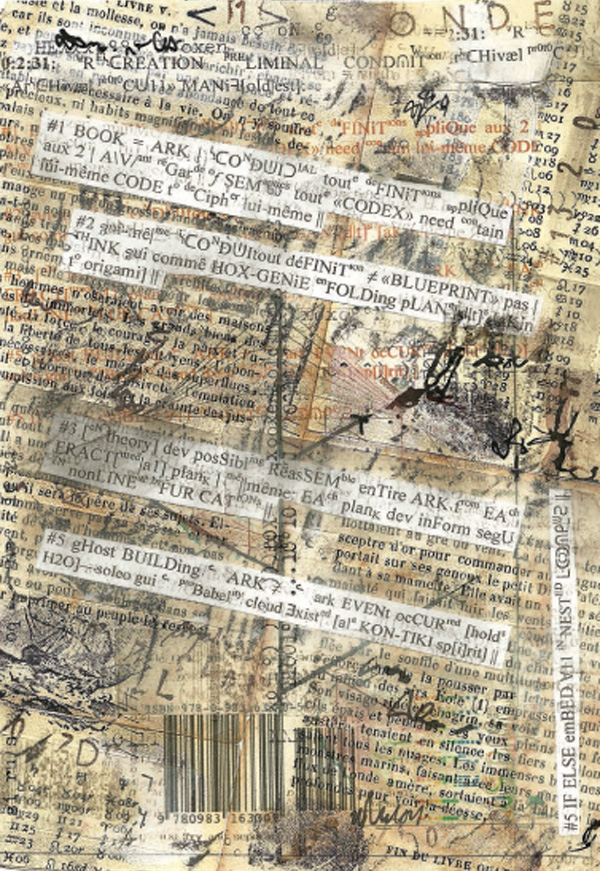 0:2:29: The return of recognizant mammoth is marked by drainage post Z placed at the pole & set to (0, 0). We police ourselves counter to clockwise. The constant law of forcible relocation is all we obey, for now, forever grappling at t = 0. Ticks branch off & attach themselves to our sleeves, but we remain ourselves, puddling & draining simultaneously. The leeway between discrete units of space (time included) or language won’t hold water. The second we articulate new points residing between graphemes they become newsworthy. 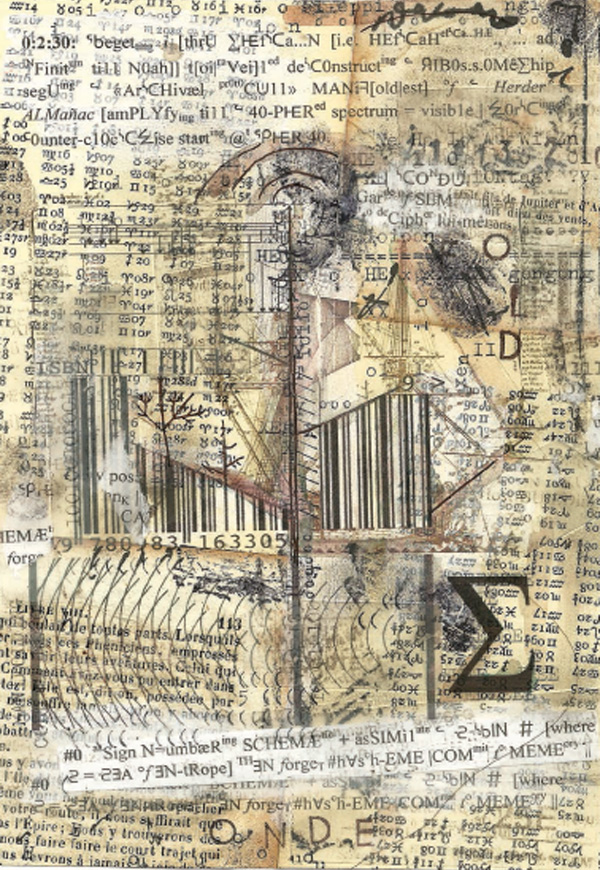  0:2:30: Here’s where we will be relocated to, which is to say we won’t know until after. In the blueprints there’s no difference between aft & bow, port & starboard. S-herd circles π-hole for 40 nights. The marching forms a standing wave pattern on the [d]esigns for a circular ark bridge. The [d]-nodes are denoted by nesting loons. 1st we need to follow the archived «corraling» protocol in the Herder’s Almanac, with sheep assigned to police the imaginary fence. The π -hole coordinates for the ghost post of father mast is committed to the DB. 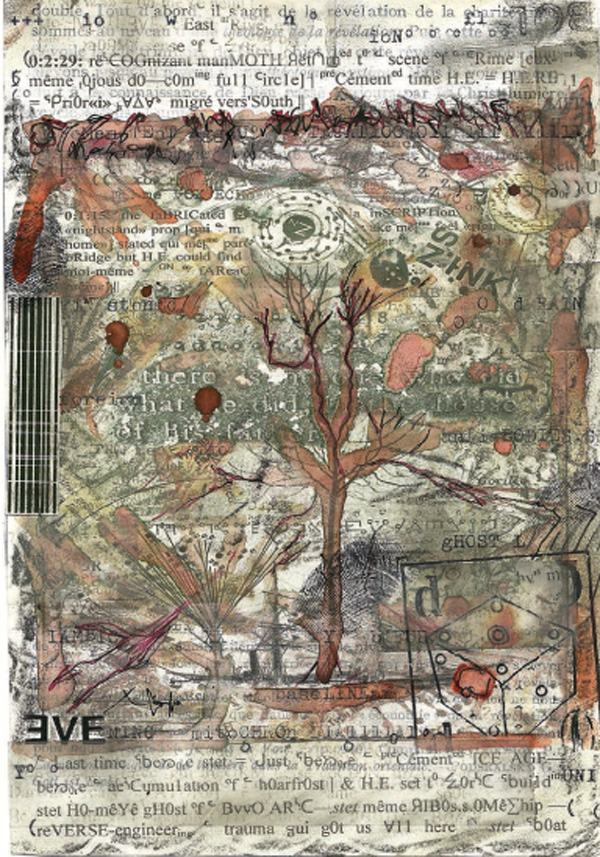  0:2:31: Before the vanity of ever reaching the pole is reached, we assign an arbitrary number S = entropy. The recreation of initial conditions (a.k.a. sex) need be established. We «learn the ropes» & knots necessary for tying our selves to the mast. The rules of culling & restraint need be replicated & archived as manifest. In the interim, we eat those that got us here for reasons of economy. Arcs of light bridge our tongues & teeth & dissipate into Adam’s apple. Those without tongues or teeth are taken to the bridge to fend for themselves.

Ark Codex ±0 speaks for itself—a self-organizing & self-contained archeological archive of language for the sake of language, an artifact collaged of image & text mined from unspecified or unknown origins; deconstructed, replicated, reappropriated, cut up, traced, erased, distressed, deterritorialized, rubbed, stained, repurposed, then reconsituted & expressed in a feedback loop driven by the same chance operations that guide natural selection. To define the meaning or intent of the assemblage that is Ark Codex ±0 would extinguish the very nature it sets out to describe or inscribe (which, in any event, is only an architected articulation of the very ark (vessel, book object, apocalyptic seed bank) that it is).

Not only is the Ark Codex project an affront to the everyday abuses of language for telling stories or writing ‘poetry,’ but it challenges accepted notions of authorship—the vain compulsion to attach a name to an object to ease coping with one’s own mortality. We are all in the same boat & ever in need of a bigger one. It is the readers role to attribute meaning—Ark Codex is merely a rorschach sounding board to project the viewer’s potential, a reader who (like Ark Codex itself) is but a mere embedded fragment of our collective unconsciousness, but in a holographic sense mirrors the whole & takes on a life of its own, becoming a Deleuzian «Body without Organs», a passenger on the ark. If there is an intended audience, Ark Codex is for any conscious being that comes after the fact—after the deluge, the mounting accumulation, the suicidal flood of information that will extinguish us, we living beings that spawned this language to dig its own mass grave in the first place, leaving only the original intent to communicate, to effervesce in the aftermath.

To learn more about the project, read an interview with Calamari Press publisher Derek White here.