An Interview with The Demon Beat 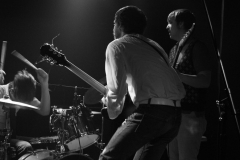 When I took a teaching job in Shepherdstown, West Virginia in 2006, after a three-year hiatus from the Mountain State, all my friends were raving about a local band called The Demon Beat. I assumed this was some little college band that would play a bunch of cover songs and maybe a few original knock-offs, but I went to see them play Stonewall’s Pub, a basement bar beneath a pizza place. All my assumptions were wrong.

What impressed me then was their showmanship. They were three young guys gigging in a corner of a basement pub beneath a pizza place in a small town, but watching them, you’d think you were seeing some bastard blend of The Rolling Stones and The Ramones playing in front of a crowd of thousands. Adam L. Meisterhans (guitar, vocals) plays like he’s in need of exorcism— jumping, falling to the floor, strumming the guitar with his teeth. Tucker Riggleman (bass) and Jordan Hudkins (drums) play their parts with every bit the passion and possession of Meiesterhans while keeping the rhythm going steady. That first night I saw The Demon Beat, their songs impressed me, but mostly I was captivated by their ethos, this cocksure strut that embodied everything about being a rockstar that enthralled me when I was thirteen.

What impresses me most today is their musicianship and their blue-collar work ethic. The Demon Beat have not lost any of the swagger they had six years ago, but they’ve matured as musicians and songwriters with each release. They are among the most hard-working musicians I’ve ever known, releasing three full-length LPs, an EP, and three 7” splits since 2008, with another album on the way. They tour and record constantly, showing how much they love making music and how hard they’re willing to work at it.

In an independent market largely dominated by complicated, obtuse music that relies heavily on technology, there’s something refreshing about a three-piece band recording straightforward garage rock, albeit garage rock heavily indebted to blues and soul. And in an independent scene that privileges androgyny, there’s something refreshing about a band that’s willing to embrace their masculinity without falling into misogyny.

But I don’t mean to simplify their sound or reduce it to buzzwords. Take 1956, their 2010 magnum opus divided into five movements, which was inspired by the tragic circumstances surrounding Carl Perkins, who released “Blue Suede Shoes” in 1956. That same year, Perkins was badly injured in a car accident, while “Blue Suede Shoes” became the first country song to sell a million copies and cross over onto the pop and rhythm & blues charts. As Perkins recuperated, he watched Elvis Presley’s cover version become more popular than his original. The Demon Beat use this story as inspiration for an album about the inescapability of change.

Pretty heady stuff for a little garage band from a small town in West Virginia. But The Demon Beat has always been more than that. They have always been larger than their circumstances. Go to one of their shows, and you’ll know exactly what I mean.

I recently spoke with Adam L. Meisterhans about all things Demon Beat.

The Fiddleback: What is your writing process like? How do you guys go about writing a song?

Adam Meisterhans: The process is varied. We have written songs several ways. Sometimes we just hit record and see what happens. Sometimes I demo a song with every part written and hand it to the other dudes and they add or subtract whatever they feel works best. More often than not, someone brings an idea to the table, and we fill in whatever is missing by riffing off of each other and then we arrange together to make it what we want it to be. Then I write words. We’ve gotten into a really comfortable rhythm of working off of each other and making things that the three of us are proud of and enjoy listening to.

The Fiddleback: How would you say your sound has grown over the years? How has that sound evolved from The Demon Beat EP (2008) to Bullshit Walks (2011)?

AM: I think that we’ve become more confident and we know what we’re good at and what’s out of our reach at this point. We’ve all grown individually as musicians, and more importantly we’ve learned how to write a song and when to keep going and when to stop. I trust Tucker and Jordan fully, and there’s a healthy abandon and dependability in our process. I think we’re more potent now. Before I think we had good ideas and good sounds, but now I feel that we’re exploiting our strengths to obtain the sound and effect that we’re going for.  It feels more powerful now.

There’s always a healthy undercurrent of people championing the craft of songwriting, recording, and performing music that has some validity and merit. It just happens to be that that doesn’t make for good primetime television.

The Fiddleback: What inspired 1956? How was writing and recording a concept album like that different from other albums?

AM: I had some ideas laying around, and we were in the midst of tracking Bullshit Walks (BW was recorded on a Thursday and Friday session and 1956 was recorded the following Monday and Tuesday), and I felt like with a few slight changes we could use some of the leftover ideas and they might all fit together. I spent Sunday messing around with piecing the ideas together and then we worked on “Movement 1” and “Movement 2” on Monday and tracked them. Then we worked on “Movements 3-5” on Tuesday and tracked them.

The lyrics and “concept” came later. I had some melodies written, but the idea to make it about Carl Perkins came later and I just made all the words about that. I also tried to make it so the songs could stand alone without needing the whole record to make it work, but still fit into a coherent whole. It was different in that we did it all live, whereas the last couple of “studio” LPs were done with overdubs.

The Fiddleback: Talk influence: What bands and artists would you say have had the biggest influence on your songwriting?

AM: We’re into a lot of music. It takes up the majority of our time. We like the roots of the “independent” music scene. Most of the bands from the book Our Band Could Be Your Life: Minutemen, Dinosaur Jr., Mudhoney, The Replacements, etc. We also grew up on some classic jams: The Beatles, Rolling Stones, The Who, Hendrix.

The Fiddleback: Along those lines, who are some bands and artists you’re listening to right now?

AM: I’m personally on a big Jay-Z kick right now. We’re collectively amped about the new JEFF the Brotherhood album, Hypnotic Nights; the new Ty Segall Band LP, Slaughterhouse; and the new Pujol joint, United States of Being. We’re about to play with a cool band called Sleeping Bag that had a great self-titled record that came out last year.

The Fiddleback: On the flip side, anything out there now that you can’t stand?

AM: I don’t spend that much time paying attention to stuff I can’t stand, I suppose. There are certainly trends that I would prefer to stay away from, but I’m usually too pumped about what I’m into to give much attention to shit I hate. A fair amount of radio stuff is annoying, but it’s just business. If someone is there to buy it, it will continue to happen.

I do feel that some of the glorified talent shows on television these days probably do more harm than good. Seems like instead of uncovering hidden talent, it just makes people focus on karaoke aspects of music rather than learning the craft that goes along with writing and performing. I wish that wasn’t going on, but that’s just the status quo. There’s always a healthy undercurrent of people championing the craft of songwriting, recording, and performing music that has some validity and merit. It just happens to be that that doesn’t make for good primetime television.

The Fiddleback: How has the region and culture of West Virginia influenced your music?

AM: I would say that being from West Virginia has left an indelible impact on our style, the way we play, and our work ethic. There’s a kind of vacuum quality to West Virginia and it makes you seek out other people who are interested in the same things you’re interested in. It also makes you seek outlets for your creativity and finding that aforementioned undercurrent of valid artistic contribution whether it’s past or present. I would also say that all of our individual interests in music came from a certain amount of boredom.

The Fiddleback: Has coming out of a small town in a mostly rural state posed any obstacles that bands from big cities may not have to face?

AM: There are some obstacles, I suppose, but only short-term obstacles. Being from here made us travel to go find places that would let us play and later wanted us to play their venues. You could say that’s an obstacle, but it also has helped us find the interconnected network of independent musicians, bookers, and associated folks that is the underground music scene.

We love being from here. I feel like our work ethic comes from being from here and working our asses off to make sure we don’t end up like some of the bitter, drug casualty, shitty-job-having-hating people we’ve seen in each of our individual hometowns. Sorry for how dramatic that statement was, I’ve been listening to a lot of Jay-Z.

The Fiddleback: What was playing SXSW like for you?

AM: It’s a noxious mix of equal parts cool, frustrating, and too hot. Austin is a truly awesome town and has some great things to offer. Unfortunately it gets inundated with tight jeans, white vans, and self-importance, and that manages to squash some of its merits. There are a lot of show opportunities, but there’s so much cool stuff to see that a lot of it goes unseen. We were more involved with the unseen part. You do meet a ton of cool people and develop some lasting relationships, which is nice. Overall, I would say that the juice probably isn’t worth the squeeze for us at this point. We’re going down to Austin in October when the record comes out and I think it should be fun. Less white vans hopefully.

The Fiddleback: Speaking of the new record, what’s on the horizon for The Demon Beat?

AM: We have an album that we’re gonna release Sept. 28 at the Huntington Music and Arts Festival. That’s gonna be really cool. We’ll have a tour and some regional stuff throughout September and October. We’re also scheduling some recording dates for late fall, and we’re planning on starting on a new record soon. We’re working with some really good folks on the new stuff and we’re excited about it.