An Interview with Major Jackson 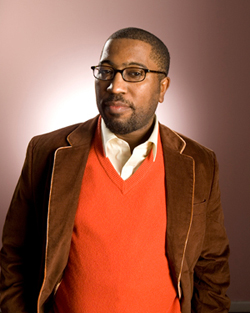 Major Jackson is the kind of poet who’s difficult to categorize. He’s not a “poet’s poet,” whatever that means. He’s not a follower of trends or fixed aesthetics. Though he’s well-known as a member of The Dark Room Collective—an African-American reading series founded in 1988 by Thomas Sayers Ellis and Sharan Strange to promote writers of color—Jackson has always seemed to exist on the fringe by choice. He’s the guy at the party who’s connected to everyone, engaged in every conversation, and somehow wrapped in a private, almost Dickinsonian self-consciousness.

Through his three books of poetry—Leaving Saturn (2002), Hoops (2006), and 2010’s Holding Company—Jackson has cataloged the panorama of the American experience. He writes not only of growing up on the ball yards and street corners of Philadelphia, but also of race, history, politics, philosophy, pop-culture, and the arts. In “White Power,” the fourth poem in Holding Company, Jackson, in the space of five short lines, creates and sustains a political and cultural tension that not only refuses polemics, it also demonstrates the speaker’s subtle complicity in the world he inhabits: “I was twirling a cauliflower floret, / lost in Lewis’s wardrobe of pallid trees, / considering my country’s longing for homogenized milk / & bags of tube socks from Walmart, / which felt cancerous.” If anything, Jackson is a poet of cadences, of form, and wide-ranging expressions.

When I interviewed Jackson this past fall, we discussed his latest book, Holding Company, pop-culture, narrative vs. lyric poetry, and how recursion is a badass writing tool.

The Fiddleback: Your latest book, Holding Company, is comprised of eighty, ten-line poems that present a structural departure from the narrative-driven poems in your first two collections. Were you simply looking for a change of pace or did you find something lacking in the narrative form?

Major Jackson: After a stint of teaching over the course of a few years without the pleasure of composing poems with any sort of steady regimen, I had been awarded a year-long fellowship to write unencumbered at the Radcliffe Institute. As always the case with me, I have a pattern of reaction when such boons arrive which is great exhilaration at having been rewarded and recognized for my work, followed by an overwhelming sense of debilitation and dread that I will produce a scant amount of poems or none at all. Somehow this fear of being exposed as a fraud, or worse, of being inferior to the blessed calling of writing verse, has driven me to read and absorb a great deal of poetry and to embark on writing projects that reflexively teach me something about the art. It’s a kind of obsessive learning in which my pen becomes my tutor. I have the most edifying moments when I am composing a poem.

So, after having been given an assignment to write a ten-line poem by Cave Canem, Inc. on the anniversary of its 10th anniversary, I embarked on my next great lesson and frankly became enamored with the swiftness of thinking and associative leaps inside the short lyric poem. At that time, narrative-driven poems were still important to me, but I really am a creature of curiosity, and believe that we grow when we explore the various modalities of writing poetry rather than limiting ourselves to one standard of style or practice. I could say too it’s a belief in writing poetry as a spiritual, life-long practice, where breathing and contemplating inside language attunes us to a greater self and awareness. I want to grow inside the art, which is a long-winded way of saying, yes, I wanted a change. Writing poetry in different modes has allowed me to renew and fortify my relationship to the art, and by extension, to time. I’m talking about living.

By the way, narrative poems are often robust and textured, so I never find anything lacking when I write a narrative-lyric poem. The question is: how lean should the framing story be? or how efficient is the poem’s contextualization? With the tight, restrained lyric one relies on language to insinuate context or to demolish it all together and hopefully to take flight into song.

The Fiddleback: For me, the meditative and lyrical quality of the poems uniquely illustrates the fragmentary nature of the digital age. Did you consciously try to capture something of the postmodern condition? Is it possible for anyone writing poems in this century to avoid commenting on our collective distractedness?

MJ: I guess it goes without saying that it is impossible not to be psychically affected by our splintered reality; maybe it is inevitable that our imaginative works have embedded in them an allegory of our existence. Philosopher Herbert Marcuse believed as much, and more that “art itself is transformed as part of the superstructure.” But then again, he was a Marxist, who believe the individual is always set in relation to production, machinery, modes of power, and so forth. So it’s not surprising. However, I do not endow such power to the fragment. I fight it; when I was younger I railed that to write a poem of fragmentation was an overt act of privilege and explicit statement of leisure. Those saddled by economic and social challenges, in contrast, do not have the luxury of exalting fragmentation or the postmodern condition; many begin there, are mired in meaninglessness, in fact, many want to move away from the indeterminate void. Thus, their works aim for wholeness. I am not so polemical, anymore.

That’s a curious phrase, collective distractedness, for it idealizes a foregone period in which our lives were simple, and neither technology nor media had such a grip on our lives. A moral judgment is immediately dispensed prima facie with that phrase, which gives me pause. It also has me wonder to what extent we are damaging our ability to meditate and cogitate on that which matters. And yet, I am not sure if the poem is the ultimate antidote, but it might serve as a counteraction, indeed, if more people made reading a poem a daily practice, with the belief that quiet, attentive reading is as important as the break-neck pace of modern life, and read more for contemplative wonder than some hallmark truth, for the basic act of meditation and attentiveness rather than for some answer to life’s quandaries, read for the delight in being engaged by language rather than simply for seeking mere objective beauty.

I think you’re right, though. The age we live implicates all of us and all that we create and desire; and no art is without context. Poems, by design and function, fundamentally haunt the matrixes of social, economic, and digital systems by which we organize our lives. It’s Stevens jar, is it not?

…political poems have to avoid sheer polemics and street sloganeering, (and for that matter, too, pure aestheticism), that is, go to that most daring of artistic representations, which is the stark human soul…

The Fiddleback: Because of its lyrical intensity and unique form, Holding Company reminded me of John Berryman’s The Dream Songs. Is this just my connection, or would you cite Berryman as an influence?

MJ: Probably not directly, no. But he was among a host of others (such as Alice Notley, Anne Carson, Melvin Tolson, Galway Kinnell, many others, and on and on), who wrote long sequences which I had read and absorb with distinct pleasure and great curiosity while I was writing “Letter to Brooks.” The sequence poem with all of its promontories and departures, its comings and goings, is likely to create these lyrical pockets of emotional intensity. So, that’s what we all share. However, I might be contradicting myself because I, in fact, hold an affection for Berryman who probably would not have liked me so much had we dined for lunch.

The Fiddleback: With The Dream Songs Berryman created his own form (three, six-line stanzas) that he continued to use throughout his career. Do you think you’ll return to the ten-line form?

MJ: I think I am likely to move on. In fact, I am returning to the form I begin with the Urban Renewal sequence, sixteen-eighteen liners, loose rhyme, block-like texts.

The Fiddleback: As a whole, Holding Company strikes me a book about desire and love as well as the dissolution of love. But there’s also a political edge to many of the poems. In general, I don’t like overtly political art because it easily becomes didactic. To me, you always strike the right balance between the personal and the political. That said, what do you think makes for a successful political poem?

MJ: Thank you; those are kind words. I guess political poems have to avoid sheer polemics and street sloganeering, (and for that matter, too, pure aestheticism), that is, go to that most daring of artistic representations, which is the stark human soul, in its most pure state, not necessarily undergoing extremis of some kind, but an absolute poignant portrayal of the self against any repressive force, seemingly benign or otherwise, that would deny its humanity. However, it might be too easy to subscribe to the notion that the personal is political because it absolves us poets and artists from directly engaging in a world that all too easily dehumanizes and diminishes souls, undetected because of the cloak of systemic sanctioning, which makes it look normal and acceptable.

The Fiddleback: You’ve always used pop-culture in your work, but in Holding Company you seem especially interested in mashing high and low culture: referencing Prince and Jane’s Addiction on one end, Sartre and Lucretius on the other. What draws you to using cultural references from such opposite ends of the spectrum?

MJ: Since Leaving Saturn, I’ve been unselfconsciously melding my passions. All the music, poetry, films, novels, plays, performances, concerts have such primacy in my imagination—more so than my daily routines and encounters with people in my life, maybe because art marks time more forcefully and ritualistically. I find it hard not to “mash,” as the term goes these days. It would be disingenuous to deny those influences and to create some portrait of myself in poems that is one-dimensional and corresponds to some pre-determined subjectivity I am supposed to inhabit. You’ll get Zizek and Nicki Minaj in my poems, but you won’t get a Kim Kardashian because I do not like reality shows; but Aretha Franklin yes, Bob Thompson, yes. Plus, I guess I never read that memo that comes out each year that announces what is high culture and what is low culture, a perspective on art that I just don’t believe in. Culture is too dynamic for those categorizations.

The Fiddleback: Music always plays a large role in your work. What artists or albums are you digging at the moment?

The Fiddleback: On that same note, what books are you currently reading?

MJ: Slavoj Zizek’s Living in the End Times. I’m still catching up to Anne Carson. Russian poetry for a project I’m working on.

The Fiddleback: Recursion is another device used frequently in the book. Images such as “knotholes” and “broken ground” repeat throughout the four sections. The final poem, “Forecast,” is largely an amalgam of previous lines and images that works to capstone the book as a whole. Did you set out to create this kind of interconnectedness from the start, or did you discover the patterns while writing?

MJ: To be honest, I was teaching Ted Berrigan’s Sonnets, and was like, damn, that’s sweet. There are also other patterns like getting my first name into poems, anagrams of friends names. It was fun to embed some codes for future readers to decipher.