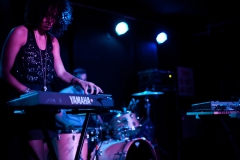 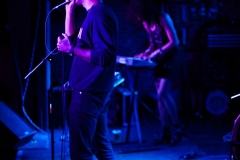 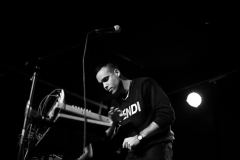 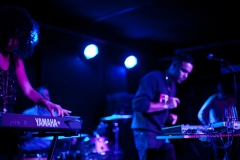 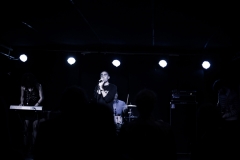 Last October I was invited to a private Halloween party held inside a former furniture factory that included a three-band lineup. This was an important event for two reasons: One, I rarely get invited to parties this hep. Two, the evening marked the first public performance by Latchkeys, a New York-based electronic indie band. Even though they performed with a skeleton crew consisting of singer/songwriter Thomas Gilbert and keyboardist JaKenna Gilbert (a brother and sister duo), they were one of the most captivating bands I have ever seen live.

The Latchkeys don’t have an album I can review or a history I can chronicle, but what I’ve heard in a handful of demos—recorded mostly, I think, in Thomas’s bedroom—manages to be everything at once: minimal and expansive, original and pastiche. The droning bass rhythms and stylish synthesizers combined with Kevin Abbondondelo’s inventive guitar licks and James Buonantuono’s acoustic drums crossed with sequenced percussion, produces a dark and glitzy tone that’s reminiscent of New Order, early Cure, Kraftwerk, and M83. But the songs are much greater than the sum of their influences. While they’re not bending the indie electronic genre in new directions, Latchkeys have created sound that’s every bit as catchy and smart as it is their own.

The Fiddleback: Did you choose the name Latchkeys as a play on “latchkey kids”?

Thomas Gilbert: I definitely grew up as a latchkey kid and so did JaKenna to some extent. We had hard-working parents, so we usually ended up on our own from dawn until dusk—roaming the countryside or riding bikes around our small town or doing crappy chores like laundry and the dishes. I named this project after that feeling of freedom and adventure that comes with spending a lot of time alone from a very young age. That independence was essential in shaping our childhoods and adult lives, but it also led to an inevitable solitude that underlies much of the material we write.

The Fiddleback: How long have you and JaKenna been playing together musically?

TG: Not long. Our Halloween show was our first time playing…that and a couple of practices, but that’s pretty much it.

The Fiddleback: Have you played in bands separately before?

JaKenna Gilbert: I haven’t. The Halloween show was the first time I’ve performed publicly since eighth grade when I played the flute in middle school. Of course, Tom had several projects.

TG: I played in a band in L.A. for a while called The Cartographers. And I’ve been recording mostly by myself—bedroom recordings—since I was 21.

The Fiddleback: Where does your material come from?

TG: Completely. Most of the songs we’re playing I put together in my bedroom from the past year, year and a half. Although Kevin’s parts are mostly his own.

TG: Half are his own; half are parts I wrote that he made better. It’s more fun because the band’s a collaborative effort now, though I can’t stop writing and recording songs on my own. Latchkeys is definitely born out of bedroom recordings, but with a full band, it’s going to be so much better.

…when I’m sitting down and have an instrument in front of me the only thing I can do is write what’s in my head…and I have to figure out how that sound translates to whatever instrument I’m playing.

The Fiddleback: Your sound definitely has a throwback to 80s synth music, but there’s also an aspect of minimalism. Who do cite as influences?

TG: Minimalism was definitely a part of the way I started writing and recording. I did everything lo-fi when I recorded the demos. JaKenna plays a little Yamaha PortaSound synth; I trigger samples with an MPC-1000. Everything started pretty small with basic drum beats, and then I built and built and built, and now these guys are helping me build more. I’m always looking for a sound that’s small and big at the same time. But as far as direct influences go, we’re all fans of M83. My influences were much more minimal before I got into M83, and then I started using more synthesizers and more layering. We’re also into a lot of 90s and early 2000s indie rock. Engine Down is a big influence. Denali. A lot of the Lovitt Records and Jade Tree Records bands.

JG: Tom took me to a Denali show when I was in high school, and they turned out to be one of my favorite bands.

TG: One of my other big influences is Casiotone for the Painfully Alone, which is also pretty lo-fi and minimal. Definitely New Order. I used be a little more Joy Divison-y and post-punky, but I’ve transitioned more into New Wave.