An Interview with Carole Maso 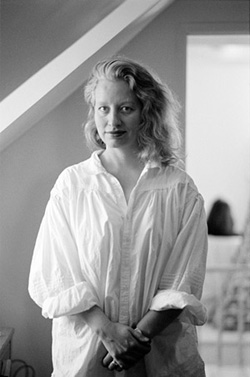 Before I became infatuated with Carole Maso, I groaned. I reread the first three pages of her novel, Ava, too many times with an accumulating frustration that was equal parts self-deprecation and bewilderment. At the time I have to admit I had a literary security blanket; no matter how beautiful or interesting a piece was I needed to be swathed in narrative. I thought reading Wittgenstein’s Mistress by David Markson would prepare me for all experimental fiction to come. I was wrong.

My three-page marathons led me to allege that, contrary to popular notion, Maso must be a renegade poet infiltrating the fiction realm. And I had line breaks and gorgeous syntax to prove it. But again, I was wrong. Maso’s exposure of space on the page in combination with her alluring language, while poetic, is how she settles fiction into a form that better serves the human brain as a landscape. With more traditionally structured prose, there is often a sense of the narrator verbally communicating with the reader. But if the prose is instead mapped out as how a person thinks—as Maso does—readers find themselves inside the narrator’s head. I suppose if there is a backroom or backstage to fiction, Maso has found a way to open it.

Reading Maso, I feel like a psychonaut of sorts, sailing through the passage of text and space. Sometimes Maso gives a sentence the weight of a paragraph, sometimes they’re stories in themselves, and sometimes she incorporates actual images to go along with the text like in her novel, The Art Lover. But what draws me most to Maso is her use of space. Even in her collection of essays, Break Every Rule: Essays on Language, Longing, & Moments of Desire, Maso uses space to communicate and create rhythm.

I recently heard Maso read selections from her new novel, Mother and Child (out July 10 with Counterpoint Press), and talked with her about her work, experiment, and the whole being-a-writer shebang. Interesting fact #1: When she was born, William Carlos Williams was delivering babies in the next town.

The Fiddleback: With Ava you experimented with form in a way that created a space for silences and pauses reminiscent of the playwright Harold Pinter. How can wordless moments inform the reader compared to the ways that text does?

Carole Maso: Empty space and silences function as much as text for me as any other sort of narrative field and should be read. It has presence, takes up space, conveys an enormous amount of meaning—emotion, information, or whatever else depending on the project. It’s one of many things at our disposal as writers. It is often good at reflecting distance, absence, fugitive space. Sometimes it helps with elisions. It’s a charged space and filled with possibility.

The Fiddleback: You are often called an experimental writer and have called yourself a “writer of experiment.” Do you think labels enhance or limit our understanding of contemporary literary trends?

CM: I’m not sure labels enhance or limit in the end. It feels to me they are just ways to categorize, market, make legible, a reading experience so as to make a way for readers to think about, approach or have access to a text.

The Fiddleback: As a writer who’s also a professor of creative writing, how do you feel teaching affects your work?

CM: I find teaching incredibly demanding and draining as it requires me to use the exact same creative resources as it takes to write well, which is why I only teach one semester a year now. It can be exhilarating and engrossing, but it depletes me utterly.

It’s a new world with the electronic possibilities opening up, and I do believe that work outside the mainstream, more and more, will find its place. The hard part and the task is to write it.

The Fiddleback: After receiving a B.A. in English from Vassar, you turned down a graduate fellowship at Boston University. What do you think about MFA programs for writers?

CM: I think the right MFA Program for a certain kind of writer can be a very good thing. Writing programs provide structure, support, company, and offer a kind of sanctioned or legitimized time. It was not the thing for me because I was far more solitary than most and simply incapable of articulating what I was trying to do as most of the time I had no idea, and feared the workshop model given my temperament. I also feared absorbing the values of others, particularly teachers at a certain vulnerable stage in my development. I needed to be out there in the utter wilderness, alone.

The Fiddleback: In your new novel, Mother and Child: A Novel, you refer to your characters as “mother” and “child.” In what ways do you think giving characters more categorical rather than individual names affects the story?

CM: In Mother and Child the figures of the two remained at a certain middle distance, they came no closer; they remained at an arm’s length. They resisted being named. This interested me, the place apart they resided in, but it was not till very late in the composition that I understood why this was. Another question you asked is about the way events: 9/11, having a baby, other things of course have had an impact on my work. Without saying too much, I think both those things have something to do with the formal choices and the distances in this book. It is always about the ways form can speak about experience, that is what I find so exciting. And both 9/11 and having a child have affected the form here. I think that will come clear when the book is read.

The Fiddleback: Did you find yourself experimenting with anything in particular when writing Mother and Child: A Novel?

CM: I was writing from a very strange and heightened state of mind. An event had occurred that had put the world around me into a much starker and I felt truer relief. It felt as if a veil had lifted and what was always before me, but invisible could now be seen. I wrote daily stories from that place. They were childlike in many ways; I felt at the mercy of everything and was probably influenced in part by the bedtime stories I had read my daughter. The book charts a mother and child moving through increasingly dangerous psychic terrain.

The Fiddleback: Publishing The Art Lover was a difficult process due to the incorporation of images along with the text. Do you have any advice for writers looking to get work published that breaks from the mainstream?

CM: Writers should not worry about the publishing aspect of a project until their work is complete, and should try to discard those concerns during composition as it only disfigures the process. It’s a new world with the electronic possibilities opening up, and I do believe that work outside the mainstream, more and more, will find its place. The hard part and the task is to write it.

The Fiddleback: Your forthcoming novel, The Bay of Angels, is said to incorporate all sorts of genre and style. You have said “it feels like the book all my others have been an apprenticeship for.” Do you feel this novel will represent your body of work?

CM: I’m not sure I understand the Bay of Angels question. I can say that all my other books have been a rehearsal to write this one, and that I use aspects of the others in this one. It’s something voracious, oceanic. I’ve already been working on it for fifteen years, and I feel like I probably have about another four years to go. It’s still very much still in progress. It’s a little daunting, but thrilling too.

The Fiddleback: What are you reading now? Anything new? Anything old?

CM: I’ve been reading the novels of Herta Muller, which are quite astonishing. I’m a slow reader and this has been my main reading project, aside from student work, for some time.