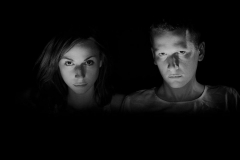 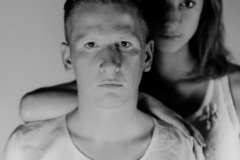 The first thing that audiences might find surprising about Bastardgeist is the surface-level disconnect between their name and their sound. The name brings to mind something loud, angry and fast. The members of a band called Bastardgeist, one might presume, could be found wearing ripped leather jackets with spikes and patches, combat boots, and maybe a mohawk or two. Bastardgeist embodies none of this, yet, upon hearing their music, the name makes perfect sense. By combining Bastard with the German word for spirit, or ghost, or mind, the name evokes a sort of ethereal displacement—a sense of not quite belonging, of being of another world. Along this line of thought, Bastardgeist is the perfect name for the band’s beautifully haunted and elegantly understated compositions.

My first encounter with Bastardgeist came when I stumbled across a video of the band’s driving force, Joel Midden, performing with Ruth Barabe, another of the quartet’s members. The two are standing in the lava plains of Hafnarfjörður, Iceland, wrapped in winter coats singing together, softly, while Midden plays a looping melodic line on his kalimba. The song they perform in the video (watch it here) is called “Cabbageheads,” and, despite the rain and wind, the performance is stunning. Midden’s composition is fragile and immediate, the duo’s performances exposed and a little bit raw, but refined.

The same spirit that pervades that intimate live recording can be found woven through Bastardgeist’s self-titled debut album released recently by Brainlove Records. The album finds Midden’s compositions balanced between quiet minimalism and a grandiose but graceful maximalism: off-kilter percussion and incantatory vocals give way to lo-fi kalimba melodies; heady drones and euphorically messy rhythms give way to quietly plaintive tones and choruses of buried voices. From start to finish, Bastardgeist is a daring and soulful set of songs, an artistic statement that manages to be both full of and fulfilling its own promise—all in the band’s first breaths. I recently had a chance to exchange some emails with Bastardgeist’s Joel Midden and ask him about the project’s origins, its influences, its processes, and its future.

The Fiddleback: Let’s start with basics—When did the project begin and what was its impetus?

Joel Midden: Bastardgeist started as a bunch of solo recordings I had been making around 2004-05 that I didn’t know what else to do with. Most of my experience playing music up to that point had been making loud noises in punk or improv bands, and I wanted to do something quieter and more deliberate.

The Fiddleback: I hear many different influences in Bastardgeist’s songs. Electronic music, various post-rock bands, minimalism—compositionally speaking, what would you say most informs your sound?

JM: There are probably a million different touchstones I could point to for any given song, but at this point, especially because there are other people involved, I mostly try to write what I think will translate well within a band context and/or play to our strengths as a band. Often times there will be a specific visual or emotional cue that crops up and cycles around in my head while I’m working on something. But in general the thing that compels me to sit down and write something is still half compulsion, half misplaced sense of obligation.

The only thing that’s really followed me the whole way through is this sort of futile nostalgia that everything else revolves around.

The Fiddleback: The self-titled album features a number of interesting textures. The one that first comes to mind is the Kalimba. How did that instrument become so central to some of the album’s songs?

JM: When I first started to experiment with writing songs I specifically sought out a kalimba, because I had a something in mind I wanted to write with it (dahdahs). In the process I sort of accidentally wrote like two other ones. It was a great tool at the time, because it’s such an immediate and intuitive instrument. But it still sort of forces you to think about what you’re doing in an unfamiliar way. I don’t use it as much now as I used to, maybe partially because I’ve become too comfortable with it.

The Fiddleback: In researching your band and music, it seems that you might be pretty popular in England. How do the reactions to your music differ between here and there? How did you establish and maintain a presence across the seas while based out of Chicago?

JM: I don’t know that I’ve played abroad enough to have really observed very many endemic differences between American and British audiences. I’ve played shows that went really well in one city and then played shows that went not as well in the same city on a different night. I guess in general people seem to give more of a shit when you’re abroad. The cynic in me tends to think that has something to with the exoticism of being foreign, and maybe even specifically American. But there’s also maybe more of a culture of appreciation for that sort of thing too. I’m not really sure. The guy who runs our label, John, is a full-time promoter in London and he works really hard to keep the label’s name on people’s minds. I’ve also toured overseas a lot more than I’ve played in the states. So that’s probably got something to do with it as well.

The Fiddleback: In listening to some of your newer songs on SoundCloud, I’m hearing a very different approach. The demo for “Nothings” is a very subtly layered pop song while “Cast Away” has an almost R&B edge to the vocals. Both songs seem to indicate a dramatic shift from the first album’s moody atmosphere to a slightly brighter pop sound. First, I guess what I’m asking is how you might characterize these new songs? Second, how have you approached this new material differently, and did you have a specific vision for the new songs?

JM: Pretty much every notable change in the overall sound of the music is attributable to outside factors like people joining the band or moving from one place to another and losing a bunch of equipment or learning a new recording technique or having access to a different space. The biggest difference I think people hear right now is that a lot of the newer songs are much more laptop based. In fact, I think the only thing that’s really remained constant through the whole thing, and why it can still can have the same name and make sense, is that the tone of the songs and the voice or identity at the center of them remains the same. I tend to change my mind like I change my pants. One day I want to do the campiest biggest pop anthem imaginable and then next day I want to only ever make ugly drones for the rest of my life. The only thing that’s really followed me the whole way through is this sort of futile nostalgia that everything else revolves around.

The Fiddleback: What is on the horizon for Bastardgeist? It seems you’ve got new songs in progress—what are they and where will they end up? What else is the band looking forward to?

JM: We’ve got a ton of new songs written several of which we’ve been playing out live. We’re sort of in the process of figuring out the best way to go about making them available. There’s a music video and some remixes in the works as well. I’m not sure exactly how much I should say about them at the moment. But I am going back over to the UK and Spain in October, so if you find yourself in Madrid, look me up.