See You Soon by Rachel Harrison 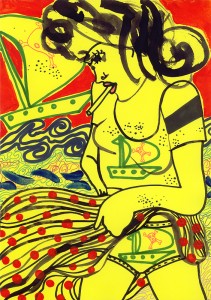 You fall in love with a ghost hunter. You meet him at the séance of a mutual friend. He’s charming, has dimples, makes you orgasm, explains ectoplasm. He assures you that your apartment isn’t haunted. You believe him.

He has a lot of sad stories. Stories of lost spirits, sick children tucked in their deathbeds crying out for parents who can’t hear. Jilted brides twirling in white dresses, tears falling from their eyes, nothing but mist. Civil war soldiers in the uniform of the losing side missing limbs, eyes, fragments of skull, wandering fog-ridden marshes in search of a home no longer there.

He says, “It’s my job to find them and help them cross over.”

You can’t think of anything more noble.

You confide in a co-worker.

She scoffs, says “I don’t believe in ghosts.”

“They don’t believe in you.”

You don’t want an accountant.

He travels a lot and it’s hard. There’s always a haunted house in Missouri, an abandoned asylum in Maine. You miss him gutturally. You cry in restaurants, in the orange tunnels of light under streetlamps, sitting on random curbs. In Victoria’s Secret dressing rooms, in traffic you get yourself in on purpose. You avoid being home alone. You never used to be scared to be alone, but now that you know all there is to be afraid of your paranoia is acute. You go to bed with the lights on, pull the covers over your head, repeat Hail Mary’s, plead for the presences to spare you. You’re not even sure there are presences there, it’s a precaution. A preemptive prayer.

He’s the only one who knows how to keep you safe, your only line of defense against the darkness.

When he comes home he holds you through the night, calls you angel, baby. He pushes your hair out of your eyes and holds your face when he kisses you.

And then he has to go again. There’s a poltergeist in a house in Montauk terrorizing the rich family summering there. It roughed up the nanny and she quit, threatening a lawsuit.

“Never trust a man who travels,” your co-worker says when she finds you sobbing in the handicap stall.

“Fuck you,” you want to say, but then she would leave and you would be alone, so you say nothing and keep crying.

You ask him to take you with him on a job.

“Too dangerous,” he says.

In your head you make a joke about having to kill yourself for his attention, only you don’t find it funny.

“Where’s the most haunted place you’ve ever been?” you ask.

“Do you ever get scared?”

“Have I been dead this whole time?”

There are things you learn, like it’s okay to make Ghostbusters jokes but not Scooby-Doo. Like Ouija boards are hazardous and John Edwards is a hack.

Like one day he wants to open a museum and settle down. You think, house, dog, kids, me, me, please, me.

You tell him, “Sometimes I think you don’t want to be happy.”

“Doctor, lawyer, I’m telling you,” your co-worker says. “Quit while you’re ahead.”

It’s depressing work, dealing with the restless dead. Sometimes when you’re with him his eyes go glassy, abandon you for an apparition beyond your periphery. Sometimes you wake up in the middle of the night to his erratic breathing in your bed. He’s stuck in some nightmare and you debate waking him until you fall back asleep. Sometimes he doesn’t answer your calls, your texts, and sometimes he does but he’s distant. When you ask, “What’s wrong?” sometimes he says, “nothing,” but other times he says, “job takes its toll.”

You become disinterested in his ghost stories. Listening to them has become a chore. You try to change the subject but he gets salty.

You find yourself thinking about the museum he wants to open, the one full of ex-possessed porcelain dolls, macabre mannequins, cursed music boxes, the bed curtains some famous writer died behind. You try to picture yourself there, selling tickets to goth teenagers and lost road trippers. You visualize yourself among its artifacts, in your yellow dress with the sunflowers, your hair in braids. You don’t belong. And you don’t want to.

Everything becomes heavy, the image melts like a Dali clock. The weight collapses in on itself and you realize you don’t want to be with him anymore.

You think on it for a few days. You wait for it to pass, for him to come by and kiss your neck the way he does and eviscerate all doubt. Underneath the hope is experience, the knowledge that once the seed is planted it’s already too late.

You call him and say, “I don’t think we should see each other anymore.”

He sighs. He’s not surprised.

“This is why I never say it back,” he says. “This happens every time.”

When he’s back in town he stops over to pick up the stuff he left at your place. A spare camera, boxer shorts, supplements, hair gel. You watch him gather his things and put them in a plastic bag and think, why doesn’t anyone talk about how painful it is to fall out of love?

You open beers, a gesture of good will, no hard feelings. He accepts and you drink them together on the stoop.

You want to apologize again. Instead you ask him all of the questions you were too afraid to when you had skin in the game.

“Where do the ghosts go after they cross over?”

“Have you ever cheated on me?”

“What’s the worst thing a ghost ever said to you?”

You clink the bottle against your teeth. You reach out for the reality of what life will be like without him. You wonder if his absence will take up space and if so, how much. You can’t grasp the concept of gone. Then again, neither can he. He’s made a career out of it.

You have another question. You ask,

Rachel Harrison lives and writes in Brooklyn, NY. Her fiction has appeared in WhiskeyPaper, Cease Cows, Wyvern Lit, and elsewhere. 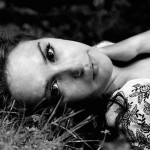